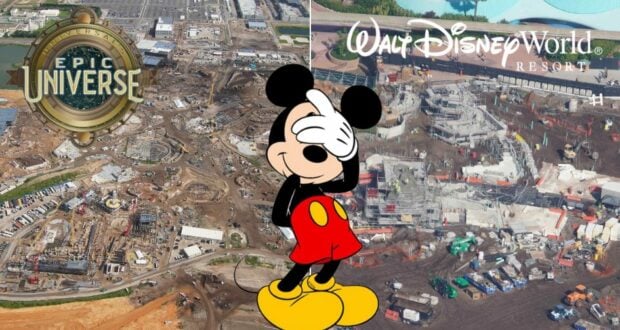 An Embarrassing Update: Universal’s New Park vs. One Disney Attraction

Our love for all things Disney could never be overlooked! But… sometimes… just sometimes, even we feel some Disney fandom embarrassment – especially when it has to do with the Walt Disney World Resort’s theme park competitor, Universal Orlando Resort.

We all likely know by now that Magic Kingdom Park’s TRON Lightcylce Run roller coaster has already taken longer than the entire Magic Kingdom Park to be built before it opened in 1971. Plus, now that Disney has revealed it will open in “Spring 2023,” this means it will be a total of 6 years since it was announced in 2017 to have the single attraction completed. Yikes.

As we take a look at the massive overhaul underway to EPCOT, all eyes are on the enticing new attraction coming to EPCOT’s World Nature neighborhood, called Journey of Water Inspired by Moana. We know the Disney experience that was first announced in 2019 will feature a 16-foot Te Feti, but as far as an opening date goes, Disney has revealed “late 2023.” That will mean 4 years for a single attraction… still better than the 6 it is taking to build Tron.

But, just down the road in Orlando, Florida, Universal Orlando Resort is already breaking ground… very quickly… on its brand new theme park called “Epic Universe.” We’re not just talking about one ride, but an ENTIRE theme park which was also first announced in 2019.

To show the level of speed in progress on Universal’s new theme park versus EPCOT’s one single Moana-inspired attraction, check out the 5-month difference between the two.

Check out the differences in the Epic Universe photos in just 5 months:

Now, we jump over to Walt Disney World Resort and zoom in on EPCOT’s Journey of Water attraction. @bioreconstruct notes, “Construction progress of Journey of Water in past 5 months. Rock work added, paint is underway in an area. Service buildings in progress. Apr 3, Sept 10, 2022.”

Check out the differences in the single attraction, Journey of Water, photos in 5 months:

To give an even deeper look into how slow it seems like Disney is moving on construction plans recently, @bioreconstruct also adds a comparison of Universal’s popular VelociCoaster which Universal had permits filed for in 2018 and opened to Guests in 2021 (and that was with a COVID pause in 2020).

@bioreconstruct notes, “A look back at construction of VelociCoaster. In five months time, large rock work added and painted. Some trees also added. In addition to the roller coaster itself. May 4 and Oct 4, 2020.“

In five months, it seems like Universal is routinely able to produce quicker results compared to the Disney giant:

Ouch. It’s hard to watch the Disney construction crawl when Universal seems to have the upper hand in producing new, exciting experiences for its Park.

Meanwhile, at the 2022 D23 Expo, Disney went a different route with its announcements. Instead of giving anything concrete, it announced “What If” ideas that included a “possible” expansion at Magic Kingdom Park, including a Coco Land, Encanto Land, and Villains Land… but it was regularly clarified by Disney that these ideas were all hypothetical and nowhere near being ready anytime soon. 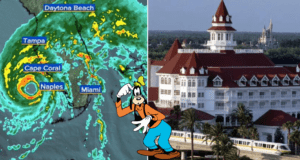