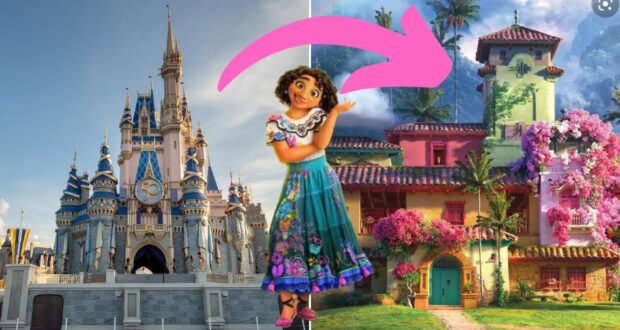 The 2022 D23 Expo has come to a close. The Expo gathered Disney fans from around the globe as it dropped new entertainment and Disney experiences as we look to the future of The Walt Disney Company. But, what intrigued many was the surprise announcements that landed at the end of the popular Parks Panel.

Immediately, the audience (and we were there) was confused as the panelist kept repeating that these are “what if” ideas that are “not planned anytime soon.” So… yes, that was odd right from the start.

But, nonetheless, Josh, Chris, and Jennifer threw out big plans for Walt Disney World Resort’s Magic Kingdom Park. Just behind Big Thunder Mountain Railroad in Frontierland, they announced a “potential expansion” that could include Coco, Encanto, and a Villains Land. The crowd went wild with cheers!

After Chris Beatty revealed the news of a Coco addition, Jennifer Lee said, “What if we DO want to talk about Bruno?” Jennifer went on to say, “There are many of us at Disney animation who cannot wait to see more Encanto at Disney Parks.”

She further notes that no one could bring a magical house to life like Disney Imagineering, with “What if you could walk into the Madrigal’s Casita, just saying, meet the family. What if Mirabel is your guide introducing you to all the wonder within those walls? Bruno’s tower, Antonio’s room, all of it. What if you could step up to a door and discover your own magical gift?”

But wait, those “what if’s” went one step further with a Walt Disney Imagineering art rendering of the expansion behind Big Thunder Mountain with a visual of the three lands, including Coco, Encanto, and Villians Land looming in the background:

Spot the Casita sitting on the right at the top of the hill in the photo above? Very intriguing indeed. But, will this great plan come to fruition? Honestly, we’re as perplexed by the hypothetical news from Disney as everyone else!

Our thoughts are that Disney truly is making plans for this expansion at some point down the road. With the fan disappointment from the several parts of the 2019 D23 news being scraped, such as Mary Poppins in EPCOT and Spaceship Earth’s update, along with the 6 years it’ll have taken before TRON opens, we suspect Disney is attempting a new marketing technique that, honestly, is a flop.

Check out the YouTube video below by Inside the Magic for a further breakdown of these three “possible” lands coming to Magic Kingdom:

As usual, we will be sure to keep Disney Tips readers updated as we learn more about this potentially big news of expansion.