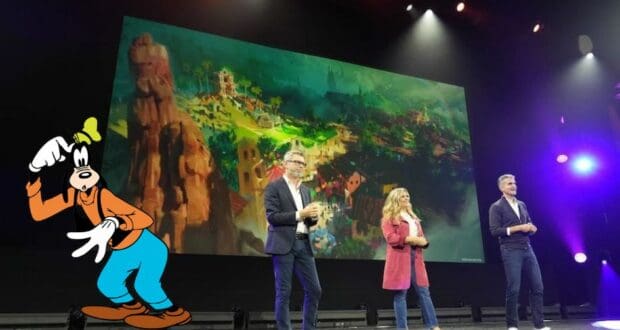 Disney’s “A Boundless Future” panel presented by the Chairperson of Walt Disney Parks and Resort, Josh D’Amaro was set to end the 2022 D23 Expo with a bang. But, instead of Disney fans being thrilled with what was shared, many were left with a lackluster feeling.

The Parks Panel is one every Disney fan tries to get into at Hall D23 in the Anaheim Convention Center. It’s the last major panel of the Expo, and Disney has been known to drop a TON of news that leaves fans highly anticipating the future of the Disney Parks and Resorts around the globe.

The swing and miss for the Parks Panel on Sunday, September 11, 2022, was Disney’s lack of commitment to the biggest news pieces it shared.

Tangible announcements were made, such as Disneyland’s returning parade, new nighttime spectaculars, and Big Hero 6 space at Disney California Adventure. At Walt Disney World, fans were surprised with the news of the return of Happily Ever After, a replacement coming for EPCOT’s Harmonious, and a new addition to the Haunted Mansion.

The BIGGEST pieces of news that were announced left fans shocked but were oddly delivered without any concrete timeline or clear direction.

RELATED: The Disney Legend Panel Fail No One Is Talking About

For example, Disney threw out the news of DinoLand U.S.A. at Disney’s Animal Kingdom being remodeled but teased it could become Zootopia OR Moana themed with some art rendering possibilities by Disney Imagineers.

And it just got stranger from there. Disney announced they are most likely adding a Disney Villian’s Land, Encanto, and Coco-inspired spaces behind Big Thunder Mountain at Magic Kingdom Park. The news received several cheers… but D’Amaro made it very clear it was far off with no dates or timeframe announced. Again, a Walt Disney Imagineering art concept was revealed.

@ScottGustin took to social media after the panel wrapped up asking about presentation thoughts and the fans were quick to respond.

The response consensus was overall a feeling of “Meh” and “Disappointment.” One comment notes, “After canceling so much of what was announced at previous D23, it kind of stinks if their new plan is to make announcements in hypotheticals so they can underdeliver without necessarily having to backtrack.”

The feeling of lack of concrete news continued with one fan response being, “Strange that there aren’t firm timelines or details about any new attractions at Walt Disney World.”

Another fan notes, “Disappointed in myself for even wasting my time watching that cluster…. If I were Disney and Joshy D….I’d be embarrassed. Should have changed the title and did a retrospect of the parks….”

@AsheyLCarter1, who was invited by Disney to join the media coverage, notes, “Now that I’ve finished writing and have had a chance to take in the parks panel, the last 20 minutes of the presentation were…odd. I’m glad ideas are being thrown around for Disney World, but like don’t tease me with “maybe,” “might,” “don’t you wish this would happen.”

Furthermore, Disney even adds to the confusion by calling the announcements “what if” news as follows:

“Chris and Jennifer discuss early concept explorations for Dinoland U.S.A. at Disney’s Animal Kingdom Park and potential expansion opportunities beyond Big Thunder Mountain at Magic Kingdom Park at Walt Disney World and even offer some creative “what if” ideas.”

So, yes, while news of a Villians Land, for example, is intriguing, the announcement made it feel like it was just a topic for discussion rather than an announcement with art renderings that were repeatedly noted as being very early in the thought process.

We’ll be keeping an eye on these future, possible projects. We suspect if the projects do pan out for Disney, they are YEARS away from completion. It will have taken Disney 6 years to open TRON, after all… and that’s just one ride.