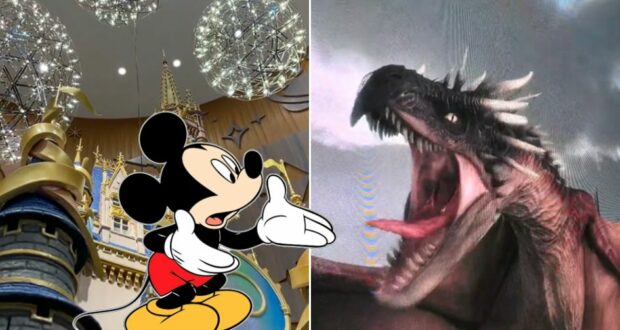 Big news for Orlando, Florida! The Orlando International Airport has announced its new Terminal C is officially open! The airport expansion allows for more travelers from around the world to experience Orlando travel in a seamless, modern way. And, yes, Disney and Universal are getting in on the fun!

Orlando International Airport (@mco) took to social media to share the first look photos and video of the stunning terminal:

With Orlando bustling with entertainment, of course, the two biggest theme park giants, Walt Disney World Resort and Universal Orlando Resort, were sure to put their mark on the new terminal with new storefronts within the terminal.

Walt Disney World held its official opening of the airport’s Disney store, and as you’ll see in the photos and video below, it’s stunning… but not to the same level as Universal’s store.

Orlando International Airport (@MCO) took to social media on September 21, 2022, with news and photos of Disney’s new store in Terminal C, noting, “This morning, @WaltDisneyWorld held an official ribbon-cutting ceremony for their brand new store at our Terminal C located in the Palm Court area! Cast Members were smiling from ear to ear to welcome travelers into the magic!”

As you can see in the video tweet above, the store is full of magical details as it shimmers and glows with Disney magic, including a replica of Magic Kingdom Park’s iconic Cinderella Castle. There is plenty of fun merchandise that is perfect to shop for while catching a flight to or from Walt Disney World Resort.

But wait… we see you, Universal! While, yes, Universal Orlando merchandise is great, nothing can beat Disney’s shop, right? Well, there is a show-stopping experience at Terminal C’s Universal store that can’t be ignored.

Orlando International Airport shared a video of an incredible screen experience within the Universal store, noting, “For even more magic, head to the 2nd floor of the store & explore The Wizarding World of Harry Potter! Find merch to rep your favorite Hogwarts house & encounter a fiery display along the way!”

Check out the firey dragon video in the tweet below:

While we have no doubt Disney’s storefront will be a popular one for all the latest Disney merchandise, we can’t help but be eager to hurry over to Universal’s store to see this dragon in action. Not to mention the amount of social media presence this feature wall will get from travelers visiting the store and sharing the excitement with friends and family.

Well done to both of these theme park giants! We are impressed, however, that Universal was the one that took the impressive technology idea to the next level.