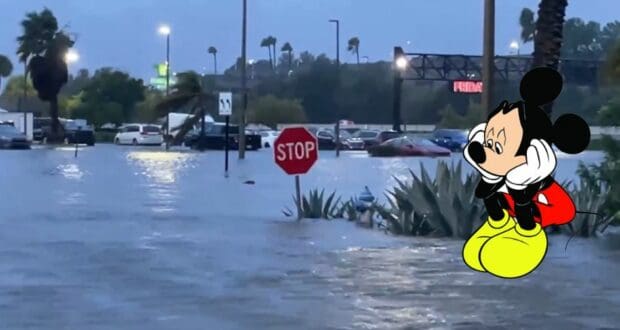 Hurricane Ian drenched Florida, leaving much destruction in its path as it made landfall on the southwest coast on September 28, 2022, then slowly crawled over the Sunshine State into the Atlantic. As the Orlando area wakes on the morning of Thursday, September 29, videos of Central Florida flooding are being shared.

Walt Disney World Resort announced the closure of its theme parks on Wednesday, September 28, and Thursday, September 29, 2022. While the Parks are closed, there are still Resort Guests on the property. Guests are being provided with hurricane meal kits and special character meet and greets as Disney works to make the most out of the situation.

Early this morning, we reported flooding at Walt Disney World’s Swan and Dolphin Resort Hotel. Thankfully, there have been reports of power remaining on and from Guests sheltering within the Walt Disney World bubble.

Outside the Disney property, the now downgraded Tropical Storm Ian packed heavy rains, causing major flooding. As shown in the video below, flooding captures in the early hours of the morning a Save A Lot in Kissimmee, just minutes from Walt Disney World:

RELATED: VIDEO – Cheers Erupt as Disney Fans Get an Extra Day at Sea Due to Hurricane Ian

Here’s another video surfacing this morning in front of the Double Tree by Hilton. This hotel is located just outside of Walt Disney World’s neighboring theme park competitor, Universal Orlando Resort:

Of course, Disney Guests should NOT be attempting to drive anywhere this morning. Footage on September 29, 2022, also shows the new I-4 Express lanes flooded, making travel in and around the Orlando area unsafe:

RELATED: Disney World in a Hurricane – How Much Damage Has Actually Happened?

There are talks that Disney Cast Members are being informed that Walt Disney World will extend its closure into Friday, September 30, 2022, but this has yet to be confirmed. With the videos above, however, the news of extended closure would not surprise us.

We are especially curious to see how the Disney Parks held up as we’ve seen heavy rainfall cause flooding within the Parks regularly. As always, we will be sure to share details as we receive them. In the meantime, keep an eye on Disney’s Weather Updates & Information page. Stay safe, Disney fans!