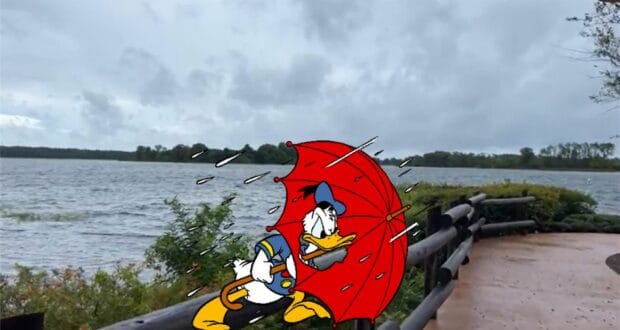 Earlier this week, Tropical Storm Ian became Hurricane Ian. While the path of the hurricane was uncertain for some time, it has now made landfall on the southwest coast of Florida as a Category 4… with winds nearing a Category 5 status.

The impact of Hurricane Ian will likely be catastrophic for the Florida coast, with storm surges, damaging winds, and flooding largely expected.

With the heart of the storm having yet to impact Walt Disney World Resort, one Disney fan took to social media to share a video from the beloved Disney’s Wilderness Lodge Resort. Check out Streaming the Magic’s live video below as they explore the stunning Resort, spot a few special character sightings, and share hurricane preparation news:

RELATED: Disney World in a Hurricane – How Much Damage Has Actually Happened?

Walt Disney World Resort is prepared to support Guests with special hurricane meals and has made the proper accommodations for those at its Disney Resorts. Furthermore, Disney is sending push notifications to Guests to alert them of any Hurricane Ian updates for the theme park.

As Hurricane Ian continues to disrupt seemingly every corner of Florida, we will be sure to share Disney Tips updates. In the meantime, stay safe, Disney fans!

2022-09-28
Jamie Sylvester
Previous: Refund Details for Mickey’s Not-So-Scary Halloween Party Cancelled Due to Hurricane Ian
Next: EPCOT’s Figment… The Movie? We Aren’t Making This Up