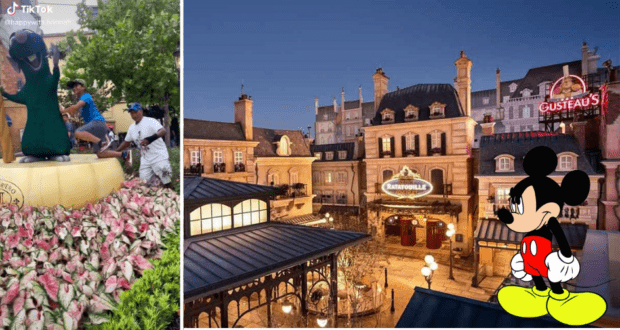 Another violation of Walt Disney World’s Property Rules was caught on camera yesterday at the France Pavilion in EPCOT, and this one is angering Disney fans. Several TikTok videos were created in response to the shenanigans, expressing disapproval over the disrespectful display.

The incident occurred at the adorable Remy statue, sitting in front of the Plume et Palette. A short video captured by @happywith.hannah shows two Guests climbing over the fenced-in area.

The statue features the beloved little rat from Ratatouille (2007) in his chef’s attire, standing on top of a cheese block. After disregarding the fence, which should have alerted them that the area was off limits, a young man can be seen trespassing over a beautifully landscaped area, climbing on top of the statue.

A parent accompanies the minor as he seems to be preparing to take a photo. In all fairness, children can’t really be blamed for incidents like this. Parents are responsible to make sure their kids abide by the rules and behave appropriately.

Once the parent sees the camera recording him, it’s almost as if he’d just become aware that his actions may be frowned upon. A Cast Member immediately alerts the them that they are not allowed in the area, and they disembark, leaving the location.

Some Disney influencers were not so forgiving in their assessment of the situation. Former Walt Disney World Cast Member and fellow TikToker @the3.mouseketeers shared that the Guest’s behavior was disrespectful, and totally disregarded others.

Text on her video proclaims, ” I hope you get banned!!!!” Another Tik Tok creator, @pineappleprincess340 questioned the strange changes in Disney Guest behavior since the pandemic, calling for a study to be done.

She acknowledges the fact that Disney is not the only theme Park struggling with foolish conduct. So, is there more bad behavior at Disney Parks, or are there just more people capturing it on camera? What do you think?