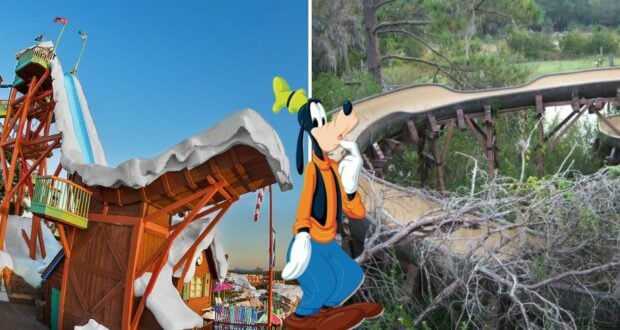 Is Disney’s Blizzard Beach to Become the Next Abandoned River Country?

Summer has arrived, and while typically Disney fans are hurrying off to both of Walt Disney World Resort’s Water Parks, including Typhoon Lagoon and Blizzard Beach, Summer 2022 leaves us with only one Water Park option. But, is Blizzard Beach to become the next River Country? We think NOT!

Even though Blizzard Beach did reopen after COVID closures, it closed again on January 1, 2022. Some fans, however, can’t seem to shake the refurbishment memories of Walt Disney World’s former Water Park, River Country.

Disney’s River Country was Walt Disney World’s first Water Park which closed in November 2001 only to never open again. Located along the shores of Bay Lake and near Disney’s Fort Wilderness Resort & Campground, the Water Park now sits abandoned, overgrown by the lush landscape. The Park was seemingly left behind and completely forgotten.

We previously shared that Walt Disney Imagineering has filed a permit that could mean long-term refurbishment, changes, or an entirely new attraction. Even more encouraging are new photos showing the beginning signs of unknown work underway.

In the photo below, @bioreconstruct notes, “Left and center arrows in this aerial at some of the work in progress during refurbishment of Blizzard Beach. The clearing seems to be a staging area. Right arrow at a sidewalk along Buena Vista Drive.”

Here’s an up-close photo of the staging area:

Another photo shows items set aside in the staging area:

Blizzard Beach doesn’t look like an abandoned Disney Water Park at all with this aerial look at scaffolding work near a Blizzard Beach waterslide below. We suspect Walt Disney World Resort wouldn’t be working on a Park it plans to abandon but rather is looking to create an exceptional Disney experience for the future.

While we do believe big changes are coming to Disney’s beloved Blizzard Beach, all signs point to the Water Park coming back better than ever. Hopefully, Disney will have some news to share soon about what’s to come for Blizzard Beach to snuff out any River Country repeat fears. Meanwhile, be sure to snag a ticket to enjoy Typhoon Lagoon Water Park this sunmmer!