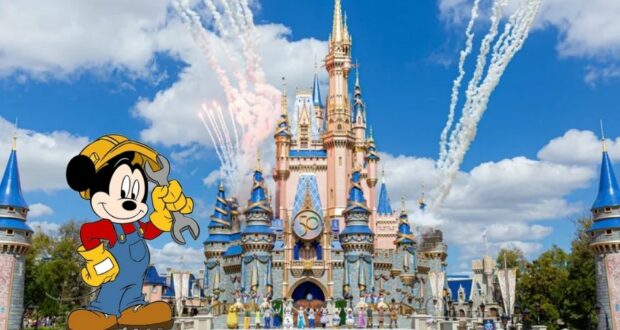 Goodbye May… hello JUNE! As Walt Disney World fans flock to the Parks this summer, take note as we share a few refurbishments and closures you’ll want to be aware of before you go.

The Disney Parks are welcoming Guests with all sorts of summer experiences. At EPCOT, Guests can finally take a ride on the highly-anticipated Guardians of the Galaxy: Cosmic Rewind coaster in World Discovery. Guests will also find the recently opened Connections Cafe and Eatery for yummy quick-service options and Starbucks coffee.

Over at Magic Kingdom, Guests may not be able to enjoy TRON Lightcycle Run just yet, but we are thrilled with the return of the Festival of Fantasy Parade. Plus, Disney recently added a Belle meet and greet to its “temporarily closed” Enchanted Tales with Belle in Fantasyland.

At Disney’s Animal Kingdom, Expedition Everest is once again open after a lengthy refurbishment earlier this year, and Disney is once again preparing for the return of Tumble Monkeys and the Flying Birds at the Festival of the Lion King.

Let’s not forget about the excitement at Disney’s Hollywood Studios with fans rush in to experience favorites like Star Wars: Rise of the Resistance, Slinky Dog Dash, and Mickey & Minnie’s Runaway Railway.

There are however some experiences to note as you make your Disney Park getaway plans. Let’s kick off the list with a beloved Disney Water Park.

One day, we’ll be able to take Walt Disney World Railroad at Magic Kingdom Park off of this refurbishment list. The attraction has been closed since December 3, 2018, to make way for TRON Lightcycle Run construction in the Tomorrowland portion of the Park. When will the train resume schedule? We have seen construction progress but the reopening is still a mystery.

EPCOT is preparing to welcome the EPCOT International Food & Wine Festival beginning July 14 – November 19, 2022. With the incoming Festival, Disney has announced the closure of Canada Far and Wide in its World Showcase Canada Pavilion beginning June 27, 2022. The attraction typically closes during the Food & Wine Festival to make way for a Global Marketplace in the theater space. Last year, Appleseed Orchard Marketplace took up residency in the attraction space.

If you’re a Disney Vacation Club Member, take note that the DVC Member Lounge at the top of Bay Lake Tower at Disney’s Contemporary Resort is currently closed. The popular DVC lounge is currently being reimagined. Details of what the reimagining will entail and when the Disney Resort lounge may reopen have yet to be announced.

Disney’s beloved Deluxe Resort Hotel, Disney’s Grand Floridian Resort & Spa is currently undergoing refurbishment. The Resort is adding new Disney Vacation Club Villas to a portion of the Disney Resort Hotel. The construction began on March 1, 2022, with no competition date revealed just yet. Disney has said however that the new DVC Villas are scheduled to be available at some point this summer. Guests of the Resort may hear construction during daytime hours.

Disney is also planning to reimagine its current Narcoossee Restaurant. Previously, Disney noted the refurbishment will begin on June 18, 2022, with June 17th being its final dining service. Now, the calendar shows Narcoossee’s remaining open through July 4, 2022, likely to allow Guests to enjoy the 4th of July fireworks from the restaurant windows.

Disney’s Grand Floridian Resort isn’t the only Resort Hotel getting a facelift. Disney has announced the closure of the former Spirit of Aloha Dinner Show as it prepares to undergo construction on its new Disney Vacation Club Tower. Further details are slim but Guests have already started seeing early signs of mapping out construction at the Resort.

RELATED: Here’s Why EPCOT Is Closing Early in June

What’s on the horizon for Walt Disney World Resort? EPCOT’s transformation of its four neighborhoods is well underway as Journey of Water Inspired by Moana is the newest attraction we’re keeping our eyes on as it’s in the early development stages.

A Disney’s Animal Kingdom, Guests are awaiting eagerly the opening of the newly designed Finding Nemo show in the DinoLand U.S.A. portion of the Disney Park. The new show, Finding Nemo: The Big Blue… and Beyond, will be ready to welcome Guests in “Summer 2022”.

Over at Disney’s Hollywood Studios, we’re awaiting word on when the nighttime spectacular, “Fantasmic!” may return. Disney has promised 2022, but we still don’t know exactly when we’ll have a chance to watch Sorcerer Mickey battle against the Disney Villains.

As always, be sure to keep an eye on the My Disney Experience app regularly as refurbishments and closures adjust and change. We’ll see you at Walt Disney World Resort in June!