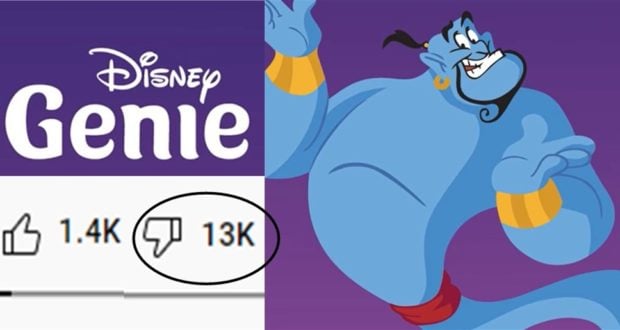 Well, Disney fans, how are we all doing? It has been a long FIVE days since Disney announced the new Disney Genie making its way to Walt Disney World Resort and Disneyland Resort this fall. While we haven’t heard many complaints about the complimentary Disney Genie app, we have heard many (MANY!) complaints about Disney replacing the former complimentary FastPass program with new paid Disney Genie+ and the Lightning Lane. We’re hearing it’s complicated, it makes no sense… and most of all, it’s more money to be spent at a Disney Park. Well, if you’re feeling disappointed in Disney’s decision to roll out the Disney Genie and added upcharge for the former free FastPass, you aren’t alone. In fact, fans have spoken and there is an overwhelming dislike when it comes to the new Disney Genie rollout.

In the Disney Parks YouTube video reveal you’ll see in the screenshot below, the massive number of dislikes Disney’s post received compared to likes. OUCH.

And the YouTube video isn’t the only spot where Guests are obviously not happy about the change. Just check out any one of Disney’s social media networks to see a large number of comments and angry faces about the Disney Genie. For example, the Facebook angry face takes over Disney Parks Blog Facebook post as shown in the screenshot below:

With the reveal of the Disney Genie, we also learned more news that seemed to disappoint the Disney fan world. EPCOT’s newest attraction, Remy’s Ratatouille Adventure, will be a virtual queue only OR you’ll be able to pay to ride. Just like Star Wars: Rise of the Resistance, there will be no standby line for these two attractions. But you can pay to ride if you don’t get a virtual queue in time.

Need a brief rundown of what the Disney Genie, Disney Genie+, and Lightning Lane selection mean for your Theme Park experience? Check out our breakdown of the incoming Disney services here. When Disney plans to roll out the Disney Genie has yet to be revealed. We do know “this Fall”, so it’ll be here soon enough. Is Disney listening to the overwhelming dislikes and comments or are they pushing forward with a program that seems to have Disney fans on edge? We’re fairly certain there is no stopping this train now!