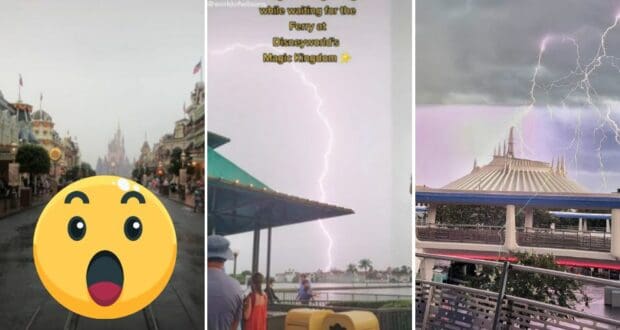 Located in the heart of Central Florida, Walt Disney World Resort is known for its intense storms, especially during the warm summer months. As Guests walk through a downpour at Magic Kingdom Park, video captures a terrifying lightning bolt… too close for comfort.

We’ve seen videos of the iconic Spaceship Earth being struck by lightning, as well as the Haunted Mansion taking a hit from lightning. Disney has even had to evacuate select attractions due to powerful storms.

So, when an especially treacherous weather weekend hits Florida, it’s almost to be expected. With plenty of flash flooding and lightning, Guests visiting the Parks should be quick to take cover.

But, some Guests walking down Main Street, U.S.A. at Magic Kingdom were surprised when a massive lightning bolt struck the popular Disney shop, the Emporium.

@allcentralflorida took to social media to share a TikTok video of the massive lightning bolt, noting, “When lightning hits the emporium.” Check out the video below:

But, that wasn’t the only video captured of this intense lightning storm. Another video was posted from Magic Kingdom Park.

@worldofwilsons captures what seems like a different bolt of lightning that takes place over what looks like Disney’s Grand Floridian Resort & Spa while waiting at Magic Kingdom Park for the Ferry transportation. Check out the video below:

As beautiful as Florida storms are, when capturing footage and photos of the lightning Guests should be sure to be safely undercover or head to one of the Disney attractions that operate during storms, such as Mickey’s PhilharMagic or Monster, Inc. Laugh Floor.

@scottacampbell was in Magic Kingdom during a storm on Friday, August 20, 2022, and captured some impressive photos all while narrowingly missing one bolt of lightning. He notes, “This was some insane storm over the Magic Kingdom today. Had one bolt strike right next to me as you can see if you zoom in on the first pic.”

Those photos and videos are stunning but scary too! We’re thankful all Guests seemed to be ok. If visiting Walt Disney World Resort, you can count on the rain. Here are a few Disney tips to prepare for the weather!

2022-08-22
Jamie Sylvester
Previous: ‘Cinderella’ Star Performs at Disney Parks For Global Princess Celebration
Next: These Disney Films Are Returning to Theatres for a Limited Time