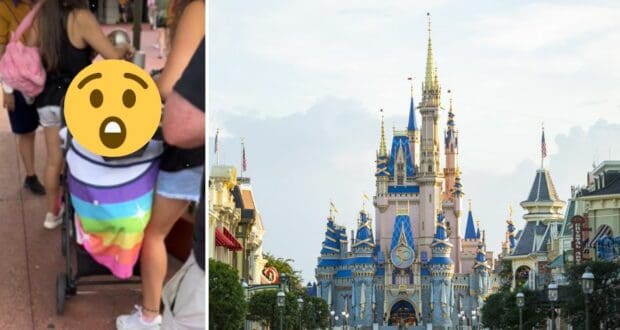 A video is going viral on social media of a family hiding their child in an infant stroller as they enter a Disney Park to seemingly avoid buying a ticket.

It’s no secret that Walt Disney World Resort and Disneyland Resort ticket prices have climbed. With the price of tickets, the upcharge of Disney Genie+, individual Lightning Lanes, and the cost of Disney Park food and merchandise… looking for ways to save money is ideal.

But, would you go to the extreme of hiding a child in a stroller to avoid buying a Park ticket?

@myfrienditsmebarbie took to social media to share a TikTok video, noting, “Poor kid was in an infant car seat.” In the video, you can see two women scanning their tickets to gain access to a Magic Kingdom Park with a child in the stroller. A Cast Member takes a second look at the stroller, but the family continues on.

The video cuts to Main Street, U.S.A., when the family pulls the young child out of the tiny infant stroller. While children under the age of 3 are free when entering the Parks, the child looks like she is at least 3 or older when pulled from her hiding spot in the stroller.

One comment on the video notes, “we payed for our tickets and witnessed the funniest thing we had ever seen & so we decided to share it so you can laugh too.” While some are in support of the video being shared to expose the family, others support the action such as one comment states, “All the negative comments on here clearly don’t have kids age 3-5 that are not tall enough for most rides.. good job! We did this too til about 5.”

Should the Cast Member have stopped the family with that double-take moment? One of the video comments adds, “Worked the front gates, trust me we know. We are told to just let it go.”

Purchasing tickets to a Disney theme park does get expensive for a family, but scenarios like this can get Guests removed from the Parks, or worse, banned for their actions.

2022-09-20
Jamie Sylvester
Previous: Disney Has Finally Removed COVID-19 Messaging From Most of Its Websites
Next: NEW ‘Princess and the Frog’ Experience Just Arrived at This Disney Park