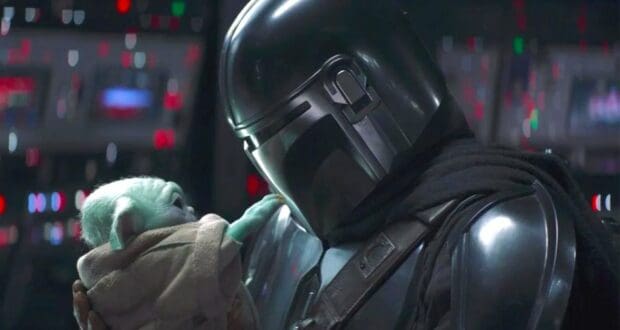 BIG NEWS coming from Disney+! The Star Wars series we all know and love has just dropped its Season 3 trailer, and we simply can’t wait to see it. That’s right… we’re talking about the ever-so-popular The Mandalorian, of course!

The Walt Disney Company’s streaming service, Disney+, has Disney fans overwhelmed as news of what’s to come to the streaming service is dropping left and right during the 2022 D23 Expo in Anaheim, California. With Disney Tips writers at the convention, we’re keeping you updated on the latest Disney+ news… which includes the epic series, The Mandalorian.

We’ve heard about Disney+ news, such as the upcoming Disenchanted, Hocus Pocus 2, and Willow, as well as another series from the Star Wars universe, the Lucasfilm’s Andor series. But, now, all eyes are on the brand new season 3 trailer for The Mandalorian.

@DisneyD23 took to social media to post the new trailer along with, “You are a Mandalorian no more.” The new season of #TheMandalorian starts streaming in 2023 on @DisneyPlus.”

Check out the trailer below:

RELATED: “This Is The Way” – The Mandalorian Arrives at Build-A-Bear Workshop

The almost two-minute trailer shows both the Mandalorian, along with Grogu (also known as “Baby Yoda” or “The Child.”) It looks like there will be plenty of epic battle scenes, intense twists and turns to the story, and of course, all the usual cuteness Grogu has to offer.

RELATED: Grogu (aka “Baby Yoda”) Dances Along with ‘The Mandalorian’ Director Guitar Session

The Mandalorian Season 3 is scheduled to begin streaming in 2023.

We will be sure to update Disney Tips readers as we learn more about the exciting new series, including as soon as Disney reveals an official release date for The Mandalorian, Season 3 on Disney+.

2022-09-10
Jamie Sylvester
Previous: New Details Finally Revealed Ahead of Disney’s November 2022 Theatrical Release
Next: Could Disney Be Getting Ready to Replace This Iconic EPCOT Attraction?