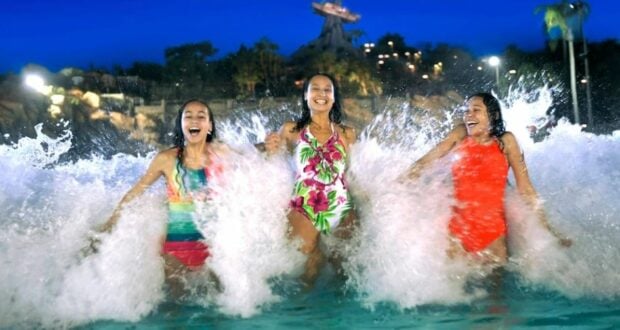 Great ready for a summer like no other! Time to make those Walt Disney World Resort summer plans, and this after-hours party is one you don’t want to miss.

As we await word on if Magic Kingdom’s Disney After Hours Boo Bash and Disney Very Merriest After Hours special events will make a return for 2022, we’re focusing on the summer at Walt Disney World Resort.

We’re suspect the highly-anticipated Guardians of the Galaxy: Cosmic Rewind rollercoaster at EPCOT will be opening to Guests Memorial Day Weekend. We also know that Hoop-Dee-Doo Musical Revue at Disney’s Fort Wilderness is returning this summer. Plus, we’re eagerly awaiting word on when Fantasmic! at Disney’s Hollywood Studios and Finding Nemo: The Big Blue… and Beyond will open at Disney’s Animal Kingdom.

With the busy summer ahead, it’s time to plan an evening like no other at Disney’s Typhoon Lagoon Water Park! We previously shared the big news that Disney H2O Glow After Hours at Typhoon Lagoon is making a comeback. While the event looks a little different (RIP Toy Story and Partysaurus Rex), the 3-hours special ticketed event has us ready to party the night away.

Disney has announced the H2O Glow After Hours with, “Attend a Dazzling Glow Party with Lively Entertainment, Tasty Snacks and Some Favorite Attractions—with Lower Wait Times!”

The Disney H2O Glow Night takes place every Saturday night between 8-11 pm from Memorial Day Weekend (May 28) to August 27, 2022. Once the Water Park closes, the GLOW night fun begins! Even though the party begins at 8 pm, Guests with the H2O Glow tickets will be allowed to enter Typhoon Lagoon as early as 6 pm.

The event highlights include:

While ice cream novelties, popcorn, and select bottled beverages are all included in the ticket cost, Guests will also have a chance to purchase other specialty food and beverage items available.

Pricing for the H20 Glow After Hours event is $75 plus tax for adults (ages 10 and up). Children (ages 3 to 9) are $70 plus tax. Passholders and Disney Vacation Club Members can purchase specially priced tickets for $59 per adult or $54 per child.

Tickets are now on sale for the general public for Disney H2O Glow After Hours! Snag your tickets here. Happy planning your summer Disney experience!