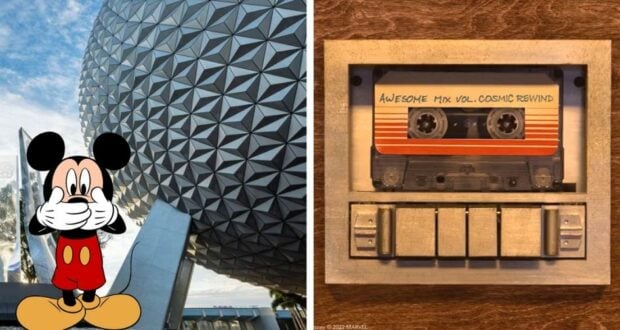 Hang on Disney fans… it’s been a roller-coaster journey over at EPCOT, and Disney just keeps messing with our emotions!

It’s no secret that EPCOT is a hot spot for transformation. With the Disney Park’s construction overhaul from the former Future World to the now four neighborhoods, we’ve been sitting on the edge of our seats awaiting news of grand openings.

We’ve also seen the arrival of newbies (and old favorites) such as Space 220 Restaurant in World Discovery, along with Creations Shop and Club Cool in World Celebration.

Disney dropped the new menu at Connections Cafe and Eatery coming “Spring 2022” and the never-ending construction wall makes us eager to learn more about the Journey of Water Inspired by Moana in World Nature.

Of course, the BIG – big news we want to hear is WHEN is EPCOT’s new rollercoaster opening? It wasn’t too long ago when a Disney Executive accidentally leaked on social media that Guardians of the Galaxy: Cosmic Rewind would be opening Memorial Day Weekend.

The leaked information was quickly taken down, but the internet never forgets anything! Now, on April Fools of all days, Disney is teasing an announcement that is coming soon for Guardians of the Galaxy: Cosmic Rewind.

Disney Parks took to Twitter with a tease video noted with “TRANSMISSION INCOMING – YADNOM.” Curious what “YADON” is? It’s Monday spelled backward. Check out the video below:

If you haven’t seen Guardians of the Galaxy (2014), you need to know that the video above is of the Star-Lord’s (AKA Peter Quill’s) mixed tape which is one of his prized possessions.

This tease has us eager for Monday! Thus far we have seen the recent release of photos inside the new attraction queue, along with what we can expect from this family-friendly attraction’s height requirements, and how we should prepare to check out the specialty gift shop.

Begin your adventure by touring the Galaxarium—a planetarium-like exhibition showcasing the similarities and differences between Xandar and Earth’s galaxies. You’ll even get to discover some of the incredible wonders of Xandar and learn about their technology.

This family-friendly attraction features the first ever reverse-launch on a Disney coaster and is one of the longest enclosed coasters in the world! A new innovation from Walt Disney Imagineering—this coaster rotates 360 degrees so you can focus on the action!

What announcement could be coming on Monday (April 4, 2022)? We’ll be sure to share the Guardians of the Galaxy: Cosmic Rewind coaster news as soon as Disney releases it!