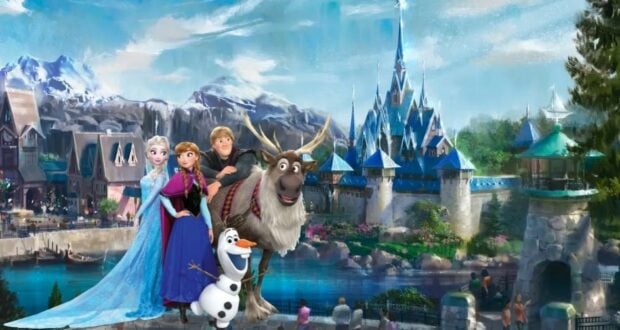 It’s an exciting time to be a Disney fan! With one project after another, we’re thrilled to see Disney’s Frozen Land is making progress.

Even though Disney’s new animated film, Encanto (2021) has given the Frozen (2013) film franchise a run for its money, Frozen is still a Disney fan favorite that isn’t going anywhere anytime soon!

At Walt Disney World Resort, we’ve seen the addition of the Frozen Ever After attraction at EPCOT (RIP Maelstrom) and “For the First Time in Forever: A Frozen Sing-Along Celebration” at Disney’s Hollywood Studios. Plus, Anna, Elsa, and Olaf are available for meet and greets at select Disney Parks.

When it comes to all things Frozen, we simply can’t seem to “Let It Go“! So, of course, a Frozen-themed Land is a brilliant Disney Park idea. Let’s head on over to Disneyland Paris where progress on the highly-anticipated Frozen-themed land is full steam ahead!

Disneyland Paris is currently in the midst of its 30th Anniversary celebration with special experiences for Disney Park Guests. The Disney Park’s transformation, including the expansion of Walt Disney Studios Park, has been impressive, to say the least.

First up, let’s talk about “The Kingdom of Arendelle”. Frozen comes to life as Disney Imagineers prepare to transform Guests to the stunning land of Arendelle that the Frozen sisters call home.

Disney provides a rundown on what to expect from this new land:

“When you arrive at the heart of the Park, you’ll be immersed in the same wintery atmosphere experienced during the movies. Elsa’s Ice Castle, which will stand at the top of a 131-foot-high snow-covered mountain, can be admired from afar. Many new experiences await you in this magical land including a new attraction that will take Guests on a journey accompanied by the iconic “Frozen” characters.“

“The village — with its Norwegian-inspired architectural style — will be home to both a shop and a restaurant that will serve meals with a Nordic touch.“

“Additionally, Guests will have the opportunity to meet their favorite characters during a royal meet and greet.“

In other words, Frozen fans… it’s time to start planning a vacation to Paris!

Of course, Disneyland Paris isn’t only preparing the Frozen Land. They will also be introducing a “Picturesque Promenade” which is a stunning walkway with themed gardens that Guests can gain access to the Kingdom of Arendelle.

The promenade will serve as a transition to the new theme-based areas that will surround the future lake, completely transforming the Park’s current atmosphere.

Plus! A new table-service restaurant is in the works! That’s right, Disneyland Paris has announced:

“If you’re feeling hungry, a stylish table-service restaurant with an Art Nouveau design will serve as the perfect place to refuel. With spectacular panoramic views of the lake and special meet-and-greet opportunities with a selection of fan-favorite Disney characters, this restaurant will offer fun and relaxation for the whole family.”

Disneyland Paris has yet to reveal the official opening date of the Frozen-themed land, Picturesque Promenade, and its new table-service restaurant. We are keeping our fingers crossed the initial 2023 plans are still a go!