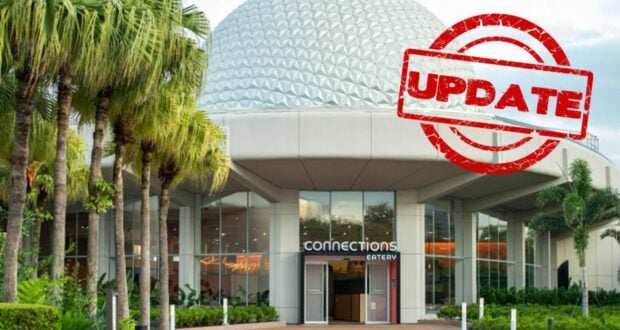 A visit to Walt Disney World Resort is never complete without a day at EPCOT. The Disney Park is currently undergoing a massive overhaul as it welcomes its four neighborhoods, including World Celebration, World Discovery, World Nature, and World Showcase. But, as Disney introduces new experiences, they are quick to catch on when change is needed.

Connections Eatery is the newest EPCOT restaurant located in World Celebration (former Future World area) near Spaceship Earth. The quick-service restaurant opened in April 2022, along with its neighboring Connections Café (AKA Starbucks).

The restaurant is known for its open, welcoming atmosphere Walt Disney Imagineering worked to create a bright space with nods to Walt’s mapped-out plan for EPCOT on the ground. With a basic but fairly good quick-service style menu it’s an easy go-to pick during a Disney Park day. One of the regularly purchased items is pizza.

If you’re looking for delicious pizza at EPCOT, you should head to Via Napoli in the World Showcase. If a table-service restaurant isn’t what you prefer, however, Connections Eatery’s pizza would do… but it was definitely lacking in taste.

It seems like Disney has been quick to adjust!

According to @bioreconstruct on September 3, 2022, “Pizza has changed at Connections Eatery. Delicious thin crust with cornmeal dusting underneath. $11 and equivalent size of Louie’s at Universal.”

@bioreconstruct further notes that the pizza is “Much better! The previous pizza here was tiny” along with “It was delicious!”

We, too, are thankful for the change! The current Connections Eatery menu consists of three types of pizza, including meatball pizza, pepperoni pizza, and five-cheese pizza. For around $11.00, Guests can have two slices.

Disney describes Connections Eatery as, “A Sensational Meal: At Connections Eatery, we invite you to savor delicious dishes with family, friends and everyone in between––you can even catch a glimpse of the chefs as they work their magic. Take your taste buds on a tour around the world with dishes inspired by Italian, French and Asian cuisines.”

This isn’t the first time we’ve seen quick menu adjustments. It wasn’t too long ago that EPCOT’s new (and very popular!) Space 220 Restaurant in World Discovery made a few menu adjustments.

As always, be sure to check the My Disney Experience App for a quick way to see the most current theme park menus and dining reservations available at Walt Disney World Resort. Happy dining, Disney fans!

2022-09-05
Jamie Sylvester
Previous: The Secret Place to Make Your Own Disney Popcorn
Next: Disney World 50th Anniversary Experiences You Must Try Before the Celebration Ends