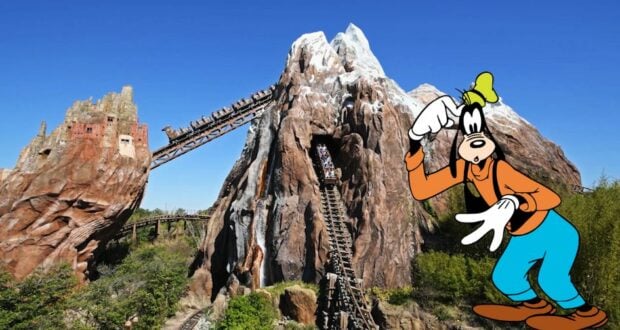 Hurricane Ian left a significant impact on Florida as it tore through the Sunshine State at the end of September 2022. Walt Disney World Resort closed its Park gates as the storm drifted through Orlando. While damage was reported at Universal Orland Resort and surrounding areas, despite some flooding Disney’s damage seemed minimal… except for one Disney Park “ritual behavior” disappearing.

Time to brave the Yeti! One of the most popular attractions in all of Walt Disney World is the ominous and iconic Mount Everest roller coaster that looms over Disney’s Animal Kingdom Park. Expedition Everest – Legends of the Forbidden Mountain is a thrilling adventure through the icy Himalayan peaks on a speeding train while avoiding the clutches of the mythic Yeti.

Once you reach the mountain top, Guests will see the Yeti has broken the track! The train stops for a moment as Guests take in the stunning yet terrifying views. But have you ever noticed the thousands of hair ties thrown on the top of the mountain?

Former Disney Imagineer Joe Rohde once addressed the hair ties noting, “More ritual behavior. The hair scrunchies! The hair tie thing at the top of Everest is Weird but also ritualistic. It violates the illusion of the scene, but it oddly parallels what people do at the top of a real Himalayan pass…which is to leave a rock.”

Sadly, when Hurricane Ian swept through Central Florida, it may not have caused damage to Expedition Everest, but it did make this Disney Park Guest ritual disappear.

@brooke_stephens7 took to social media to share, “The hurricane took all the hair ties from the top of Mount Everest… time to start a new era.” Check out the video below:

Challenge accepted! Will Disney Park Guests keep this Expedition Everest ritual going, or did Hurricane Ian make it disappear? Only time will tell!

2022-10-05
Jamie Sylvester
Previous: The NEW Eats You Have to Try at This Favorite Disney Resort
Next: Final Goodbyes to EPCOT’s Iconic Future World