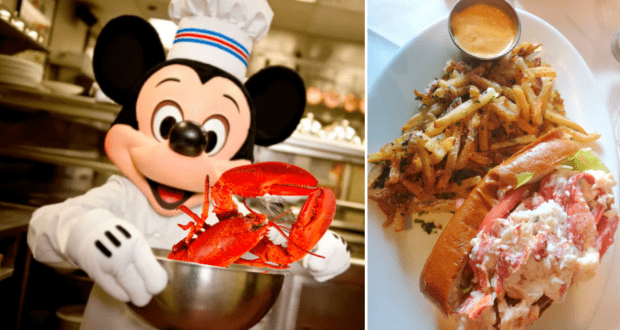 A New Englander’s Guide to Lobster at Walt Disney World

Walt Disney World has quite the foodie scene, and the parks and resorts have really been upping their seafood game in recent years. While there is no shortage of lobster dishes at my local restaurants, there are plenty of locations around Walt Disney World that either put unique spins on this tasty shellfish or would make excellent entrees for lobster newbies to try.

As a lifelong New Englander, these are the must-eat lobster dishes around the Walt Disney World Resort. Let’s jump into it! 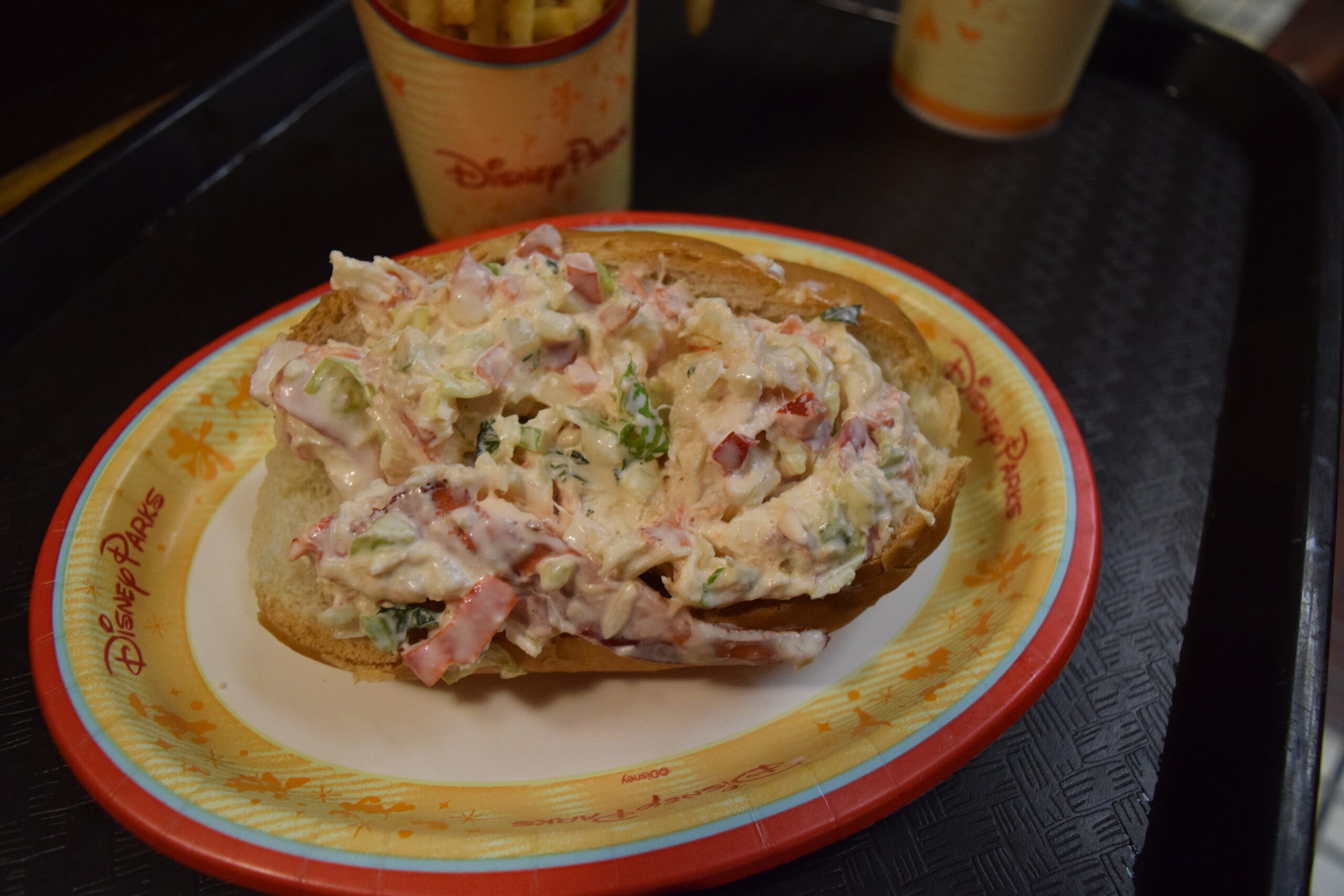 Fresh lobster meat from a theme park quick-service restaurant is not something to expect by any means, and while  Columbia Harbour House is beloved by Guests, this Magic Kingdom quick-service restaurant is not the top choice for lobster at Walt Disney World. This roll has quite a lot of mayonnaise and certainly uses frozen lobster meat making it one of the least favorable options, but for $17, it is definitely a steal!

Try it if you are not from a part of the country where this is something easy to find, but do so knowing there are better lobster rolls at Disney World. 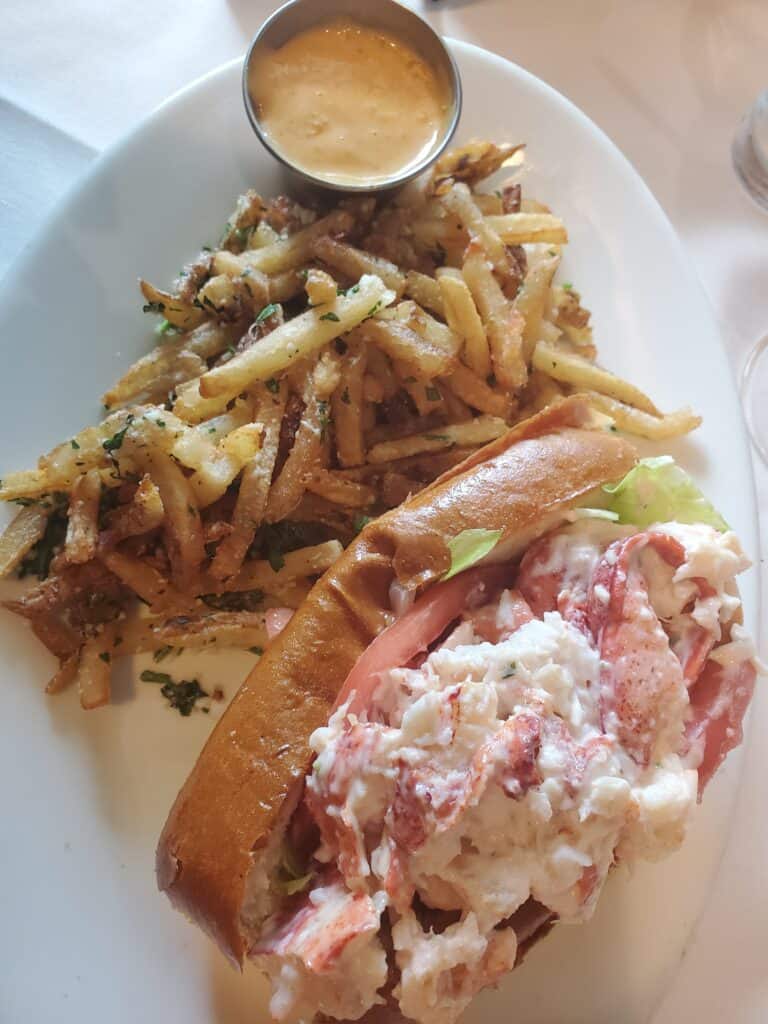 If you are looking for what just might be the best lobster roll at Walt Disney World, you need to head to The BOATHOUSE in Disney Springs. This nautical waterfront restaurant is reminiscent of New England, not only in terms of decor and theming but with all of the fresh and delicious seafood dishes on the menu.

This lobster roll comes with lettuce and tomato, and tomato is an unusual topping for a lobster roll here in New England, but it was actually delicious. If you want to be traditional, though, order yours without it. You can also order a Connecticut Style lobster roll here, which would come served warm with butter as opposed to New England Style which is chilled with mayo. 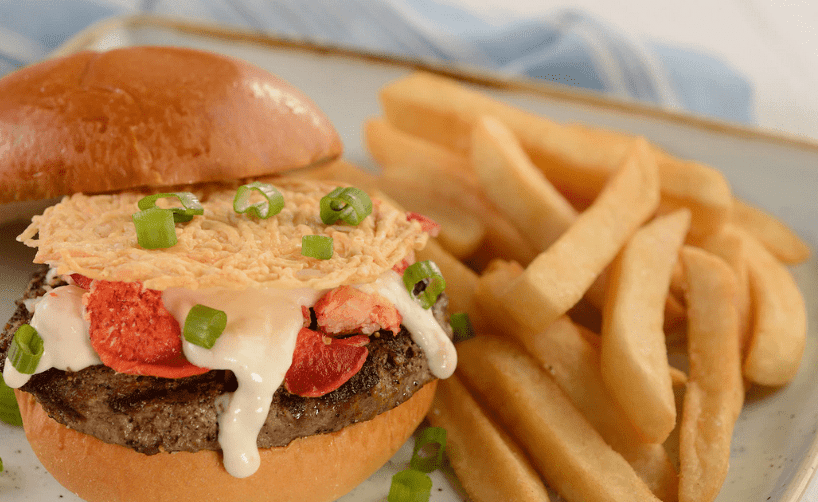 For a twist on a traditional burger, the Grand Floridian Cafe at Disney’s Grand Floridian Resort and Spa offers their popular Lobster Thermidor Burger. The burger is made with an artisanal patty topped with lobster meat in a lobster-parmesan Thermidor sauce, and it’s quite delicious!

This dish has been on the menu at the restaurant for years as it continues to be popular with Guests, and it’s available nearly all day from brunch through dinner. 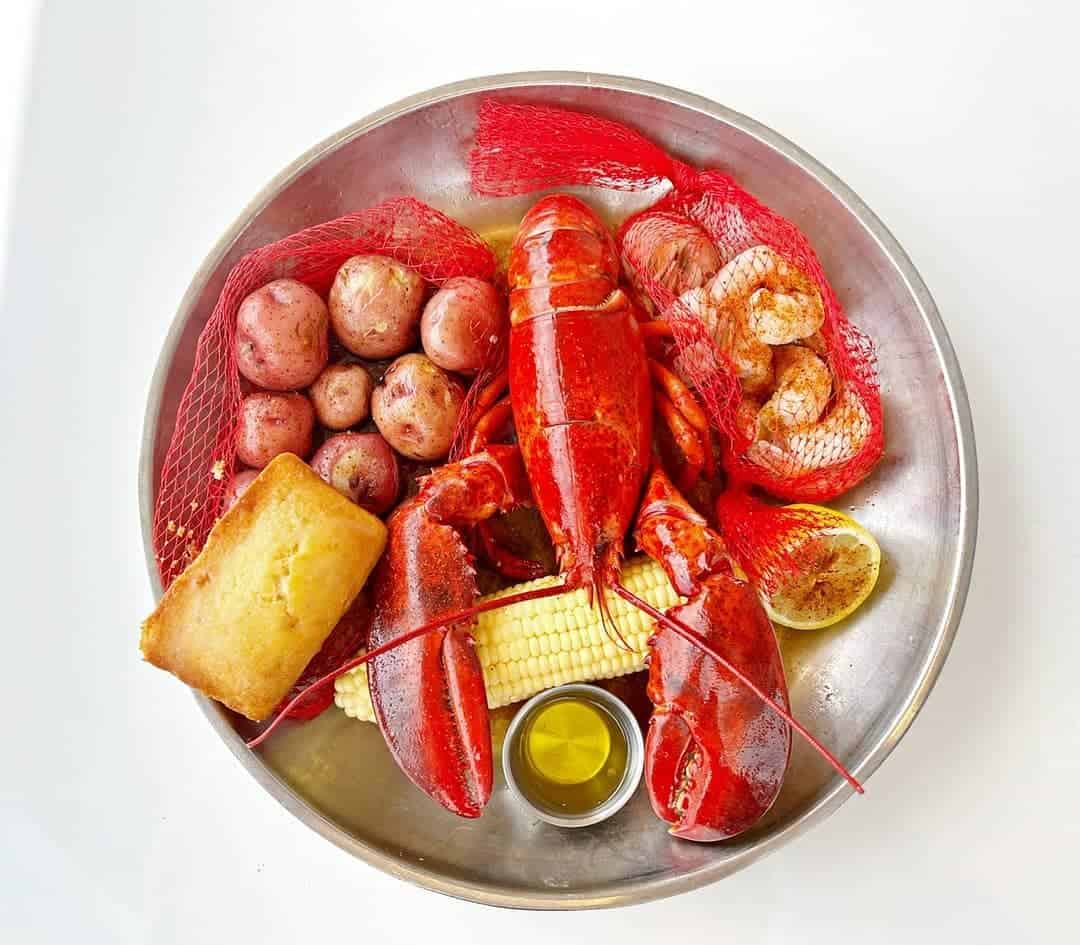 Whole Maine lobsters have become rather uncommon at Walt Disney World these days, but one restaurant that is still serving this iconic New England dish is Paddlefish in Disney Springs.

The restaurant’s whole Maine lobster served with corn and potatoes is currently priced at $70, which is actually not a horrible deal given the high market price for lobster and the locale of dining on the docked steamboat at Disney Springs. Paddlefish serves up a pretty solid lobster roll, too! 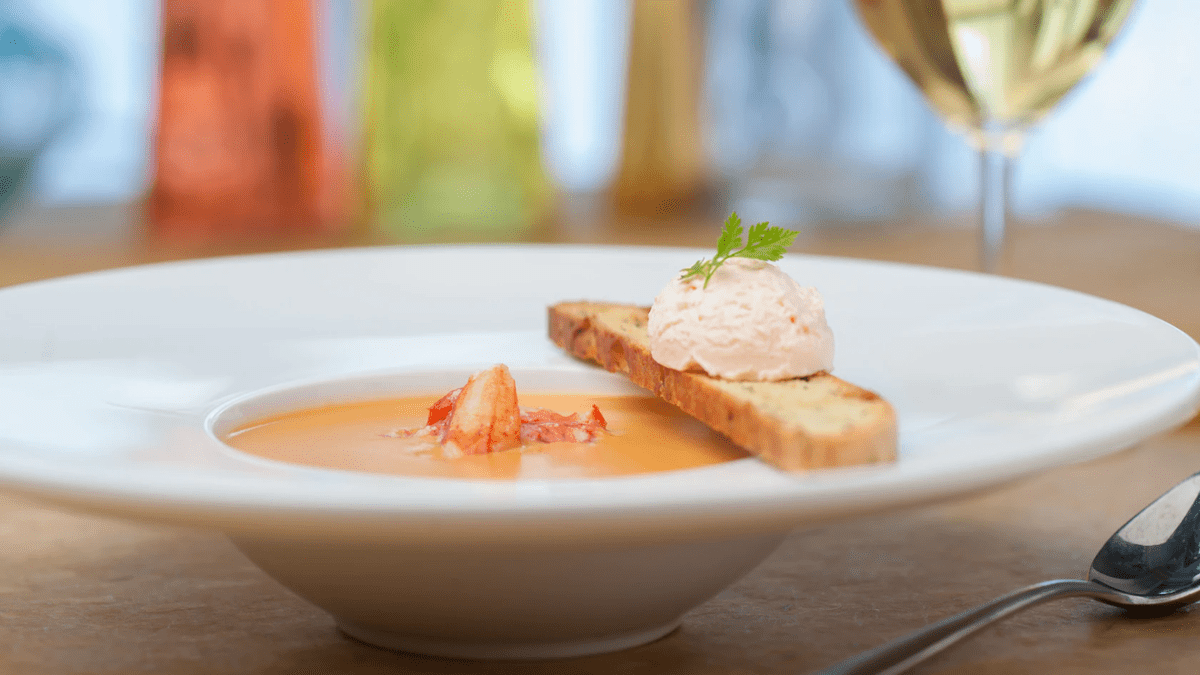 In the past, Guests at Disney’s Yacht Club Resort could find whole Maine lobsters at Ale and Compass, but recently this savory sea bug has only been spotted on the menu at The Yachtsman Steakhouse.

The Yachtsman Steakhouse is a signature dining experience, perfect for celebrating special occasions and date nights. And, you can make the occasion even more special by adding a half lobster enhancement to your entree or enjoying some lobster cocktail as part of a seafood tower.

While it’s known primarily for its steaks, The Yachtsman Steakhouse also serves one of the best lobster bisques at Walt Disney World. 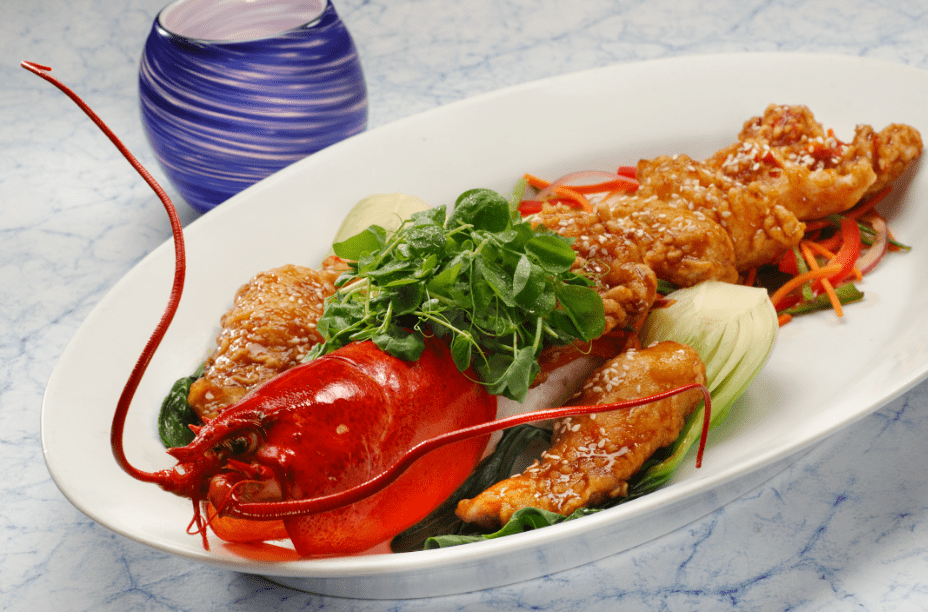 One of the most under-the-radar Disney lobster dishes can be found among the 18 restaurants located at the Walt Disney World Swan and Dolphin Resort. Todd English’s bluezoo features an eclectic menu with something for everyone, including the Lobster Bucatini. 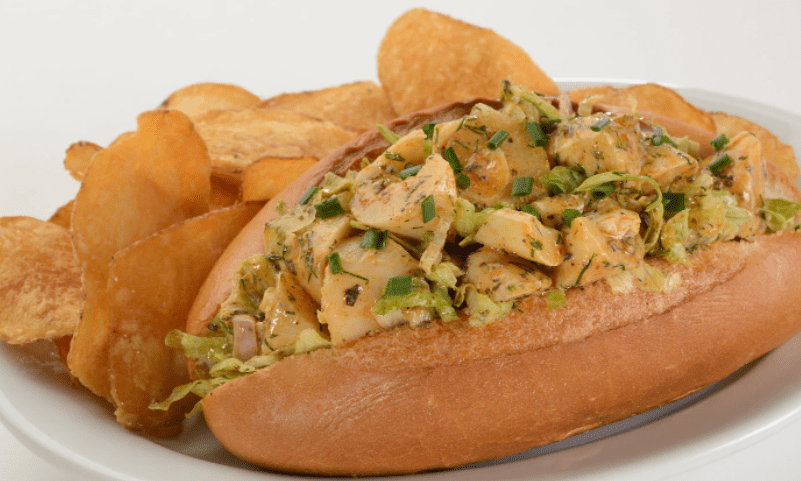 This is not an actual lobster dish as it’s entirely plant-based, but it is a creative take on a classic dish that is actually quite delicious. This roll is filled with “Marinated Hearts of Palm, Celery, Sweet Apples, and Creamy Old Bay Dressing served with House-made Crispy Potato Chips.”

Plant-based eaters probably are not reading this post, but if you ever find yourself looking for something meatless in Disney’s Hollywood Studios, this sounds like a delicious option!

With so many different lobster dishes to try at Walt Disney World, you really can’t go wrong with whichever ones you try. As you plan where to dine during your next Disney vacation, be sure to make advanced reservations for table service restaurants, and enjoy!