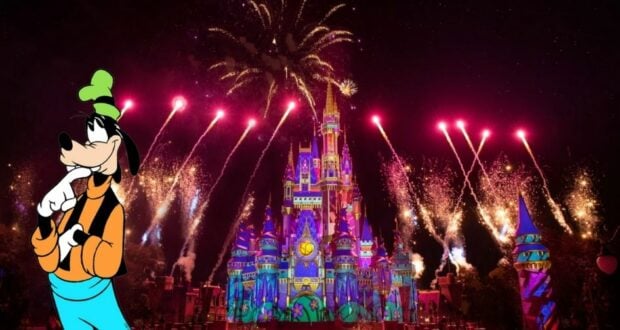 Staying in the Magic Kingdom area on April 7, 2022? Take note that Disney has announced fireworks testing will be performed.

Walt Disney World Resort is welcoming Disney fans from all over to its 50th Anniversary Celebration called “The World’s Most Magical Celebration”. The celebration began on October 1, 2021, and will continue for a full 18-months. That’s a long party!

For its 50th Anniversary, Disney has rolled out two new nighttime spectaculars including “Disney Enchantment” at Magic Kingdom Park and “Harmonious” at EPCOT.

We are still eagerly awaiting the return of a fireworks spectacular at Disney’s Hollywood Studios as Disney has yet to make mention of the pre-COVID nighttime show, “Star Wars: A Galactic Spectacular“. Disney has however stated that Fantasmic! would be making a return but the opening date is still unknown.

And while Disney’s Animal Kingdom is unable to offer fireworks due to the animals, they do have Tree of Life Awakenings. We’re still keeping our fingers crossed that Disney introduces a drone show to Animal Kingdom Park, just like the current show at Disneyland Paris.

Then, of course, all four Disney Parks’ icons (Cinderella Castle, Spaceship Earth, Tower of Terror, and Tree of Life) are currently considered “Beacons of Magic” which glow with stunning projections and music at select times in the evenings.

Now, when Disney announces fireworks testing, it piques our interest as we can’t help but wonder what is going on behind the scenes!

Walt Disney World Cast and Community announced, “We will be conducting some routine fireworks testing around Magic Kingdom Park this Thursday night, April 7, between 11 p.m. and midnight. We will do our best to keep noise at a minimum and apologize to our neighbors and Guests for this late-night inconvenience.”

Disney Enchantment is still on the schedule to be performed tonight at 9:00 pm.

If staying at one of Disney’s Magic Kingdom Resorts including Disney’s Bay Lake Tower, Disney’s Contemporary Resort, Disney’s Polynesian Village Resort, and Disney’s Grand Floridian Resort & Spa, it looks like you’ll have an opportunity to experience an extra dose of fireworks!

We aren’t sure what this “routine maintenance” show will look like. Recently, the top of the Under the Sea – Journey of the Little Mermaid attraction caught fire at Magic Kingdom due to the fireworks but was quickly put out.

And deep down in our hearts, we can’t help but dream Disney is thinking of a return of former beloved fireworks shows such as Wishes or Happily Ever After. Of course, this is just a wish upon a star and nothing more!

If you’re in the Magic Kingdom area between 11:00 pm and midnight tonight, enjoy the fireworks testing from outside of the Park.