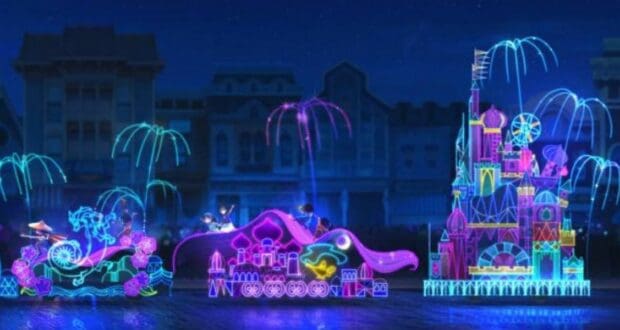 Hugs with Mickey Mouse are returning, parking trams are back, and face masks are no more.

And to celebrate the 50th anniversary and return of the dazzling Main Street Electrical Parade, Disney has today, April 7, revealed a brand-new dining package and collection of merchandise to honor the classic nighttime parade!

The original parade debuted at Disneyland in California back in 1972 and ran until 1996, while Disney California Adventure Park hosted the parade between 2001 and 2010. The Magic Kingdom Park at the Walt Disney World Resort saw its Main Street Electrical Parade run between 1977 and 2016, with the parade inspiring numerous versions in Disney Parks around the world, including the Tokyo Disneyland Electrical Parade: DreamLights and Hong Kong Disneyland’s  Paint the Night Parade.

And as part of its grand return, new characters, and big anniversary, Disney has launched new merchandise for Guests to wear as they welcome back this beloved Disney experience. The patterns are bold and colorful, and sure to excite any Disney Park fans of the classic Disney parade. 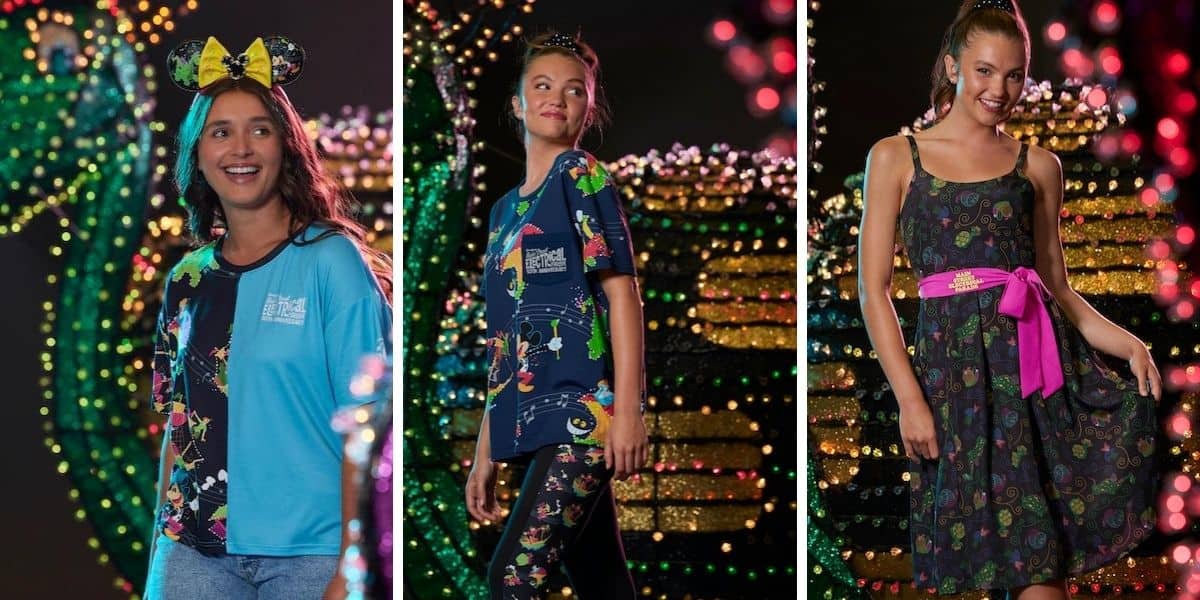 There’s even a glow-in-the-dark dress that features Pete’s dragon Elliott and is complemented by a sash that honors the 50th anniversary of Disney’s timeless nighttime show.

And like any new Disney merchandise collection, Disney has released a Main Street Electrical Parade mini backpack by Loungefly to celebrate the return of the parade, featuring iconic floats and sights from the electrifying parade. And that’s not all! At Plaza Inn in Disneyland Park, Disney has introduced a new dining package that comes with a meal, beverage, dessert, and entrance to a reserved viewing area for the Main Street Electrical Parade:

“Experiencing the thousands of sparkling lights and musical sounds as the floats go by will be even sweeter after enjoying some world-famous Plaza Inn fried chicken, house-made mac and cheese, Mickey-shaped sweet honey cornbread, and a decadent berry cheesecake. Reservations for the “Main Street Electrical Parade” dining package will open no earlier than April 14.”

Disney Parks Blog mentions that “this electrifying new merchandise is coming soon to Disneyland Resort and shopDisney, so stay tuned! There’s even more excitement on the way soon, including a nighttime spectacular foodie guide, so check back to the Disney Parks Blog”.

On May 28, Guests will also finally get to see Fantasmic! return to the Disneyland Resort with all-new characters and magical additions. Those waiting for Fantasmic! to return to Disney’s Hollywood Studios at Walt Disney World still have no confirmed date as yet, but we know it is expected summer 2022. Although entertainment is getting closer to returning to normal, big Disneyland shows like Frozen – Live at the Hyperion have still not returned to the daytime entertainment schedule

With just about two weeks to go before all these nighttime shows make their trumphant return, we can’t wait “ignite the night” once again!