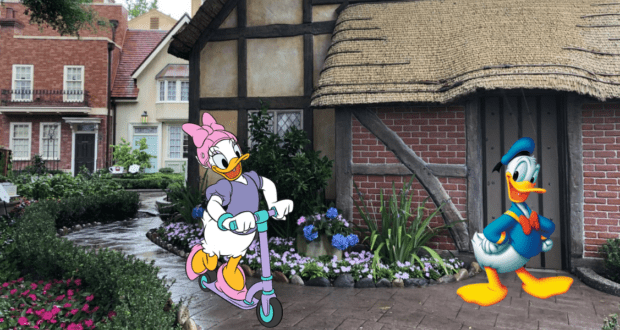 The EPCOT Early Entry Trick You May Never Have Heard Of

Experimental Prototype Community Of Tomorrow – the Disney theme park that we know as EPCOT. An original Park that Walt Disney himself planned on being part of Walt Disney World, but in the form of a community offering residential areas and an urban city center. Instead, it took the form of a theme park showcasing modern innovation, whilst celebrating world nations.

You could say that EPCOT is two contrasting theme parks in one: World Showcase; and what was previously known as Future World. 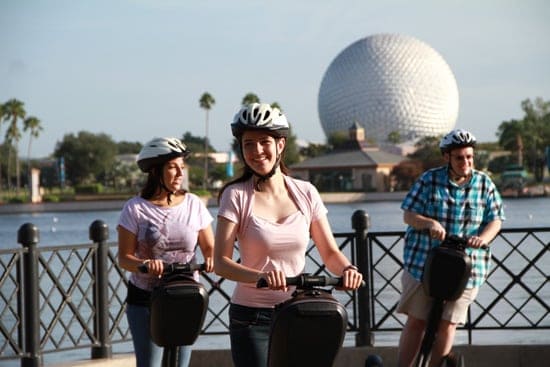 Segway was a mode of transportation that was unfortunately only offered around World Showcase for a relatively short period of time. Offered from September 17, 2012 to February 2013, Guests could take part in a paid experience known as the ‘Keep Moving Forward: See The World, Share The Dream Segway Tour’.

At a price of $99, plus tax, per person, the tour was open to Guests aged 16 years or older. At 3 hours long, the tour included an instructional session where Guests learned how to use a Segway; breakfast; and a tour of World Showcase. Guests also received an exclusive Disney pin, featuring the tour name on a moving wheel. Having been lucky enough to experience this tour, we can definitely say that it was worth the price tag paid to participate.

The tour was offered at several times each day that it ran, from 7:45 a.m. to 9:30 a.m. Guests met at Guest Relations, to the left of Spaceship Earth, where they were greeted by their tour guide. Each tour included around 8 Guests. Entering EPCOT at this time was an exclusive experience; it’s pretty special to be one of the only Guests in a Disney Park. At check-in, each Guest received an exclusive Disney Pin to remember their experience. 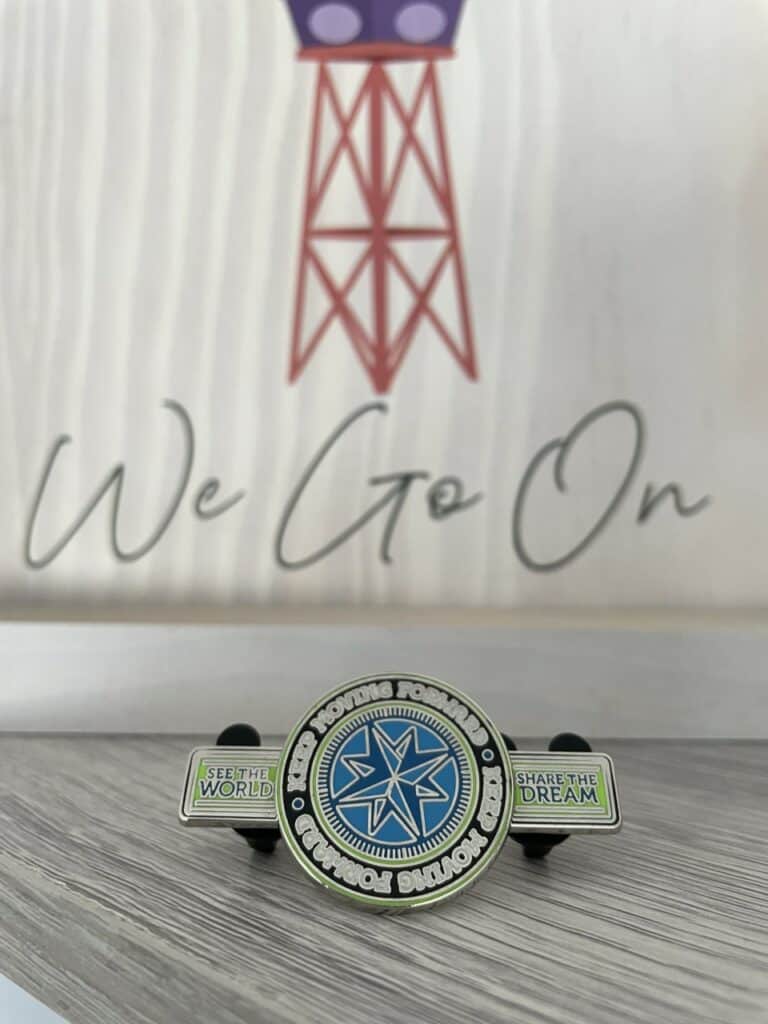 Following check-in, and once all Guests in the tour had arrived, the first stop was Innoventions for Segway training. Trainers assisted the tour guide to demonstrate the safe use of a Segway and introduce the main features of the Segways to Guests.

Guests were then invited to begin using the Segway, initially by stepping onto the Segway and gaining balance whilst staying around the same spot. The training then allowed Guests to build confidence moving forwards and backwards, turning, and moving up and down ramps. The final stage of training involved navigating around and between cones, and more difficult manoeuvres such as weaving in and out of a line of cones.

The training was a great way for Guests to get to know their new mode of transport, with lots of space. They had the opportunity to ask questions and take a break whenever they needed.

Once all Guests had ‘passed’ their Segway training, breakfast was served up in Sunshine Seasons. Complimentary to the tour, the breakfast was very much earned after 45 minutes of training!

Breakfast included an egg and cheese muffin, a small pot of fruit, and a yoghurt. Guests could help themselves to orange juice and coffee to enjoy with their breakfast. Breakfast was concluded with each Guest being given a headset that allowed them to listen to their Guide whilst exploring World Showcase. 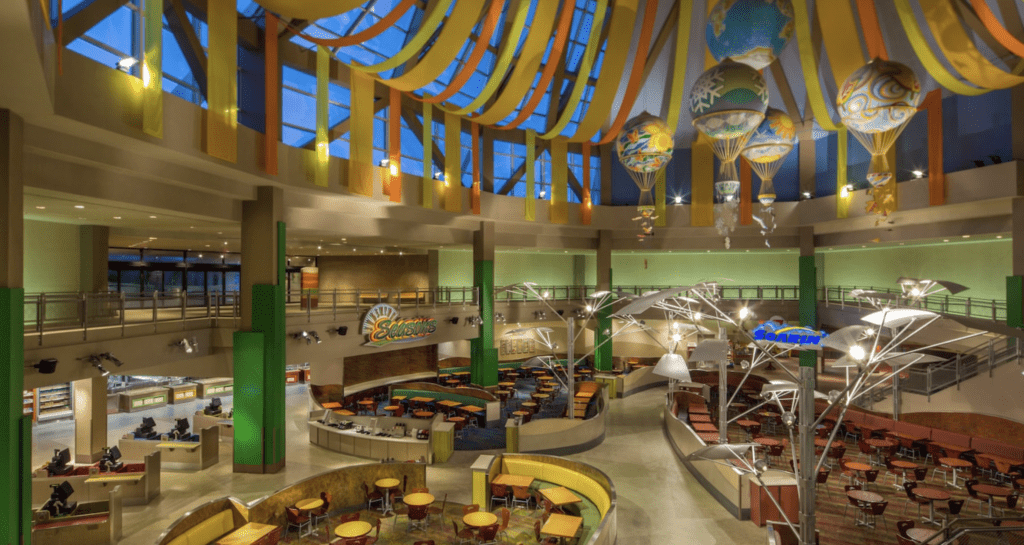 After breakfast came the part that all Guests had signed up for – Segway-ing around World Showcase. During this time, World Showcase didn’t open to Guests visiting the Disney Park until 11 a.m. This allowed Guests on the Segway Tour to experience World Showcase like never before – being the only Guests around except for Cast Members who were preparing for a day of magic ahead.

Guests collected their Segways from Innoventions and headed to World Showcase, passing the Fountain of Nations on the way. The Segway tour began at the Mexico Pavilion and traveled clockwise around World Showcase Lagoon to the Canada Pavilion. 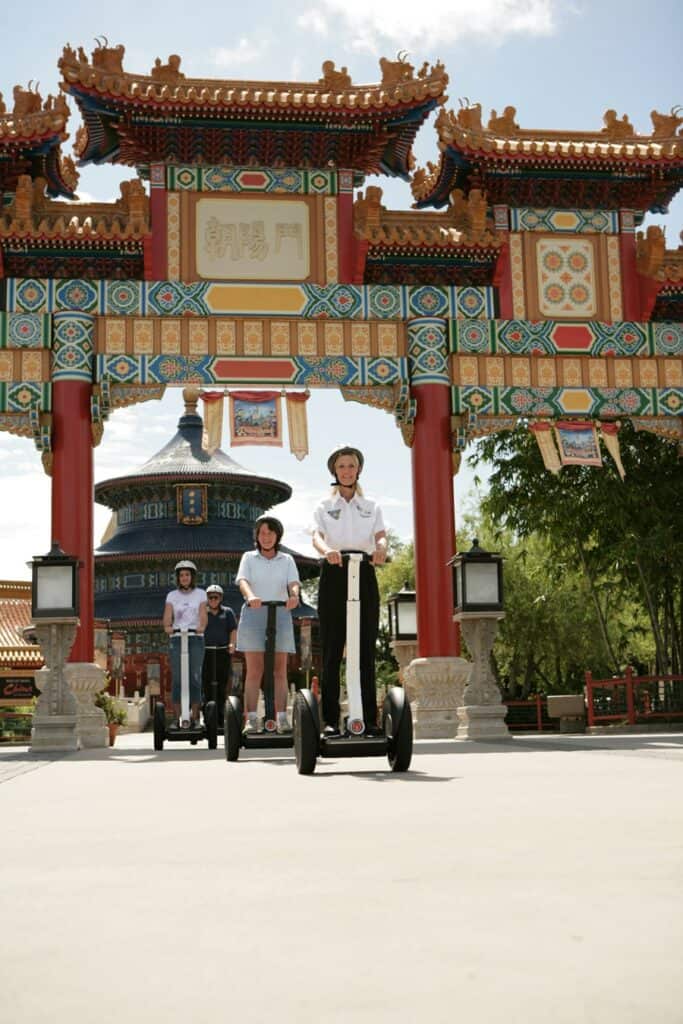 Guests had the opportunity to Segway around the external areas of each Pavilion, whilst their Guide shared neat facts and secrets about the countries of World Showcase. Different Pavilions presented different experiences and challenges on the Segway.

The China Pavilion offered a narrowing pathway and inclines that tested your navigation skills. Segway-ing along the walkway of the miniature railway in the Germany Pavilion provided a little extra challenge, encouraging you to travel at a slower speed. Morocco was a neat Pavilion to explore via Segway, following the streets inspired by a Fez and allowing you time to practice weaving around the Bazaar.

Exploring World Showcase at such an early time proved to be the perfect time to see a Disney Wedding in action. We were lucky enough to see a Disney bride and groom having their photos taken, following their wedding ceremony in the Italy Pavilion. The columns at the entrance of the Pavilion framed the petal-covered aisle perfectly.

Although this meant that we couldn’t Segway further into the Italy Pavilion, it didn’t matter. It’s not every day you get to attend a Disney Wedding, is it? Instead we were able to stop close to World Showcase Lagoon and watch the wedding activities from a distance, and also stop to get photos on our Segways. 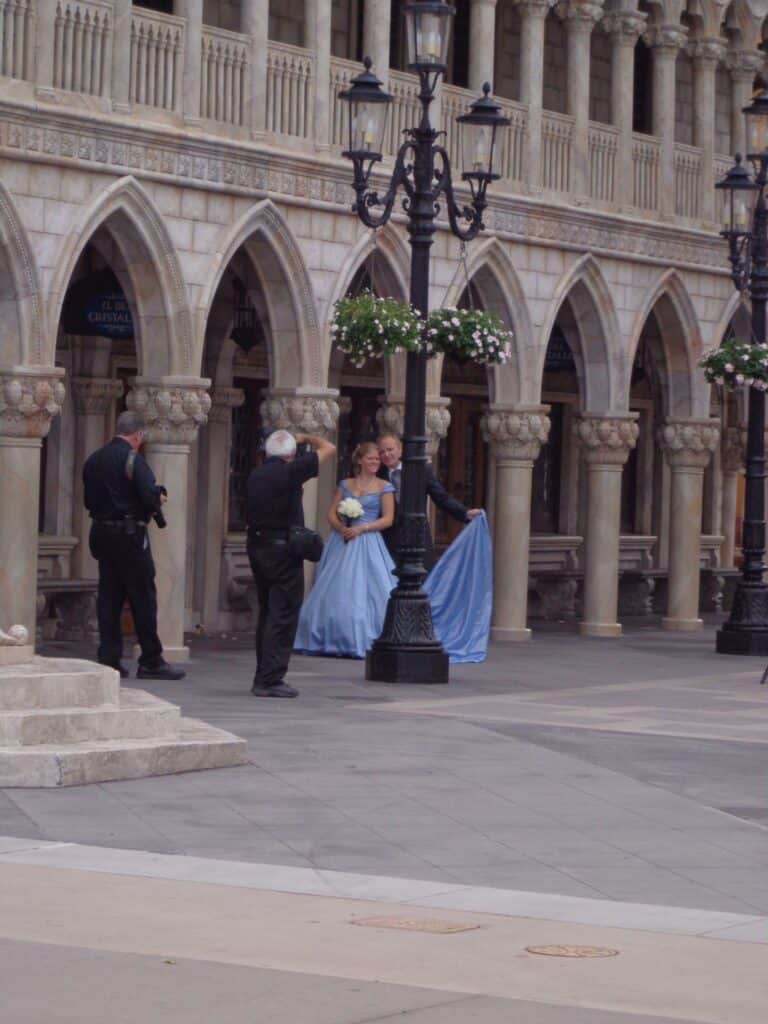 The Secrets of EPCOT World Showcase

Whilst exploring World Showcase on our Segways, the Guide shared secrets and facts about each EPCOT Pavilion that we passed by. Here are some of our favorite facts that we learnt whilst taking part in the ‘Keep Moving Forward: See The World, Share the Dream Segway Tour’. 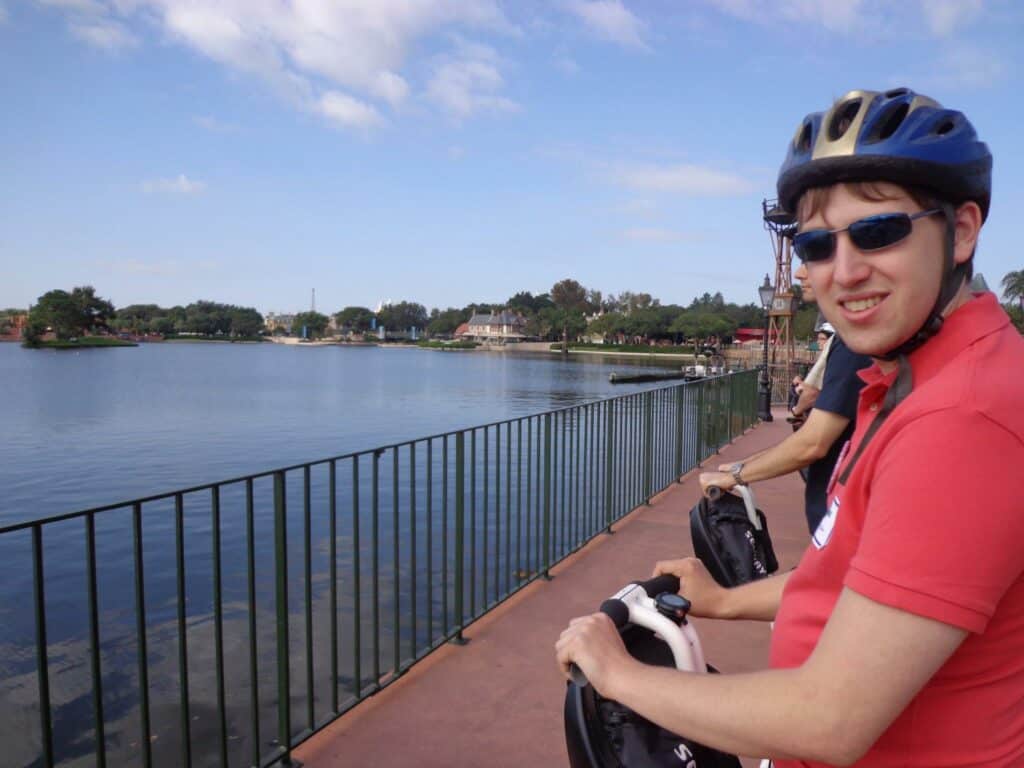 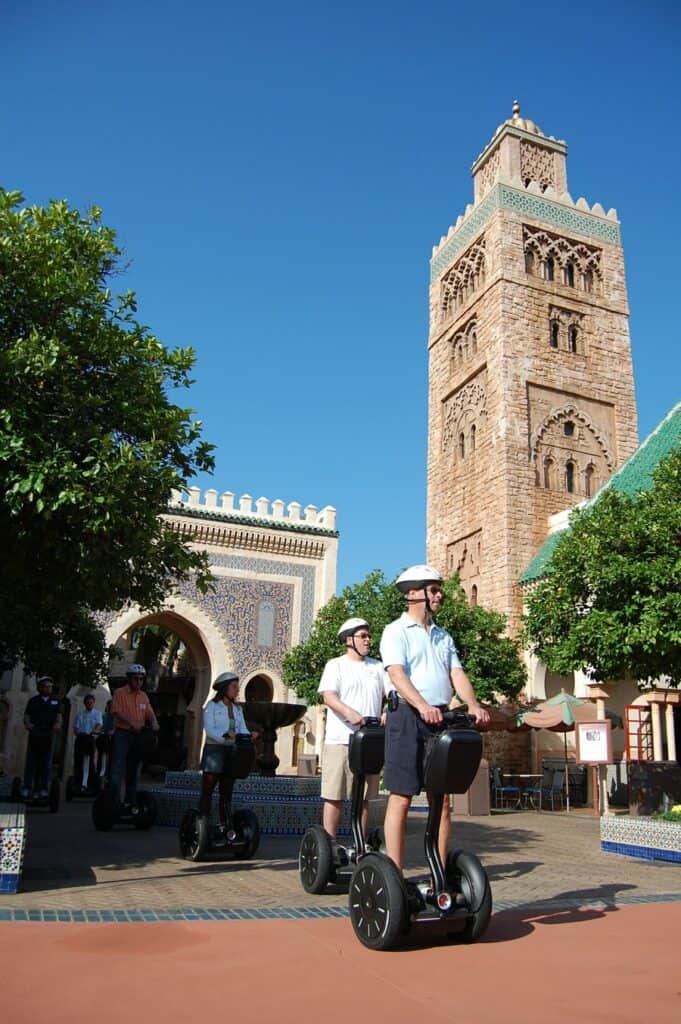 Guests can still take part in a Segway tour at Walt Disney World. The Wilderness Back Trail Adventure takes place at The Campsites at Disney’s Fort Wilderness Resort. If this is anything like the EPCOT tour, we’re sure that you are in for a treat.

At $90, plus tax, per person, Guests take part in a 2 hour tour around Disney’s Fort Wilderness Resort. This includes a 30-minute training session. This tour will offer a contrasting experience to the EPCOT Segway tour. Guests will navigate a variety of surfaces, including paved paths and woodland trails. This will make for the perfect experience for any nature lovers in your party. What a way to familiarise yourself with the stunning landscapes that this Disney Resort has to offer! 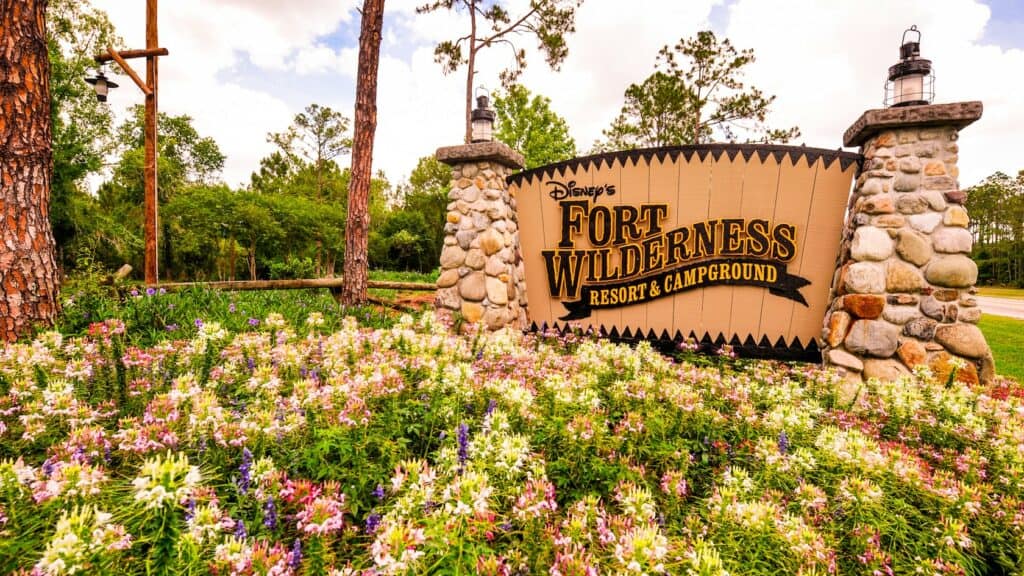 We were sad to hear that the ‘Keep Moving Forward: See The World, Share The Dream Segway Tour’ had ended in EPCOT. It was a wonderful experience to have taken part in, not forgetting how informative it was too.

For now, we’ll wait to hear if the Walt Disney Company will bring back this incredible opportunity, whilst reminiscing on an awesome time that was had!