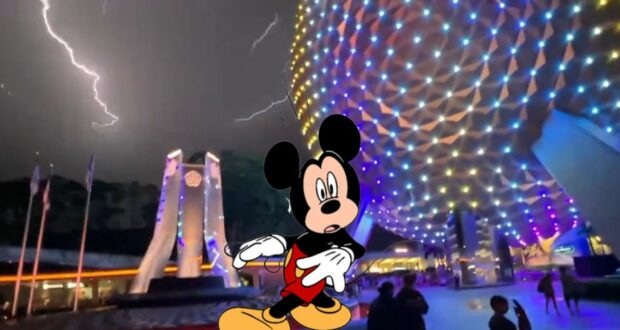 With “The Most Magical Place on Earth” located in the heart of Central Florida, it’s no surprise that Walt Disney World Resort can expect tremendous storms throughout the year, especially during the heat of late summer and early fall.

With every strong storm comes the ominous winds, heavy rain, and impressive lightning, seemingly competing with Disney’s nighttime spectaculars as it provides a glow in the sky! In this case, EPCOT was an especially popular Disney Park to spot an evening storm.

Not only did EPCOT recently face what looked like a tornado preparing to touch down near the Disney Park’s World Showcase, but a video also captured lightning spreading across the sky over the iconic Spaceship Earth ride.

@ScottGustin took to social media to share a video by @onlybecca1 on September 15, 2022, noting, “Awesome slow-mo video of lightning over Spaceship Earth at EPCOT earlier tonight.”

Check out the slow-motion video below, as well as the original video:

That’s so impressive! Thankfully, the funnel cloud and lightning storm passed without any reported damages.

Our top Disney Tip here is, whenever possible, to be sure to take cover during a storm within the Disney theme parks. We’ve seen other massive lightning strikes and flooding due to the torrential rain within the Parks

If visiting Disney during a storm, it is also great to know which attraction and Disney experience options operate during a storm, along with possible locations to duck for cover – such as a restaurant, shop, or even the restrooms in the case of a tornado.

From hurricane season to the inevitable Florida storm, be sure to keep an eye on the weather, even within the magical “Disney bubble!”

2022-09-16
Jamie Sylvester
Previous: Is There Room Behind Thunder Mountain for the Ideas Shown at D23?
Next: The Disney Dining & Drinks Spot With the Most Beautiful View