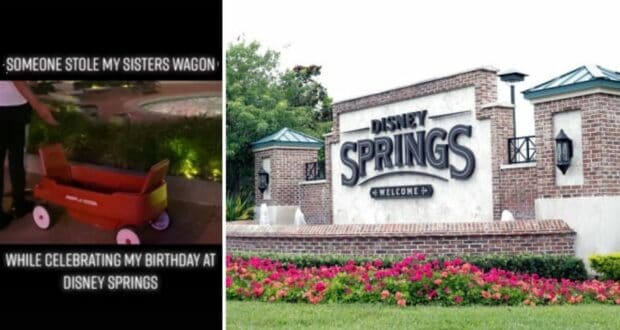 It would be an interesting birthday, to say the least, to have one’s wagon stolen while celebrating at Disney Springs!

When visiting Walt Disney World Resort with kids in tow, a stroller of some sort is usually top of the list to keep the little ones happy.

While we’ve seen stroller drama before such as the woman that screams at a Cast Member for moving parked strollers into the Park’s stroller parking area at Magic Kingdom, this time a red wagon is the cause of an unexpected incident.

A family was visiting Disney Springs to celebrate a birthday. The Disney experience changed quickly as the red wagon they were using for their child went missing. To their surprise, while walking through Disney Springs, they spotted the family that seemingly stole the wagon.

The family decided to follow the wagon to keep an eye on it, and enlisted the help of a Disney Springs security Cast Member along the way.

In the video, the family and security guard confronted the party that seemed to be involved in the stolen wagon at Disney Springs. The confrontation led to an angry discussion near the Planet Hollywood restaurant and Coca-Cola Store.

@animalale shared the video viral via social media with the note, “I WAS ROBBED, AND I CAN’T BELIEVE THEY ARE THE ONES WHO DID IT.”

Even though the family that seemingly stole the wagon says it is in fact their wagon, it was interesting to see how quickly the children jumped out of it when they saw security coming.

Comments on the viral video go on to point out, “No one is louder than a guilty person”; “They wouldn’t just give it up if it was truly theirs”; “People who buy the item ain’t gonna say ‘just keep it'”; and “I’m gonna label all my items when I go on trips now”.

It looks like the argument ended without any further confrontation and the family that took the wagon said they were leaving the Disney Springs property.

While we typically feel like our belongings are safe and secure at Disney, labeling items taken into a Disney Park, Disney Resort, and Disney Springs is an especially good Disney tip as you just never know who is going to be tempted to walk off with them.