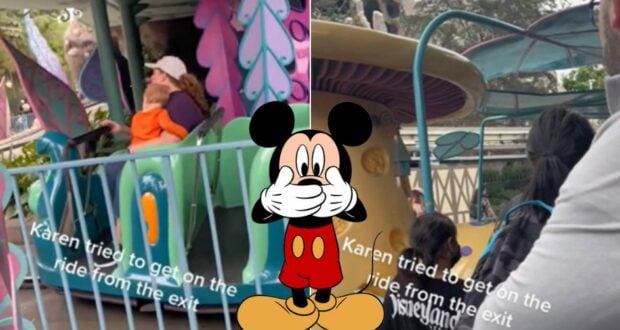 VIDEO: Mother Screams When Confronted for Skipping the Line at Disney

You just never know which Disney video is going to go viral next! From ride evacuations to Guests’ making poor decisions, the Disney Parks are not free from incidents despite the idea of the “Disney bubble” being perfect.

We’ve seen Guests get angry at Cast Members, but a new viral video has hit social media that adds to the poor behavior, as a mother (with a child on her hip) attempts to experience an attraction in Disneyland Park’s Fantasyland.

RELATED: NEVER Ask a Disney Cast Member to Valet a Scooter. Here’s Why!

In the video, a mother reportedly made the decision to attempt to enter a Disney Park attraction through the exit to skip the line for the family-friendly attraction, Alice in Wonderland.

When the mother is confronted by a Disney Cast Member, she screams “NO!” and exits the ride. Just when it looks like the mother is leaving the attraction for good, the video shows she is back, this time without the child, and screaming at a Cast Member as she would like to speak with someone “in charge.”

When the mother (deemed a “Karen”) spots that she is being filmed, she shouts, “Are you videotaping me? F*ck you!”

@u/trashofagirl took to social media to share a video of the situation, noting, “A mom at Disney decides she doesn’t have to wait in line.” Check out the video below:

With the details extremely vague, we aren’t exactly sure what pushed this mother over the edge to feel like she needed to scream in public.

If you’ve never experienced Alice in Wonderland, the Disneyland exclusive attraction is described by Disney as:

“You’re Late for a Very Important Date: Wind along a curving path surrounded by surreal sights, dazzling colors and madcap music as you retrace the steps of Alice and her adventures in Wonderland. Glide through the White Rabbit’s House, Tulgey Wood and the Queen’s Garden. Encounter Wonderland locals The Mad Hatter, Tweedledee and Tweedledum, The Cheshire Cat and more.

“Down and down you go, until you come face-to-face with the Queen of Hearts, who cries “Off with their heads!” Can you escape in time to make it to the “unbirthday” party, where you’re the guest of honor? Curiouser and curiouser!”

While the Disneyland Resort attraction is a cute ride through Wonderland, it’s not worth getting angry over and definitely not worth attempting to skip the line.