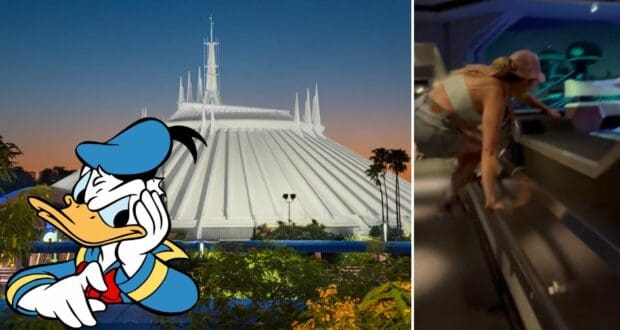 Another day… another Disney Guest making poor decisions. It seems like the latest trend is to make bad decisions while in a Disney Park and share them on social media for all to see. Well, one Disney adult decides to unwisely post a video of herself climbing into a restricted Space Mountain area.

As Guests exit the iconic Space Mountain thrill ride at Magic Kingdom Park in Walt Disney World Resort, the roller coaster exit offers some space-themed displays. One area after Guests exit the ride vehicle looks like a sitting room from the future. This Guest not only climbed into the restricted area but posted the video for all to see.

RELATED: “Where Were the Parents?” – Young Guest Trespasses in Dangerous Disney Climb

On August 28, 2022, a TikTok user named Emily Bleier (@embleier) posted a video of herself climbing into a restricted area at the exit of Space Mountain. She notes, “The only reason I ride Space Mountain #tommorowland #spacemountain #disney #disneyworld #rollercoaster.”

Here’s the video below:

RELATED: Surf’s Up! Man Tries To Catch a Wave in Disney Springs Fountain

In the comments, @embleier makes it sound like this isn’t the first time she has done this. Someone comments, “pls remember when we got yelled at for this” in which @embleier responds, “HAHAHA I had to redo it in honor of you guys.”

Comments to the post attempt to warn @embleier that she should know posting this to social media may not be the smartest idea with, “You might never be able to go to Disney Park again. Is that worth it?”; “great job! I see a ban in their future”; and “Ps…. So your aware security tends to use TikTok to catch what is missed.” Many comments also tag the official Disney Parks account.

Unfortunately for this TikTok creator, even if she attempts to pull the video, it has already been copied over to Twitter as posted by @megg9911 noting, “Can we… not do this…” as shown below:

We’ve seen lifetime bans before from Disney fans making poor decisions. One TikTok user has even made a plea to Disney CEO Bob Chapek to lift his lifetime ban at Walt Disney World because of the videos he posted, doing ridiculous things in the Disney Parks and Resorts.

Whether or not this TikToker will be banned for life for this Disney experience is still questionable. Not only is it a terrible idea to enter restricted areas at a theme, but it’s not so brilliant to post the video showing Disney exactly what you did wrong.