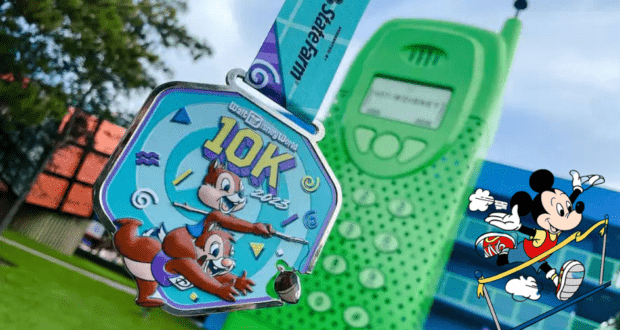 Sometimes we could all use a little motivation to go for a run, and if you are ready to go the distance at the Walt Disney World Marathon Weekend, this year’s finisher medals could be just what you need!

The 2023 Walt Disney World Marathon Weekend is celebrating the 30th anniversary of this iconic Disney event bringing runners from around the world to courses that span all four Disney Parks. Along the course, runners will encounter Disney characters and memorable scenes from past runDisney events.

And, upon completing each race, ranging from a 5K to Goofy’s Race to the Dopey Challenge, each runner will be awarded one of the new totally cool “retro” 90s medals. The Disney Parks Blog shared a first look at the medals that will be waiting for runners as they cross the finish line at each Walt Disney World Marathon Weekend event, and we are loving the 90s vibes. The 2023 medals feature favorite Disney characters, including the Fab Five and Dopey all decked out in 90s looks. Each event has its own unique medal so you can celebrate your race day achievements with different characters. The Walt Disney World 5K is the first race to kick off the weekend, and runners who finish this 3.1-mile course will be awarded medals featuring none other than Pluto. Doubling the race distance, Guests who complete the Walt Disney World 10K will have double the characters on their finisher medal with this adorable Chip ‘n’ Dale design. For those who can handle the extra couple of miles beyond the 10K, Donald and Daisy Duck are the characters who can be found on this year’s Half Marathon, 13.1-mile course, finisher medal. And of course, Mickey and Minnie are styling in their 90s looks on the 30th anniversary Walt Disney World Half Marathon medal, offering something extra special for those runners who can complete the astounding 26.2-mile race. Beyond the individual races, the Walt Disney World Half Marathon Weekend also has special medals available just to those Guests who complete multiple events. The Goofy Race and a Half Challenge comes with its own medal for runners who complete both the marathon and the half marathon (a total of 39.9 miles). And, the Dopey Challenge has its own medal, too, just for Guests who complete all four races over the weekend. All four races total out to 48.6 miles, so that much running is certainly deserving of the extra medal!

The Walt Disney World Marathon Weekend takes place January 4-8, 2023. In-person events are sold out, but there is still time to register to participate in a virtual event that would allow you to complete the run on a course of your choosing at home to still earn a finisher’s medal.

Our Premier Endurance Event Weekend – 30 Years Running
Test your mettle at your chosen skill level—from the 5K to the Marathon—while you trek your way through the Disney theme parks. When you participate in the 2023 Walt Disney World Marathon Weekend, you’ll become part of something incredibly special.

Not only is the 50th Walt Disney World Resort Anniversary celebration underway, but this year will mark the 30th Anniversary of the Walt Disney World Marathon Weekend Presented by State Farm! Come relive decades of healthy competition with a dose of 90’s retro vibes, iconic Characters and a glimpse into the runDisney of years of past.

If you are interested in registering for a virtual runDisney event, visit runDisney.com. In the meantime, best of luck and have an amazing time at your next race!

2022-08-29
Brittany DiCologero
Previous: Could a ‘Princess and the Frog’ Restaurant Follow Disney’s Changes to Splash Mountain?
Next: Why Is Disney Closing Such a Popular Roller Coaster Attraction?