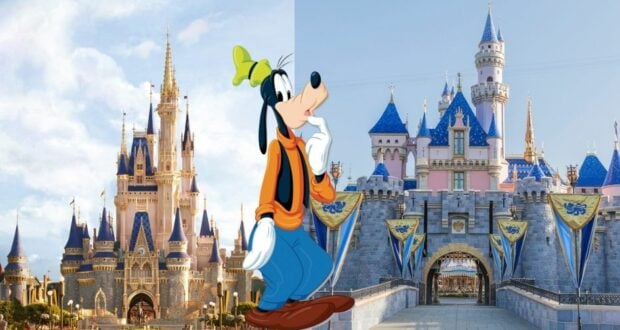 What No One Tells You About Your First Visit to Disneyland

I’m a huge Disney nerd. I’ve grown up at Walt Disney World Resort and have visited countless times. I try to know all things Disney and am typically the person family and friends call for Disney advice when planning a vacation to Walt Disney World. But, after all these years, I FINALLY visited Disneyland for the first time! Here’s what no one told me.

We were warned about this one but didn’t fully understand just how small Disneyland would feel.

Once inside Disneyland Park or Disney California Adventure Park, everything is much tighter and close together within the Parks, making going from one area to the next a breeze. Even hoping from one Park to the other can be done with ease.

Since Disneyland has yet to introduce its promised MagicBand+, visiting Disneyland means no MagicBand is needed. It’s an odd feeling, but you pull your ticket and any Genie/Lightning Lane selections up via your phone.

Want to pay for something? With no MagicBand, use the Disneyland App for mobile ordering or merchandise check out (or be prepared to pull out your credit card).

We’ve tried Disney Genie+ (former complimentary FastPass service) at Walt Disney World. It’s not terrible, but let’s say it’s 9:00 am… you can suspect to be attempting to make a Genie+ for closer to 11:00 am. This, however, is not the case for Disneyland.

If you buy Genie+ ($20 per person per day) at Disneyland, you can practically walk on every ride. When looking for a Genie+ reservation, they are typically available for the current time, which is very different from Disney World. At Disneyland with Genie+, it was one ride after another!

The Indiana Jones-themed ride is incredible. It’s like an extra fun DINOSAUR attraction at Disney’s Animal Kingdom attraction. If visiting Disneyland, be sure Indiana Jones Adventure is a priority.

Dare we say, when walking off this attraction, we even had the thought that this ride should come to Disney’s Hollywood Studios as a replacement for Indiana Jones Epic Stunt Spectacular.

While you may think visiting Pirates of the Caribbean at Walt Disney World or Space Mountain and Big Thunder Mountain keep you from needing to experience them at Disneyland, you are wrong!

In fact, Pirates of the Caribbean, Space Mountain, and Big Thunder Mountain are just a few attractions that are very different from Walt Disney World’s version.

RELATED: Which of Disney’s 5 Pirates of the Caribbean Attractions Is Best?

In all honestly, Disneyland does much of the attraction experience better. For example, Disneyland’s Pirates of the Caribbean is like experiencing an incredible extended version of Disney World’s version.

Some Rides are the EXACT Same

With that said, yes, some rides are identical. If you’ve done or are not huge fans of Star Wars: Rise of the Resistance or Millennium Falcon: Smuggler’s Run, they are no different at Disneyland, so save your time and visit other attractions.

When visiting Walt Disney World, most of the quick service locations will require Guests to mobile order via the My Disney Experience App before entering the restaurant for a seat.

At Disneyland, it doesn’t seem like many people care to mobile order. It reminds us of the way Disney World used to be when you just went into the restaurant, have the family find a seat, and go to the counter to order food.

It’s a Great Way to Save Money

Trying to decide between Disneyland and Walt Disney World? If the flight budget is not an issue and you can reach either destination, you’ll save visiting Disneyland over Disney World.

You’ll only be paying for two Parks vs. four to experience many of the same (or at least the best) attractions. With so many non-Disney Resort Hotels a stone’s throw away from the Disneyland Parks, it’s easy to find a cheap place to stay vs. Walt Disney World’s hotel costs.

The Walt Nostalgia Is Real

Disneyland was Walt’s baby, and you can feel that when visiting Disneyland Park. There is something unique about exploring the Park, especially Main Street, U.S.A, knowing Walt used to patrol the area and had a hand in so many of the attractions.

The amount of restaurants and experiences at Disney Springs in Florida is almost overwhelming. But Downtown Disney in California is almost laughable in size.

RELATED: The Places You MUST Visit at Disney Springs

Furthermore, Downtown Disney is right outside of Disneyland Park and Disney California Adventure. Disney Springs is almost like it’s own Park at Walt Disney World.

Keep in mind, this is an opinion from a die-hard Walt Disney World fan.

While we love several attractions at Disneyland better than Walt Disney World, we will say Disney World beats out Disneyland due to its sheer size and ability to cater to all Guests, with a seemingly endless sea of entertainment and rides.

We do love that Disneyland Resort is manageable. It feels like a perfect weekend vacation away. But, if you’re looking for that destination Disney experience, Walt Disney World still can’t be completed in a week’s time.

The bottom line is all Disney fans should try visiting both Walt Disney World and Disneyland if they ever get a chance! They are both magical in their own ways.