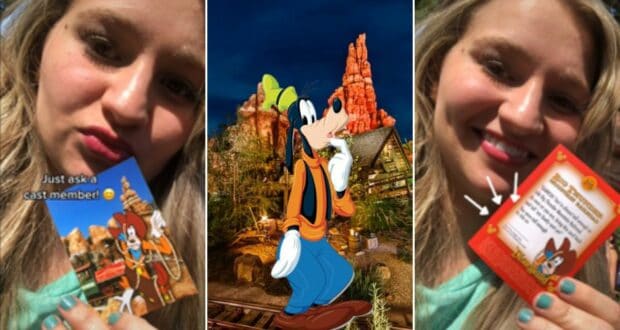 While we’re all for sharing Disney tips and tricks for both Walt Disney World Resort and Disneyland Resort, it seems like TikTok is on a Disney “hack” trend, causing fans to be concerned Disney will stop magical moments due to abuse of freebies.

It wasn’t too long ago we shared the Disney hack a teacher videoed, collecting several free Disney celebration buttons for her students. Another video shows a Disney fan’s hack for bending 3D glasses so they fit children’s heads better… but ultimately destroying the glasses.

RELATED: The Best FREE Souvenirs You Can Get at Walt Disney World Right Now

And we can all remember the viral “free shirt hack” with Disney fans attempting to get free shirts when they were dress coded for wearing inappropriate clothing. Disney caught on to this and quickly stopped as they now send the Guest away or ask them to purchase a shirt.

The concern among Disney fans is that all these “hacks” could lead to Disney stopping the magical moments or free offerings because of the sheer volume of Guests attempting to take advantage of the system.

Alexa Erekson (@themeparkauthor) took to social media to share a TikTok video that is going viral with comments of concern surrounding her encouragement that Disney fans can take advantage of a way to skip the line. Check out the video below:

In the short video, Alexa Erekson lets her viewers know that kids who are not tall enough to ride some of the attractions at Disneyland Resort can get a Disney FastPass card to get to the front of the line for when they are eventually tall enough to ride. She shows a Goofy pass received from Big Thunder Mountain Railroad at Disneyland Park. In the video, it notes, “Just ask a Cast Member!”

With Disney Genie at both Walt Disney World and Disneyland, this “Fast Pass” would be equal to a Disney Genie pass, allowing the Guest to enter through the individual Lightning Lane much like a family would do if needing a rider switch pass.

The comments to the video, however, are concerned this will be another Disney Park “hack” that will lead to abuse of magical moments:

“Please don’t just go up and ask for this. this a thing for cast to make magic. not every ride will have it.”; “Yeah this is supposed to be a magical moment thing we don’t hand this out to every short child.”; “Great another thing Disney is gonna stop because it’s now gonna be a “hack” instead of a magical moment.”; “I’m begging you take off that note asking for the pass. This is something we’re barely even allowed to give out as it is.”; and “Great another tiktoker that is going to ruin what little magic cast members are allowed to give out.”

The creator of the video, Alexa Erekson, clarifies in the comments, “This is obviously for children. If you want one for your child, like I did mine, then ask. But if you just want a souvenir, please don’t abuse this.”

If you’ve ever experienced the magical moment where a Cast Member pixie dusts you with something special out of the blue, it’s a very exciting and memorable Disney experience. Will these “hacks” going viral on TikTok, however, lead Disney to pull some of these freebies due to abuse? Only time will tell.