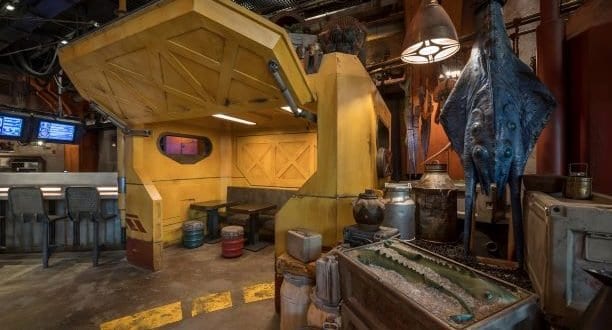 Many of Walt Disney World’s most popular restaurants are table service venues that invite you to sit and stay awhile. But what if a Guest is on the run, looking for a faster option that still offers delicious food and a great atmosphere?

Luckily, quick service restaurants abound in WDW in Disney Springs, inside Disney Theme Parks, and at Disney’s Resort Hotels. Whether you’re in Disney’s Magic Kingdom, EPCOT, Hollywood Studios, or Animal Kingdom, there’s a wonderfully themed quick service restaurant ready to wow you. Here are just a few top picks within Walt Disney World Parks – which would you add to the list?

With a name like Restaurantosaurus, the fun seems built right in. And this delightful paleontology-themed eatery in DinoLand USA at Disney’s Animal Kingdom does not disappoint! Restaurantosaurus is an easy choice for Guests with children, but even if you don’t have kids and are tempted to skip DinoLand USA altogether, it’s worth stopping by for a bite for the great food and creative decor.

The story? Paleontology students turned their labs, dorm, and cafeteria into a restaurant, where you’ll find lots of quirky sections to enjoy your meal. Dinosaur bones and artwork abound and look closely for some pun-ny dino dad jokes that are so bad they’re good. The place has an authentic, industrial vibe that makes you think Ellie Sattler and Alan Grant might walk in any moment for a break from their dig!

Dining at Docking Bay 7 Food and Cargo in Star Wars: Galaxy’s Edge at Disney’s Hollywood Studios is a no-brainer since there’s no table service restaurant in Black Spire Outpost! You’ll know you’re there when you see the shuttle parked on the roof, revealing this out-of-this-world eatery’s hangar bay theme.

As you’d expect in a working cargo bay, shipping containers dot the vast industrial, intergalactic interior, and you can even eat inside one and sit on barrels to complete the experience. We love the unapologetically gritty theming and how it makes Guests feel like they’re part of the Star Wars universe. Check out the outdoor seating with its crumbling marketplace walls for some of the best views of Galaxy’s Edge.

If an animatronic alien has never serenaded you as you eat, you should really dine at Cosmic Ray’s Starlight Café in Tomorrowland at Disney’s Magic Kingdom. In addition to the music stylings of Sonny Eclipse, Guests can also enjoy the futuristic space-age décor.

If that’s not enough, the fact that this is the biggest quick service restaurant in WDW’s Magic Kingdom earns Cosmic Ray’s some serious points. You’ll find lots of seating inside, and there are three different bays where you can order from different menus, so no need to visit multiple restaurants when every member of your party wants a different meal. If you arrive at a particularly busy time and there aren’t any free tables, keep circling – with so many seating areas, tables are constantly being vacated.

Guests pining for the former Hollywood Studios attraction Studio Backlot Tour will feel a surge of nostalgia when they step into Backlot Express! Replete with movie props, stunt gear, storyboards, and even hilarious memos left for backstage crew members, Backlot Express is Disney’s take on a movie studio workshop, and we can’t get enough.

There are several different areas to dine in, so you may find yourself surrounded by Greco-Roman statues waiting to be painted or sit in the paint department with its many, many cans of paint. Stunt dummies and stunt gear bring another area eerily to life. Remember to look around at the details because the safety notices, signs, and notes to and from crew members are some of the most rewarding eye candy in Hollywood Studios’ Backlot Express!

Pandora – The World of Avatar at Disney’s Animal Kingdom boasts some of the most breathtaking theming in WDW, so it’s no surprise that the quick service restaurant here offers fantastically unique décor (and food). Themed as a former RDA mess hall that’s now been taken over by Alpha Centauri Expeditions, Satu’li Canteen features Na’vi artifacts and crafts but also some cool remnants of its RDA past, which all adds up to an endlessly intriguing interior!

The intrigue continues to the delicious food itself, different from typical quick service food in WDW (after all, you are on a different planet now!). You’ll find nutritious choices here that manage to taste amazing and also look delightfully other-worldly.

Quick service restaurants in Disney’s Hollywood Studios, Magic Kingdom, EPCOT, and Animal Kingdom are designed to accommodate Guests looking for a fast meal or snack break during a busy day in a WDW Theme Park. But our favorite venues, like the ones above, are full of fun, drama, and ingenuity at every turn – and they invite you to linger and appreciate not only your delicious food but the deliciously themed details waiting to be discovered.