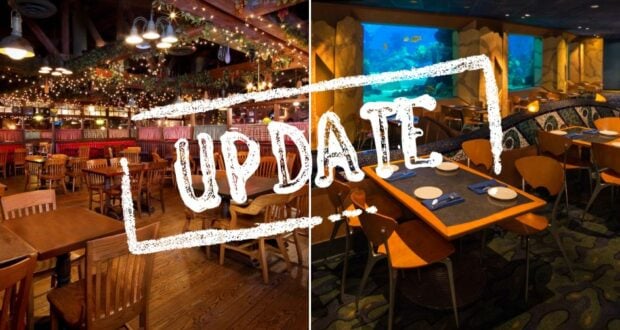 Between quick-service restaurants, table-service restaurants, signature dining, food kiosks, and more – Walt Disney World Resort offers roughly 400 places to enjoy its delicious Disney food between its Parks and Resorts. And now, Disney has revealed enhancements are arriving at two of its most underrated restaurants.

First up, head on over to Disney’s Hollywood Studios, where Mama is cooking up yummy Italian dishes in the Grand Avenue portion of the Disney Park. Nestled just past Muppet Vision 3D and the quick-service restaurant PizzeRizzo, Mama Melrose’s Ristorante Italiano is a table-service restaurant that is often overlooked with mixed reviews.

Not only has Disney announced the return of Hollywood & Vine’s buffet, but Disney’s Hollywood Studios offers other rock-star restaurants such as Hollywood Brown Derby and Sci-Fi Dine-In Theater. With this restaurant mix, Mama Melrose often gets forgotten, making it one of the easiest to snag a dining reservation for. Well, now, Mama is debuting a new menu!

“For starters, the Fried Fresh Mozzarella is a must-try with marinara sauce, ricotta Salata, and lemon oil, while the Grilled Bone-in Pork Chop entrée can’t be missed. This dish is accompanied by creamy polenta, roasted tomatoes, mustard vincotto, and charred broccolini. You can also indulge in enhanced versions of Mama’s Italian Pasta and the Sustainable Fish dish. For a grand finale, there are several new eats to choose from – the Mini Cannoli Trio, Colors of Italy Cheesecake, Mama’s Cookies To Go, and Blueberry Frangipane Tart. Now that’s a well-rounded dessert menu.”

Mama mia! All of that sounds incredible, especially the Mini Cannoli Trio. Be sure to make dining reservations 60-days in advance to ensure a spot at Mama Melrose.

The excitement of visiting EPCOT right now is at the forefront of many Disney fans’ minds. With the new Guardians of the Galaxy: Cosmic Rewind, new dining experiences such as Space 220, and the transformation of EPCOT into four neighborhoods well underway – it’s easy to hurry past an often overlooked restaurant known as Coral Reef.

Coral Reef Restaurant is located in EPCOT’s World Nature neighborhood, next to The Seas with Nemo & Friends. The restaurant boasts a stunning wall of a massive aquarium with more than 2,000 amazing sea creatures who call it home.

Disney has announced that enhanced items are on the way to Coral Reef Restaurant! Disney reveals:

“Start off your meal with new appetizers like the Trio of Seasonal Dips with fresh vegetable crudité and crisps or the New England Clam Chowder. As you enjoy the incredible underwater views, feast upon entrée additions like the Orange-glazed Sustainable Salmon served with vegetable stir-fry and shiitake sticky rice. If this doesn’t quite float your boat, consider the Cajun Chicken Pasta filled with pulled Cajun-spiced chicken, parmesan cream sauce, roasted mushrooms, peas, peppers, and onions.”

Just like Mama Melrose, even though Coral Reef is often an easier dining reservation to obtain, you’ll still want to snag one 60-days in advance of your dining date to ensure a table. Happy dining, Disney fans!