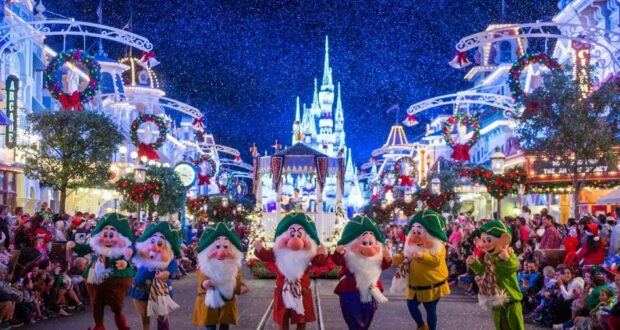 It’s beginning to look a lot like… Christmas??? We may be in the middle of the hot and sunny June, but summer doesn’t stop Disney from preparing for the holiday season! Disney is getting ready to celebrate “halfway to the holidays” with a teasing announcement that news will drop soon.

@DisneyParks took to social media on June 20, 2022 to announce, “Join us all week as we celebrate #HalfwaytotheHolidays with jolly surprises, limited-time offerings, sneak peeks, and more. Keep an eye out for more details on the Disney Parks Blog!”

What possibly could the news be? When Walt Disney World celebrated “Halfway to Halloween,” they announced the big news that Mickey’s Not-So-Scary Halloween Party (MNSSHP) would be making a grand return for Fall 2022. The 2021 version of the Halloween party known as Disney After Hours Boo Bash didn’t receive the best reviews, so Disney fans were thrilled with the news of the return of MNSSHP!

RELATED: The New Disney Christmas Ornaments Have Got Us Thinking…

While we aren’t too sure exactly what Disney will announce, we do suspect the holiday party news will drop for Walt Disney World Resort and Disneyland Resort this week! We also expect this “halfway to the holidays” to likely include merchandise news, along with extras such as holiday recipes.

Keep holding on to that mistletoe, Disney fans! We’ll be sure to share Disney holiday updates as soon as the news is released.