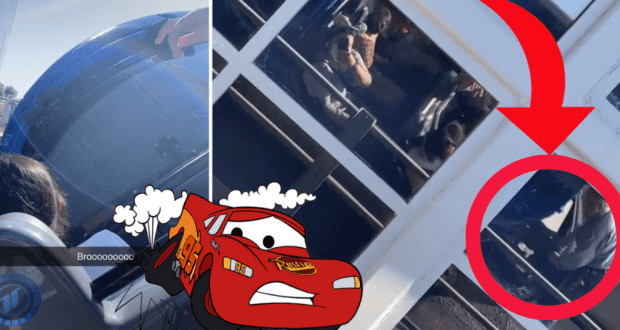 Another ride breakdown has transpired at the Most Magical Place on Earth, and this one put Guests in a very precarious position. We’ve shared several ride malfunctions lately, some humorous, some uncomfortable, and some downright scary!

EPCOT is home to some of the most popular rides at Walt Disney World Resort. Most recently, Guardians of the Galaxy: Cosmic Rewind has fans eagerly lining up for the epic roller coaster experience. Another popular attraction at the EPCOT’s Theme Park is Test Track. After Guests create their own virtual concept car, they load into a 6-passenger vehicle to take it for an exciting spin. The ride transports those onboard through a winding course filled with obstacles and rough terrain.

Accelerating up to a speed of 65 miles per hour, it’s a thrilling attraction for Guests. Unfortunately, a malfunction rendered the ride motionless at an unideal spot in the experience. A TikTok video posted by @bickythemouse shows Guests stuck on the track at a steep incline.

A reflection shows a Walt Disney World maintenance man working under the car’s hood to get it back in motion. In a follow-up video, the content creator shared that it took the Cast Member about 7-8 minutes to arrive on the scene.

Unfortunately, although the time they had to wait was short, the position they were forced to stay in made it extremely uncomfortable. Guests had to sit at a severe incline for an additional 20 minutes until the ride was fixed. The TikToker describes the angle as so steep that the people on her right were practically above her!

In response to the circumstances, a fellow passenger onboard screamed in panic, causing unknowing bystanders to compile below. The Disney content creator said the seat belts were very uncomfortable, and although she’d ridden the attraction before, the malfunction scared her.

Guests were compensated by merely being asked if they wanted to ride again. Though there haven’t been any confirmations of a fire, Guests smelled burning, which makes it completely understandable why they panicked. We’re glad everyone on board was safe after the unfortunate incident!