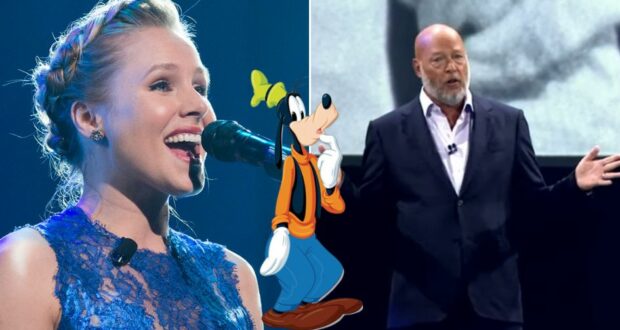 The 2022 D23 Expo has officially arrived! We are boots on the ground here in Anaheim, California, with the Disney fan convention in full swing. Disney CEO, Bob Chapek, has made it very clear that this will be one of the biggest D23 Expos we’ve ever experienced, and so far, Disney is delivering!

During the first massive D23 Panel, Disney Legends, Disney celebrated several Disney actors, actresses, and Imagineers that are now titled Disney Legends. But, not to the surprise of many, when CEO Bob Chapek took to the stage for the panel, the boos were louder than the cheers.

Not only did Chapek get booed, but when Bob Iger was mentioned, fans cheered as the name of the former Disney CEO that was replaced by Chapek.

Chapek has had a rough go with Disney fans with the change in several Disney experiences, such as the upcharge service Disney Genie+, his deep involvement in politics, and beyond.

So, when the new Disney Legend and voice of the beloved Princess Anna from Frozen (2013) took to the stage to be awarded as a Disney Legend, her mention of both Bob Iger AND Bob Chapek did not go unnoticed.

During Bell’s speech, she sweetly shared, “Disney taught me to dream big and follow my heart… and that it’s TOTALLY appropriate to burst out into song at any moment.” — Disney Legend @KristenBell #D23Expo.”

But, as she shared her love for Disney as a child, she mentioned that she even once dressed as former Disney CEO Bob Iger. She then addressed the current CEO, Bob Chapek, by letting him know she’ll likely be dressing up as him too either for either Halloween or her birthday… but she has yet to decide which holiday.

The awkward comment was felt in the room… and we know because we were there! It felt like the Halloween dress-up as Bob Chapek comment was almost a jab after just saying she dressed up after Bob Iger as a child.

With Halloween fast approaching, now we can’t help but keep an eye on Bell’s social to see if/what she really dresses up as. And if not Halloween, maybe we’ll see her dress as Chapek for her birthday on July 18.

2022-09-09
Jamie Sylvester
Previous: The New ‘Disney Legend’ Imagineers Whose Work You Love at Disney Parks
Next: Disney and Amazon Join Together to Create New Disney Magic