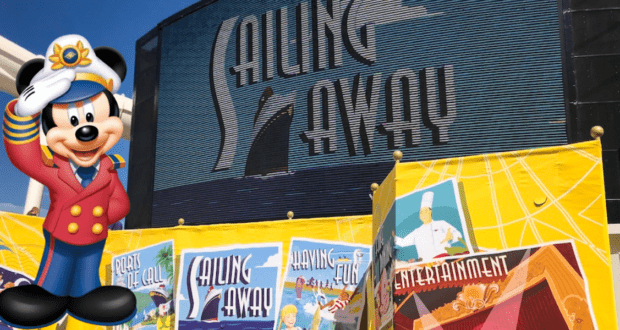 A cruise with Disney Cruise Line is a truly magical experience, from the second you step aboard a Disney ship through to the minute you disembark.

Now, we have some great news to please any new or returning fan of Disney Cruise Line – the Sailing Away Deck Party is officially returning! 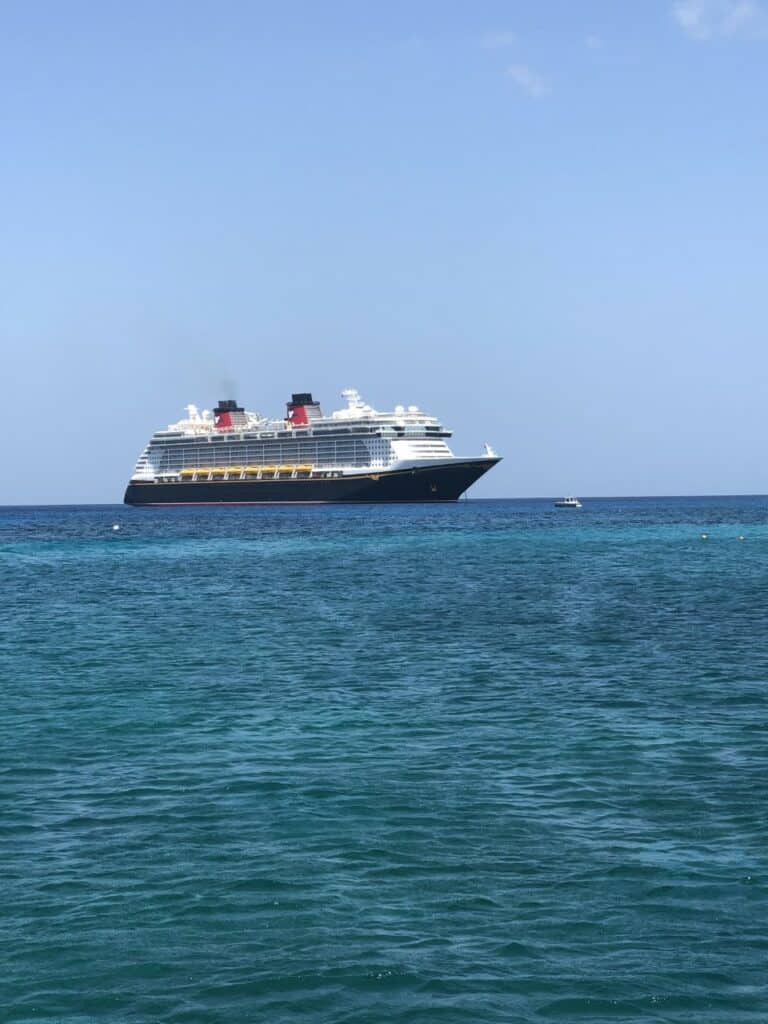 Each and every Disney Ship provides its own unique adventure, whilst upholding the outstanding Guest experience that the Walt Disney Company is known for. Disney Cruise Line currently has 4 ships in its fleet: Disney Magic; Disney Wonder; Disney Dream; and Disney Fantasy. That is, until July 14 this year, when the Disney Wish will sail her maiden voyage from Port Canaveral.

The Disney Magic is special to any Disney Cruise Line Castaway Club member as it was the very first Disney cruise ship to set sail. The Disney Wonder offers Guests the chance to dine in Tiana’s Place, a restaurant that serves up southern cooking and live jazz music inspired by The Princess and the Frog (2009). The Disney Dream currently offers cruises around the Bahamas to Disney Cruise Line Guests and features Admiral Donald in the Atrium. Meanwhile, the Disney Fantasy sails around the Caribbean and features Mademoiselle Minnie Mouse.

The Disney Wish is set to be the largest Disney Cruise Line Ship to have set sail yet. It is no doubt that the opening of this ship is set to be a prestigious one. Cast Members are currently assisting in the preparation of the ship. It is currently in the Netherlands, receiving final interior and exterior touches, before it embarks on its journey across the Atlantic Ocean to Port Canaveral. 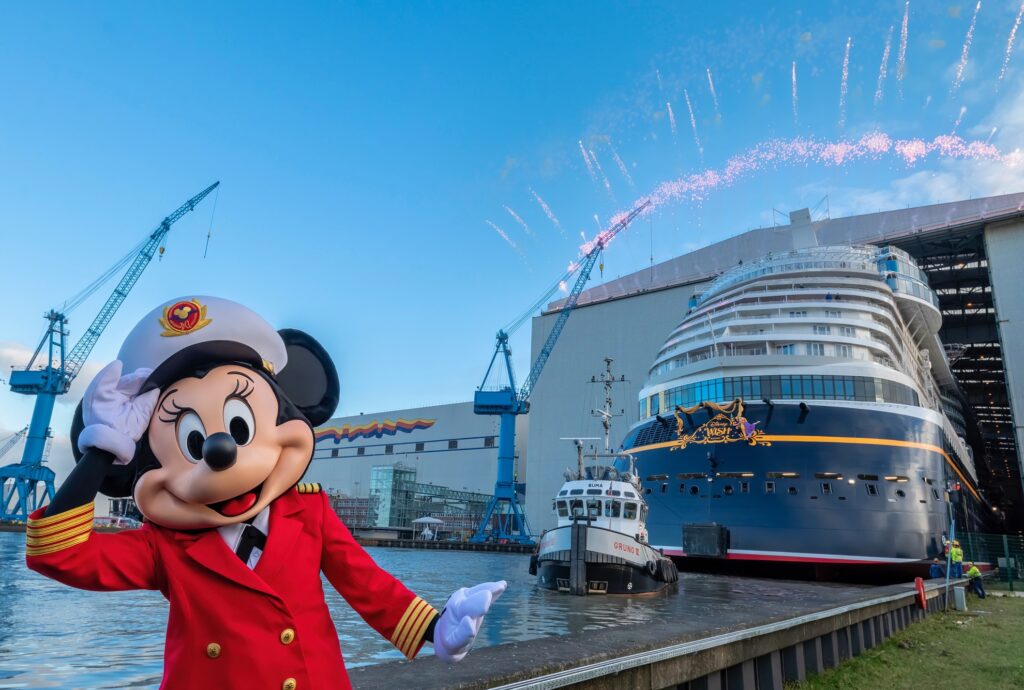 A Guest-favorite is returning

But there’s another thing that we are incredibly excited to hear about! Revealed today, April 18, by a Disney Cast Member on Instagram, Disney Cruise Line will host the first Sailing Away Deck Party since the closure of the Disney Ships on March 14, 2020.

As we write, Cast Members are preparing to make the return of this Guest-favorite to a Disney Cruise. Guests embarking on the Disney Dream from Port Canaveral are sure in for a magical surprise today! 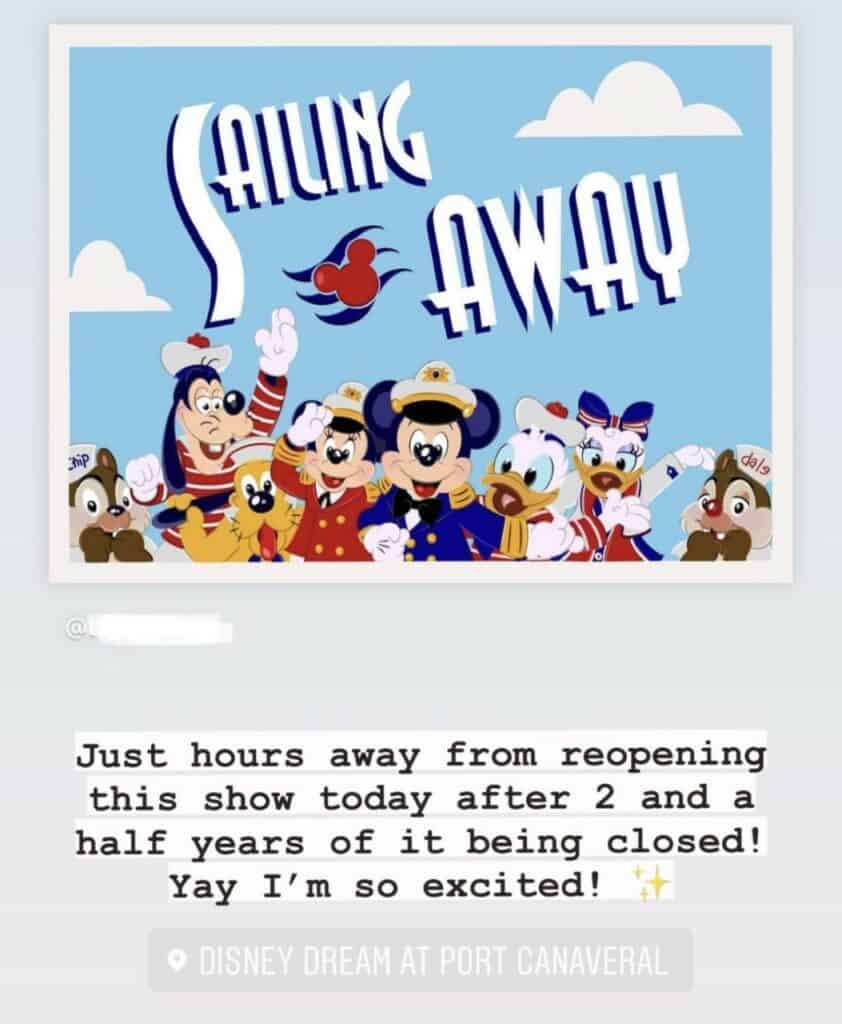 The Sailing Away Deck Party is the first opportunity that Guests get to see their beloved Disney characters when embarking on a Disney cruise. It’s the time when Guests, Cast Members, and Disney characters come together and celebrate their Disney Cruise vacation.

Not only is it a celebration to start a vacation, but it also marks the Disney cruise setting sail from its port. 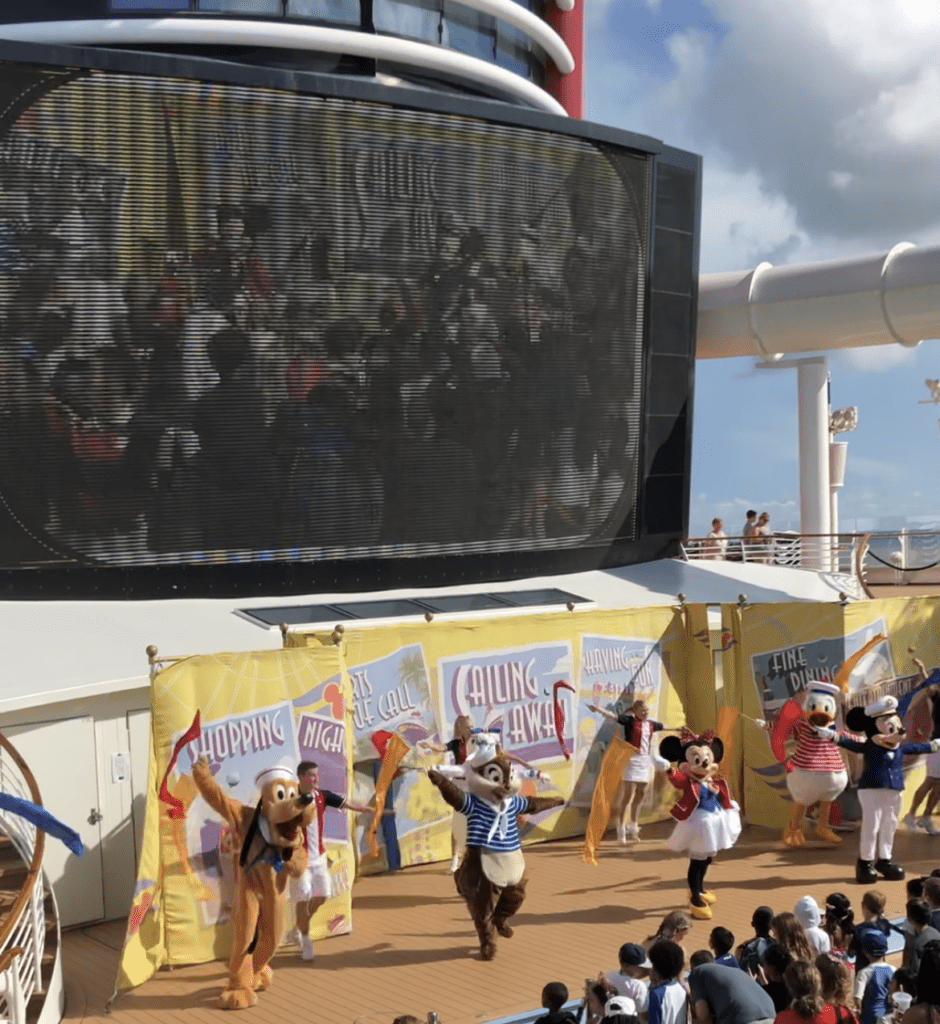 Located on Deck 12 on the Disney Dream and Disney Fantasy, Guests can dance to lively beats, take part in fun dance numbers and get to know their Cruise Staff team. They even get to see Captain Mickey Mouse, Minnie Mouse, Donald Duck, Daisy Duck, Goofy, Pluto, and Chip ’n Dale, on stage.

Once the Disney characters and Cast Members have been welcomed to the stage, the cruise countdown is set and ends with the very first sound of the ship’s horn. Cue goosebumps and tears of happiness as Guests hear the incredible sound of Disney’s iconic songs “When You Wish Upon A Star” or “A Dream Is a Wish Your Hearth Makes”. Pure magic!

We can’t help but think that the return of this Guest-favorite is in preparation for the opening of the Disney Wish. And we certainly aren’t mad about it! Whilst the Sailing Away Deck Party hasn’t been taking place, Guests have been treated to a no-less-magical, but different experience when embarking on a Disney Cruise. This was known as the Welcome Aboard Show. 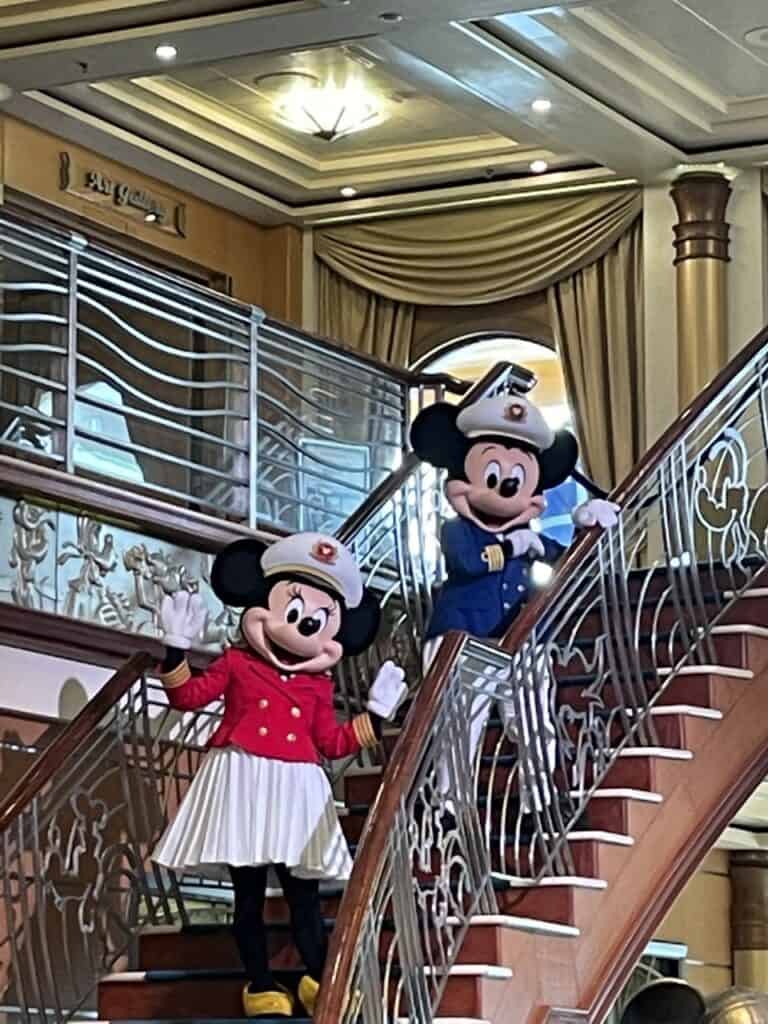 Whilst other Deck Parties were offered during sailings to this point, they were not exclusive events, but rather ones that were shown multiple times during an itinerary. The Freezing the Night Away has been a popular Deck Party to have been featured, starring Elsa, Anna, Olaf, and Kristoff, from Disney’s Frozen (2013). 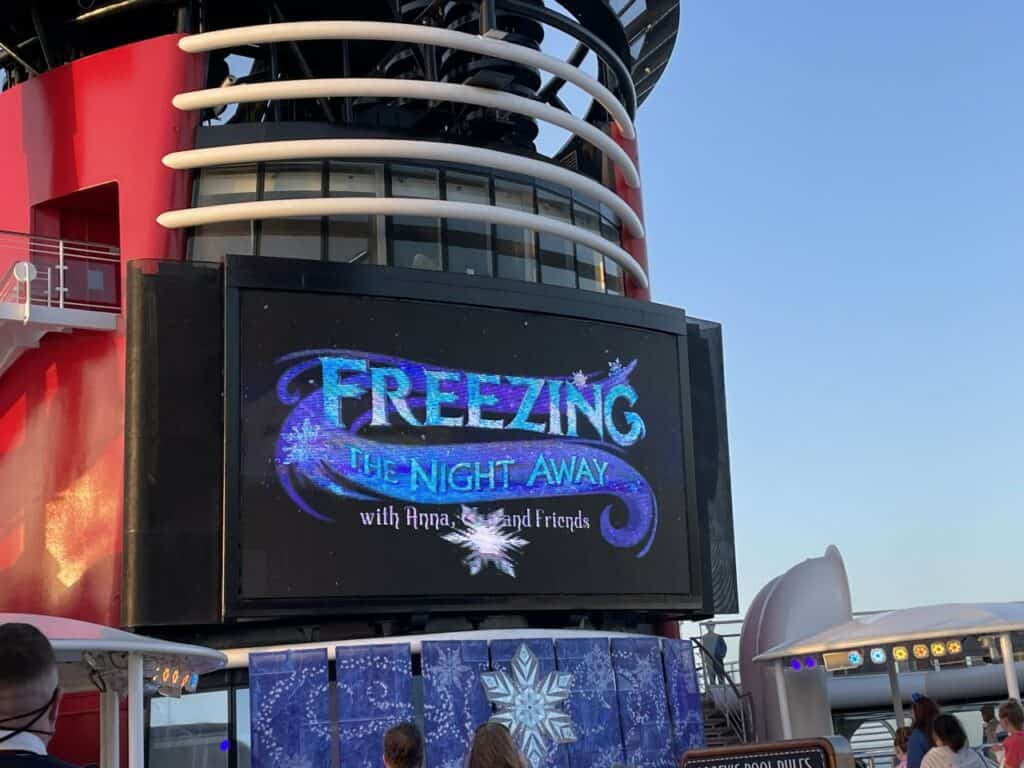 We’re so excited to hear about the return of the Sailing Away Deck Party. This sail away celebration is the perfect way to begin a Disney Cruise.

We know, for sure, that you’re in for a magical start to your next Disney Cruise now that it is returning. So next time you’re on board, make sure you plan to attend this exciting event and “Sail Away” in style! You’re in for a Disney vacation like no other.

2022-04-18
Victoria Mills
Previous: The One Disney Guest You DON’T Want on a Ride With You
Next: HUGE Milestone for Disney Cast Members