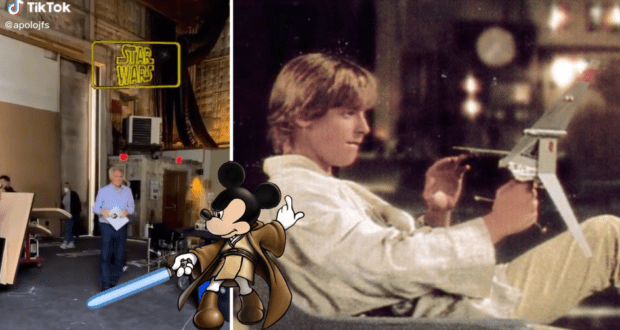 VIDEO: Veteran Star Wars Actor Seen Playing With a Toy on His Birthday!

A hilarious video has surfaced of famous Star Wars actor Harrison Ford on his eightieth birthday. Posted on TikTok by @apolojfs, the performer appears to be on a movie set when he’s surprised by the cast and crew, who have a celebratory cake waiting for him.

Ford casually strolls in to a melody of Happy Birthday being sung by his friends. The caption explains that the actor was born on July 13, 1942, in Chicago, Illinois. As he approaches the table decorated in an airplane motif, in honor of the actor’s piloting hobby, Ford places down what appears to be a script and faces the audience. Someone approaches from behind, placing a party headband on him, as he playfully gestures, wondering where his birthday sash is!

He looks down at the candles, which say 80, admiring the cake’s details. He then proceeds to pick up a toy jet adorning the top of his dessert, making airplane noises like a schoolboy. as he flies it around the room!

Everyone starts cracking up as Ford waves goodbye and pretends he’s leaving. He doesn’t, of course; he comes back to the table and offers thanks to the group, appreciating the sweetness of their gesture.

The comical actor then says, “I really didn’t mean to be so pathetic this morning that you had to do this,” to which the group breaks out in laughter again. As he flips through the card, he seems to get emotional, smiling as he states, “This is really sweet, thanks very much.”

The crowd applauds, wishing him a happy birthday, and the video comes to an end. Harrison Ford starred in the original three Star Wars (1977) movies alongside Mark Hamill and Carrie Fisher.

The Indiana Jones (1981) actor also appeared more recently in Star Wars: The Force Awakens (2015), where his character Han Solo is killed by his defiant son Kylo Ren. We hope the beloved actor had a wonderful eightieth birthday!