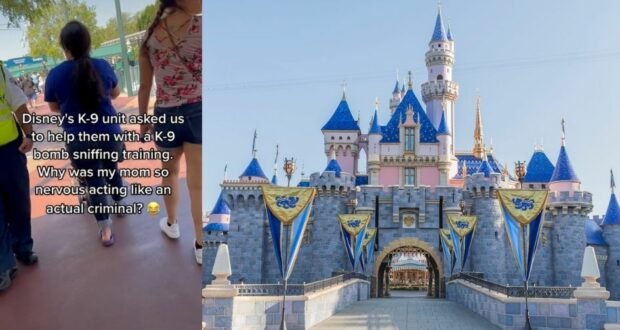 Time to head to the Disney Parks! As you approach security, chances are the last thing you’d think about is helping with a K-9 bomb sniffing training… but this family stepped up to assist.

When visiting Walt Disney World Resort, Disneyland Resort, or any of the Disney Park, it’s very obvious Disney’s security is top-notch. Since the COVID-19 pandemic, even more efforts have been put into a seamless security checkpoint that now allows Guests to walk through checkpoints without having each Disney Park Guest needing to open his or her bag.

Have an umbrella? Just be sure to hold that out in front of you when passing through to avoid being pulled into the special bag check line. Outside of the security checkpoints prior to entering the Disney Parks, Disney also has several undercover police positioned throughout the Parks that are made to look like you and me to go unnoticed unless there is an emergency or in the incident of a fight.

Most recently, we’ve seen Disney add security Cast Members to the conflicts areas on rides such as Frozen Ever After at Walt Disney World’s EPCOT where the Lightning Lane and Standby line met up, as this can be a high-tension spot for Guests having to wait for people paying to ride the attraction.

The speed and technology of Disney’s security have developed in wonderful ways, but we love that nothing beats the trustworthy K9 unit! Disney’s four-legged security can be spotted around the Park entrance as they are trained to sniff out drugs and bomb elements.

Recently, a family visiting Disneyland Park was asked to help with a K-9 bomb-sniffing exercise. The mother of the family was nervous, but all went well as shared in the video. @gabriellegutierr took to social media to share “Disney’s K-9 unit asked us to help them with a K-9 bomb sniffing training. Why was my mom so nervous acting like an actual criminal?”. Check out the video below:

Way to go, Disney K-9 Unit! Thanks to all of the Cast Members, Security Guards, and beloved dog Guards for keeping the Parks safe for families to enjoy.