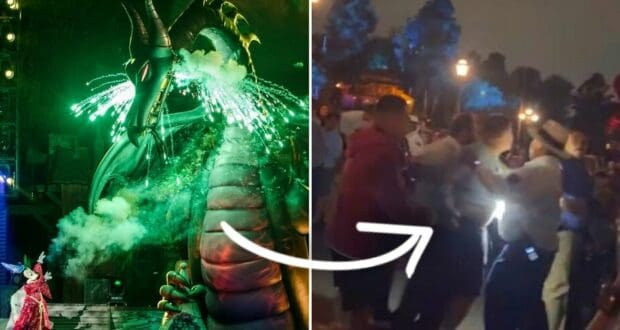 VIDEO: Fight Breaks Out at Return of Disney’s Fantasmic!

Well, Disney fans. It’s nothing we haven’t reported before, but once again, a video of a fight breaking out at a Disney Park is going viral. This time, the fight reportedly took place at the return of Disney’s beloved nighttime spectacular, Fantasmic!

RELATED: Guests Are Mocked As Ridiculous Fight Breaks Out In Walt Disney World

Even though we are still awaiting word on when Walt Disney World Resort will return Fantasmic! at Disney’s Hollywood Studios, we do know Disney has promised it will be sometime in 2022. With very little update on Fantasmic’s progress, we are left living through the excitement of west coast Disney fans, as Fantasmic! has officially made its return to Disneyland Resort.

Last night, on Saturday, May 28, 2022, “Fantasmic!” returned to Disneyland Park. Unfortunately, when large crowds gather incidents happen and Fantasmic’s grand opening night seemed no different from the rest as Disney Guests broke out into a fight.

As first reported by InsideTheMagic, we’re seeing two social media posts of the fight. The first video is going viral on TikTok with the note, “thought I was at Knotts Berry Farm for a sec” as posted by @najyrae. Check out the video below:

RELATED: Yet ANOTHER Fight Breaks Out at Disney, This Time at Toy Story Land

Another angle of the first was posted by @nickdean707 after someone Tweeted, “A huge brawl just happened near Pirates.” Disneyland’s Pirates of the Caribbean attraction and Fantasmic! are located just across from one another, with Fantasmic! being located in the Rivers of America.

Here’s the second video posted in the tweet below:

RELATED: Security Guards Now In Rides Due to “Guest Fights Over Lightning Lane”

We’d love to think with the return of something like Fantasmic!, Guests would be in high spirits with the return of Disney magic in the air! Of course, it is Memorial Day Weekend which boasts a mixture of large crowds within the Disney Parks and high temperatures which could be the cause for some to reach their boiling point. Regardless, Disney is NOT a place to take out frustrations with families and young children present.

What officially caused the fight and how it was resolved is still unknown. It does look like Disney Security jumped in quickly to resolve the issue hopefully keeping the incident from ruining the Disney experience for those around.