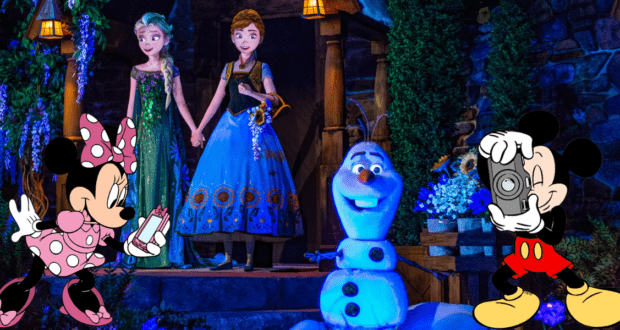 Walt Disney World is no secret to celebrity sightings. You’d be surprised to find out just how many celebrities love visiting Disney Parks. One former heartthrob visits Hollywood Studios with his family so often that he even created a sandwich inspired by this classic Disney restaurant’s salad. Of course, some famous people visit more often than others, making it even more exciting when an elusive celebrity is spotted. As for Josh Gad, he made his appearance at Walt Disney World known by himself on social media.

Earlier this week, the star behind one of the Frozen series’ most iconic and lovable characters visited Walt Disney World, and he took a few videos of his adventures as he traveled from Disney Park to Disney Park.

What goes up must get wet. #SplashMountain @Disney Parks

Over in Disney’s Magic Kingdom, he shared a point-of-view video of himself taking a dive on Splash Mountain (which will soon close to make way for Tiana’s Bayou Adventure). He writes, “What goes up must get wet” in the caption of his video.

Making his way to Disney’s Hollywood Studios, he shared a video from Oga’s Cantina in Star Wars: Galaxy’s Edge. In the caption, he writes, “Possibly the best bar I’ve ever been to.” The official Disney Parks TikTok account replies in the comments, writing, “The BEST DJ in the galaxy.”

Although these videos are funny and sweet, the most wholesome video Josh Gad posted was another point-of-view as he rode EPCOT’s Frozen Ever After. As Olaf sings his song, Josh Gad turns the camera around to himself and playfully says, “Sounds good!”

It’s always exciting to see celebrities visiting Walt Disney World, but it’s even better to see them having as good of a time as Josh Gad had this weekend!