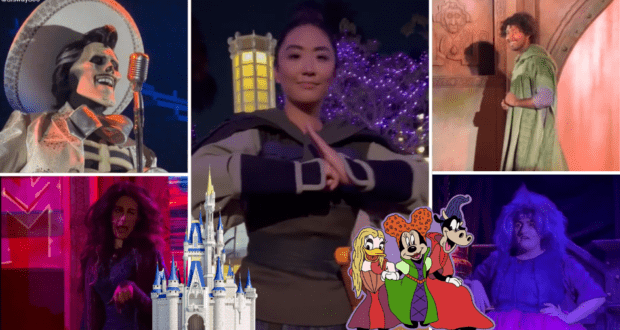 Disneyland has been pulling out all the stops at this year’s Oogie Boogie Bash. Disney Tips recently shared two brand new characters that fans were hyped to see at the event. Bruno from Encanto (2021) and Ernesto de la Cruz from Coco (2017) have been blowing Guests away since the Halloween soirée opened!

Bruno has a meet-and-greet set up near Grizzly River Run in Disney California Adventure, while Ernesto de la Cruz performs some of the classic Coco songs on his own stage, complete with guitar and microphone. The character is quite a sight to behold in his elaborate mask as he serenades Guests in front of a stunning backdrop that mirrors the movie.

TikTok creator @BeyondDisway shared some other characters Guests have been excited to see, including Agatha Hartness, who returns to DCA, much to the excitement of Wandavision (2021) fans. A classic character from The Sword in the Stone (1963), Madam Mim has also been wowing Guests with her amusing performances.

Disney video game enthusiasts will be thrilled to learn that Mickey and Donald are available for photo ops in their Kingdom Hearts attire at a prime spot featuring Pixar Pal-A-Round in the background. Some other notable characters include Hercules (1997), Dr. Facilier from The Princess and the Frog (2009), and Mother Gothel from Tangled (2010).

With news of all these incredible characters at Disneyland Resort, Walt Disney World fans are hoping that one, in particular, will make its way to Florida. Ping from Mulan (1998) surprised Guests at Oogie Boogie Bash with an unexpected and thrilling appearance!

In the film, Mulan disguises herself as a man, taking on the identity of a soldier named Ping. Walt Disney World Guests were recently treated to a different rare character from Mulan at EPCOT. Li Shang joined the princess warrior in an interaction located at the China Pavilion in World Showcase.

♬ Mulan: I’ll Make a Man Out of You – Geek Music

Now, Guests are hoping that Ping will join their lineup for a meet-and-greet in Florida! Out of all these incredible Disney characters, who would you most like to see at Walt Disney World Resort?

2022-09-08
Christy Weinberg
Previous: Disney’s Iconic EPCOT Attraction Is Closing Indefinitely
Next: Disney Pays Tribute to the Queen With the News of Her Death