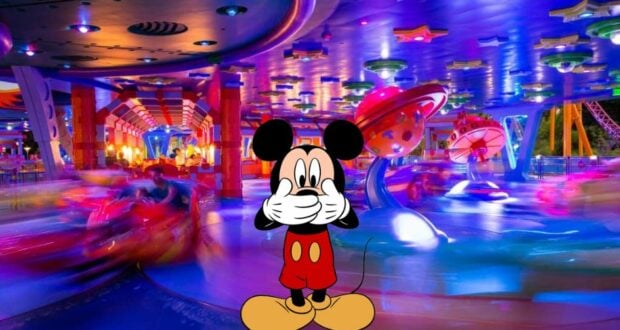 Don’t Tell Mickey, but We Always SKIP These Disney Rides

Walt Disney World Resort fills its four theme parks with numerous attractions and experiences, making riding and experiencing everything nearly impossible. But, if we’re being completely honest, there are some Disney rides we always skip. We’re listing the top two rides we skip in each Disney Park. Sorry in advance if one of your ride favorites makes our list!

We’re so sorry Walt! While we understand that likely at one point in time the Enchanted Tiki Room was a pretty cool Magic Kingdom attraction experience, it just isn’t for us. Known for its tropical birds, tiki gods, and colorful flowers that come to life in a “swinging South Seas musical extravaganza” – this one is hard for us to sit through.

We will say the air conditioning and seats do make for a nice break on a hot day, but even then we’d rather find a different air-conditioned ride over this one.

Also located in the Adventureland portion of Magic Kingdom Park, Swiss Family Treehouse is one we are sure to skip with each visit. Guests have a chance to explore the ultimate treehouse inspired by the classic Disney film, Swiss Family Robinson (1960).

With all the walking done already in the Parks, we prefer not to climb a treehouse to add to our step count. Now, we will say that this Disneyland Resort version of this attraction is getting a facelift and is rumored to have an Encanto (2021) theme. If Magic Kingdom’s treehouse gets an Encanto theme, we will need to check it out again.

Moving along to EPCOT where excitement surrounds its four neighborhood transformation! A fairly new experience called Awesome Planet is one we’ve done once but now skip with each visit. The 10-minute film features imagery from across the globe with narration about how to keep this awesome planet awesome.

We enjoy the air-conditioning but it’s an easy place to nod off with its lackluster show. With the film being near attractions including Soarin’ and Living with the Land, it’s hard to put this one anywhere near the level of what you’d expect from a Disney attraction.

Another film makes our list of EPCOT skips. Impressions de France is located around the World Showcase in the France Pavilion. The 18-minute film showcases France but it’s another attraction that is very slow and hard to sit through.

Looking for something a little more exciting? Impressions de France showtimes rotate with a Beauty and the Beast Sing-Along which brightens the spirits of the dull theater!

This one will likely entertain the kids in your travel party, but still makes our list of experiences to skip at Disney’s Hollywood Studios. With Hollywood Studios brimming with must-do attractions, there is no need to waste time at Vacation Fun.

The animated Mickey Shorts Theater features animated shorts starring Mickey and Minnie Mouse. The experience is no different from watching a Mickey short on your phone while standing in line for a different attraction at Disney’s Hollywood Studios.

Head on over with us to Toy Story Land at Disney’s Hollywood Studios. Time and time again we see long lines for Alien Swirling Saucers. While the intergalactic spin with the adorable aliens from Toy Story is cute, it’s definitely NOT worth the wait in the least bit.

The short Disney World ride has fun music and movement for young ones in the family, but we’d suggest spending the wait for another attraction such as its neighboring Toy Story Mania attraction.

Strolling along to Disney’s Animal Kingdom! We LOVE water rides, but Kali River Rapids is not what we were hoping for. This water ride neighboring Expedition Everest has a great message about the importance of keeping our lush jungles healthy, but the whitewater adventure is somewhat of a flop.

The long wait and super short ride are a disappointment. With one big dip, one person in the party will likely get wet while the others are sprinkled here and there. A Disney Resort pool swim is a better choice!

In the DinoLand U.S.A. portion of Disney’s Animal Kingdom, Guests will find a dinosaur version of Dumbo. Similar to Dumbo the Flying Elephant at Magic Kingdom, TriceraTop Spin is a copycat of the ride but lacks that iconic feel that goes along with Dumbo.

With Primeval Whirl gone from this portion of the Disney Park, DinoLand U.S.A. feels like an empty piece of the Park with TriceraTop Spin doing little to nothing to boost the empty feeling.

Here’s the deal. These may be the Disney rides we skip, but as with anything at Walt Disney World, we still recommend Disney Tips readers to decide for themselves what’s a favorite for the family on your Disney World vacation! If you’re running short on time, however, it would be our tip to save these for last.