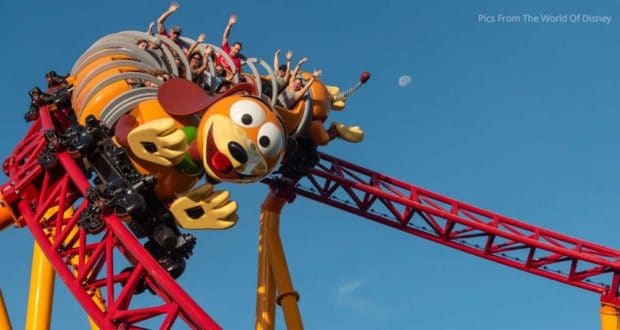 First Things We Do When Arriving at Disney’s Hollywood Studios

Hooray for Hollywood and Hooray for Disney’s Hollywood Studios! Opening its gates in May 1989 as Disney’s MGM Studios, this park has experienced a lot of changes!  As the theme of the park shifted focus from a production studio environment to one featuring attractions inspired by the greatness of Hollywood, the name changed as well to Disney’s Hollywood Studios. What was once treated like a park that only required a half of a day now became a park filled with attractions worthy of spending an entire day in, or even more!  With a park full of amazing things to do, see, and eat, what should you do first? Make the most of your time and check off my list of must-dos for a day filled with silver screen fun!

Prepare for the hot Florida sun by taking the time and applying sunblock before you start the day’s activities. The benches and restrooms by the Celebrity 5 & 10 at the beginning of Hollywood Boulevard are a great spot to take care of this.

Hollywood Boulevard, full of glitz and glamour, is a great spot to pose for a group picture as you start your day. Make sure you get the famous Chinese Theater in the background!

3. A Swinging Way to Start the Day

As you go through the security checkpoint and the entry scanners and step foot into the excitement happening on Hollywood Boulevard, keep your ears open for the energetic big band music that floats throughout the area. Popular in the 1940s into the postwar era, this music is perfectly matched to the theming of Disney’s Hollywood Studios.

The Trolley Care Café on Hollywood Boulevard is the perfect spot to fuel up on coffee and pastries before hitting the attractions. Get there early; this place is very popular!

If you’re on a mission to check out the park’s newest attractions, like Mickey and Minnie’s Runaway Railway, Slinky Dog Dash, or Millennium Falcon: Smuggler’s Run, it’s smart to head over to these attractions first to get a good spot in line.

As you enter the park, Hollywood Boulevard is lined with great shops to check out, like Mickey’s of Hollywood and Keystone Clothiers. Sunset Boulevard features more great selections, like Once Upon a Time, and Legends of Hollywood. Decide which shops you’ll want to check out later, or stop in now while they aren’t busy.

Make sure you have the Play Disney Parks app downloaded on your phone when you begin your day at Disney’s Hollywood Studios. The app has fun trivia games to play while you’re waiting in line and neat features that interact with attraction queues. You can use it in all the Walt Disney World parks, but it’s an amazing way to explore Galaxy’s Edge, interact with the droids, and translate the languages the residents speaking here!