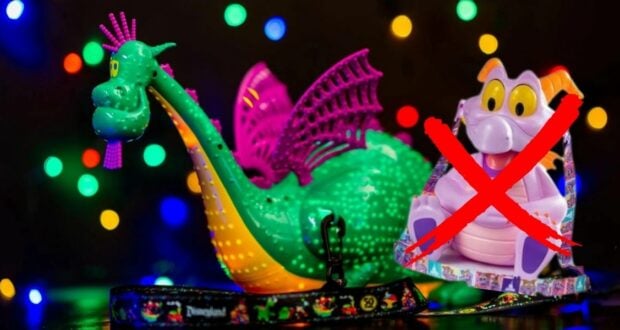 On April 22, Disney’s Main Street Electrical Parade and fireworks spectacular Disneyland Forever will return to Disneyland Park, while World of Color will finally dazzle once again in Disney California Adventure.

And now, Disney has revealed some new merchandise that gives Disney World’s infamous Figment Popcorn Bucket a run for its money! During the International Festival of the Arts at EPCOT theme park in Walt Disney World, Guests would wait upward of 7 hours for the new Figment Popcorn Bucket. Back on January 19, the popular buckets sold out, disappointing many fans of the little purple dragon and his attraction Journey Into Imagination With Figment, starring Eric Idle. When Disney restocked Figment at EPCOT, Guests could use the Mobile Order feature on the My Disney Experience app to get their hands on one, but he immediately sold out once again.

Well, move over Figment, because a new dragon-themed Popcorn Bucket is making its way to Disney Parks soon! These two new Main Street Electrical Parade commemorative pieces will be available at various locations throughout Disneyland Park during the Summer season.

To celebrate the 50th anniversary and return of the dazzling Main Street Electrical Parade, Disney had previously revealed a brand-new dining package and collection of merchandise to honor the classic nighttime parade, and now, we have some cute souvenirs heading to Disneyland Park.

The Light-up Turtle Premium Sipper features the iconic glasses and comes with a strap full of cute designs. We can almost hear the musical soundtrack and see the turtle whizzing around when we look at this little turtle sipper!

Disney has yet to share pricing details, but if the popcorn bucket is anything like EPCOT’s Figment one, it should cost Guests around the $25 mark. And just like Walt Disney World’s Figment bucket, expect Elliot to sell out pretty quickly. Disney has limited sales to two per person, per transaction while supplies last, and also revealed that availability may vary throughout the season.

The original parade and its classic soundtrack debuted at Disneyland in California back in 1972 and ran until 1996, while Disney California Adventure Park hosted the parade between 2001 and 2010. The Magic Kingdom Park at the Walt Disney World Resort saw its Main Street Electrical Parade run between 1977 and 2016, with the parade inspiring numerous versions in Disney Parks around the world, including the Tokyo Disneyland Electrical Parade: DreamLights and Hong Kong Disneyland’s  Paint the Night Parade.

With just about one week to go before all these nighttime shows make their dazzling return, we can’t wait to get our hands on one of these Light-Up Popcorn Buckets!