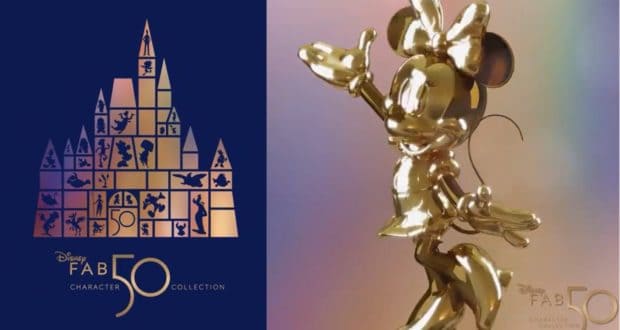 As the countdown for “The World’s Most Magical Celebration” continues, Disney is hard at work making preparations complete for the 50th Anniversary celebration of Walt Disney World. The special festivities kick off on October 1 and last for a full 18 months. Yes, that’s one long party! We’re looking forward to the two new nighttime spectaculars including “Disney Enchantment” at Magic Kingdom and “Harmonious” at EPCOT. But, not only will the sky be lighting up, you’ll also be able to see stunning golden sculptures of favorite Disney characters! That’s right – “Disney Fab 50” sculptures will be arriving shortly at Walt Disney World. The character sculptures will be spread throughout Walt Disney World’s four theme parks. We’ve been counting down the 50 characters, with Disney now revealing 31 of the 50 so far. Even though this latest addition is no surprise as she was included in Disney’s initial art rendering below, we are still thrilled to see Minnie Mouse has officially been announced as a “Fab 50” character!

As the Castle slots (shown in the image above) continue to fill in, Disney has announced #31 in the “Fab 50” character lineup! As shared via shopDisney Twitter: “@jmaruyama has confirmed that Minnie Mouse is part of the “Disney Fab 50 Character Collection” that you’ll soon find across the four @WaltDisneyWorld theme parks during “The World’s Most Magical Celebration” starting October 1! #DisneyWorld50”

A big welcome to the stunning Minnie Mouse! You’ll be able to find this Minnie at Magic Kingdom Park beginning October 1. Here’s the lineup of Disney characters included in the “Fab 50” sculptures thus far:

With only 19 sculpture reveals remaining which Disney characters are you hoping to see added to the “Disney Fab 50” lineup? We’ll keep sharing the news about which characters are included as Disney keeps the Fab 50 countdown rolling.