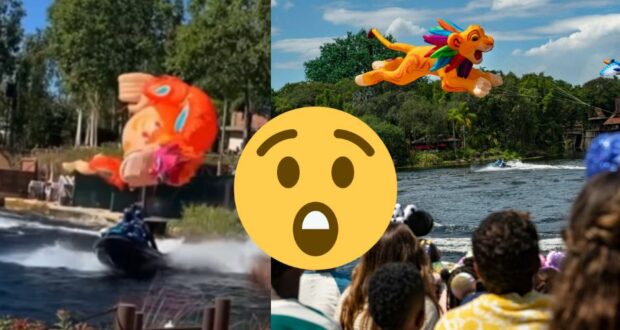 During a performance of Disney KiteTails at Disney’s Animal Kingdom Park, fans were shocked to see the beloved King Louise kite from Disney’s The Jungle Book (1967) have his arm ripped off during flight.

At Disney’s Animal Kingdom, Guests are once again enjoying the return of the live stage show, “Finding Nemo: The Big Blue… and Beyond” in the DinoLand U.S.A. portion of the Park. Guests are also thrilled to see the tumble monkeys and flying birds have returned for the “Festival of the Lion King” in the Africa portion of the Park.

But, if there is one show that has Guests on the edge of their seats… it’s Disney KiteTails. Disney KiteTails is notorious for hiccups as the new show in honor of Walt Disney World Resort’s 50th Anniversary takes kites flown by jetskis around the small lagoon near Expedition Everest.

The former Rivers of Light nighttime show closed in this location and it seems like Disney is working to fill the void, but we’re not sure KiteTails is it as the massively, uncontrollable kites featuring Disney characters soar through the air for a crash landing.

Now, a recent video posted on June 20, 2022, shows the huge King Louie kite coming in for his landing… only to have his arm torn off! @everythingdisney133 took to social media with the video as shown below:

Disney KiteTails is said to “Take Magic to New Heights,” with two shows held daily that introduce colorful kites of two Disney animated classics, including Simba and Zazu from The Lion King (1994) and King Louie and Baloo from The Jungle Book (1967).

The concept is a fun way to fill Discovery River Amphitheater with life again, but the kites are so unpredictable that it leads to a terrifying yet humorous Disney experience to watch. Poor King Louie!