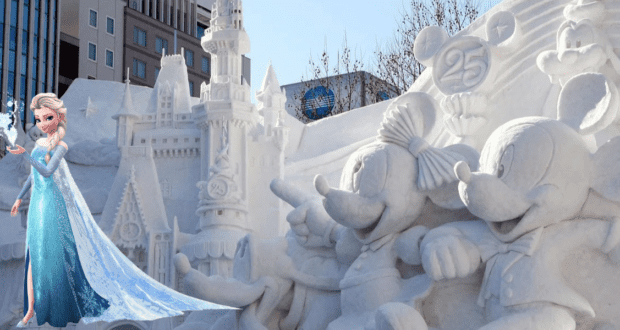 Disney to Host a Snow Sculpting Competition for the First Time

Whilst we haven’t yet celebrated Halloween, it really isn’t so far away, and then before you know if Christmas will be upon us! The Disney D23 Expo is taking place this weekend in Anaheim Convention Center and is bringing exciting news to Disney fans everywhere.

News just in is that the there are some new and exciting shows on Disney+ this holiday season that will help to add a little more magic to the joyous-filled season of the year. Let’s take a look at one that has caught our eye, after being announced at the Epic Entertainment Showcase: The Extravaganza! panel yesterday.

Tituss Burgess will host the show as Mayor Frostifur von Fford, as teams from around the world join him in a magical snowy village known as Snowdome. In this unscripted Holiday special, teams will compete against each other to win the title ‘Best in Snow’. Working alongside  some of the finest carvers, each team will transform snow into a stunning creation. Watch as 10-foot, 20-ton blocks of snow are transformed into characters and scenes from Pixar, Marvel, The Muppets Studio, Walt Disney Animation and Walt Disney Studios. Moana (2016), Coco (2017) and The Lion King (1994) are said to be just some of the creations that the teams will work on. Kermit the Frog and DCappella will also join together to form the Town Carolers, who will no doubt bring favorite Christmas songs to the festive show. The show will make the perfect viewing especially if a snow day arrives! Whilst a date is yet to be confirmed for when Best in Snow will debut on Disney Plus, we do know that it is amongst other new additions that will be added to the streaming service for the 2022 holiday season. Other new additions include the new Disney Christmas movie series, The Santa Clauses, starring Tim Allen, and an extended edition of The Muppet Christmas Carol. Stay tuned as we keep you up-to-date with the latest news and announcements from the D23 Expo, that runs through to September 11.

2022-09-11
Victoria Mills
Previous: First Look at Disney’s NEW Attraction Coming to Avengers Campus
Next: Get Ready for A Magical Holiday Season on Disney+