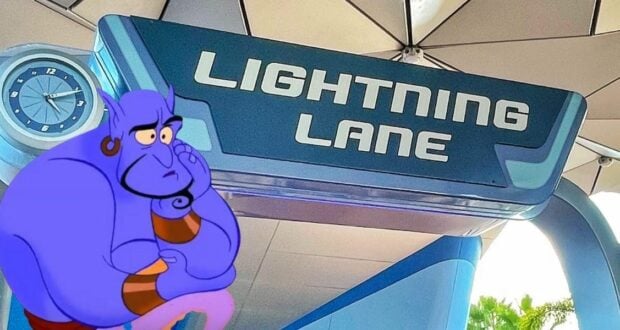 Whether you love it or hate it, Disney Genie and Lightning Lane have become a new part of our Disney Park experience.

At Magic Kingdom, EPCOT, Disney’s Hollywood Studios, Disney’s Animal Kingdom, and Disneyland Resort theme parks, the Disney Genie tool has changed the face of the FastPass system, bringing with it a whole range of divided opinions from Disney Guests.

Now, a new message to Guests about Disney Genie has seemingly highlighted some behind-the-scenes concerns and issues from The Walt Disney Company.

Disney Genie officially launched on the My Disney Experience app at Walt Disney World and Disneyland back in October and December 2021 respectively, along with Disney Genie+ and Lightning Lane access – the new costly version of what was previously the beloved FastPass service. At Walt Disney World, the Genie+ feature costs an extra $15 per person, per day, with Individual Lightning Lanes costing more, while at Disneyland Resort in Anaheim, it costs $20 per person, per day.

With new technology to help Guests plan their day, the digital tool has been suffering controversy following its launch From sold-out attractions like Star Wars: Rise of the Resistance at Galaxy’s Edge to app failures on their cellphones, some Guests have judged the system as substandard to the original FastPass system.

Recently, Disney Parks seemed to lower Guests’ expectations about its Disney Genie service with a change to the small print of the service, warning Guests that they’ll probably only get “2 to 3 attractions or experiences per day using the Lightning Lane entrance if the first selection is made early in the day.”

And now, a strange push message on the My Disney Experience app truly seems to show that Disney knows its new Disney Park FastPass system is not working. Today, April 17, many Guests received a warning when opening the Disneyland app informing them to double-check if they really wanted to utilize Disney Genie and Lightning Lane: 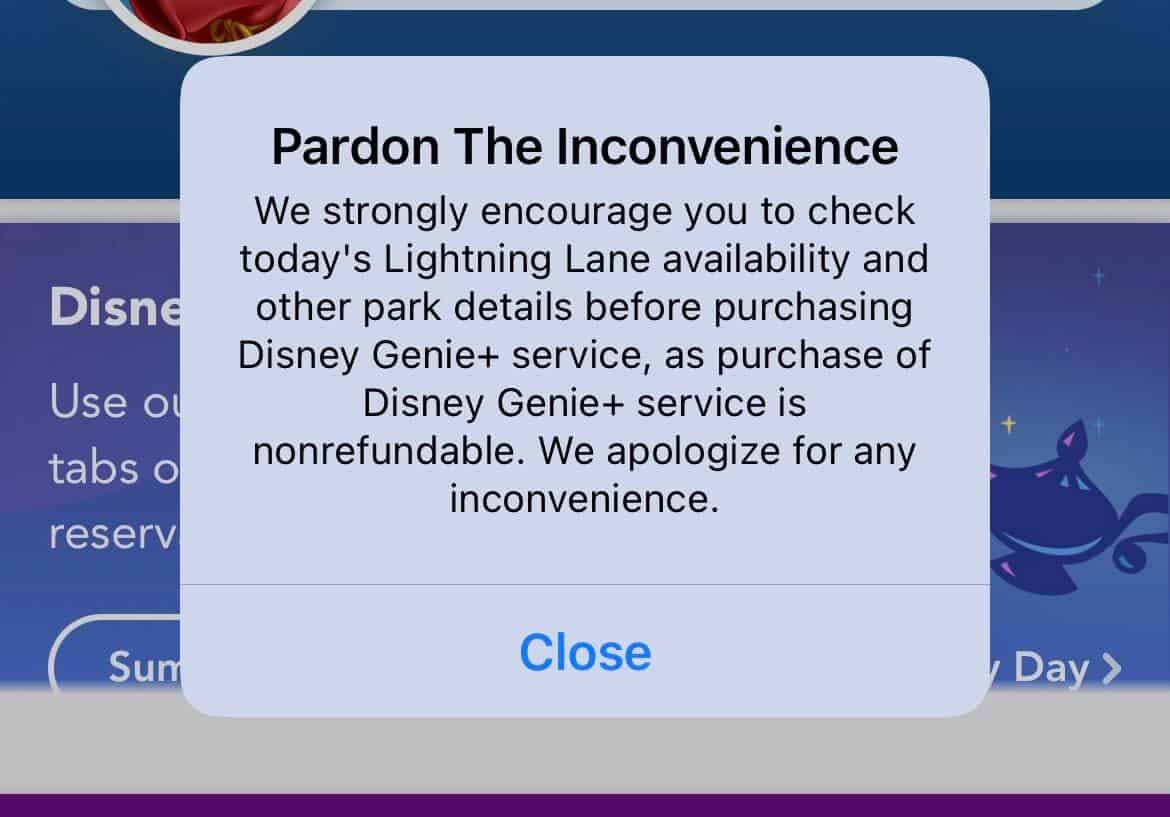 Obviously, with today being a holiday, crowds are expected to be high to celebrate Easter in Disneyland Park, Disney California Adventure, or Walt Disney World’s theme parks.

But with Disney still operating the Park Pass Reservation system to help manage crowds and attendance at the Parks, we’re confused as to why Disney would suddenly push this warning to Guests. With so many other packed days and book out Park Pass reservations, why is today so different?

It appears, along with the fine print change in March, that Disney is aware that Disney Genie+ and Lightning Lanes have issues – and may even highlight that Disney is getting numerous requests for refunds each day. The reminder that “Disney Genie+ is nonrefundable” seems to show that Guests Relations are dealing with many disappointed customers.

This raises another question – is Genie+ suffering from more complaints than FastPass ever did? We don’t remember ever seeing so many warnings regarding the free FastPass theme park offering. If a ride or attraction ran out of FastPass reservations, we all understood it was a free, first-c0me, first-serve system. If you’re paying for a service, you expect to be able to get reservations to skip multiple stand-by lines each day.

Alongside the new Park Pass Reservation system, trying to get a Lightning Lane reservation on Disney Genie+ has been a top issue for many Guests at the Walt Disney World and Disneyland Resorts. Waking up at 7 a.m. to attempt to secure decent timeslots for a Disney Genie ride, followed by constant refreshers every 2 hours to get another reservation, means many Guests are left disappointed with their Disney Genie reservations. Many Guests argue: “why did Disney change something that already worked?”

FastPass was evidently free and Guests could often get multiple FastPasses per day – and for the same ride. Disney Genie+ does not offer the option to ride the same attraction more than once, which adds another disappointment.

Individual Lightning Lane attractions that have to be paid for separately often sell out, and Disney has already made changes to Disney Genie to account for crowds. Park Pass Reservations have been selling out in advance and so from February 25, Disney moved four popular attractions to Disney Genie+ from the Individual Lightning Lane experience list. Space Mountain at Magic Kingdom, Frozen Ever After at EPCOT, Expedition Everest at Disney’s Animal Kingdom, and Mickey & Minnie’s Runaway Railway in Disney’s Hollywood Studios are all now a part of the standard $15 a day per Guest Disney Genie+ service. 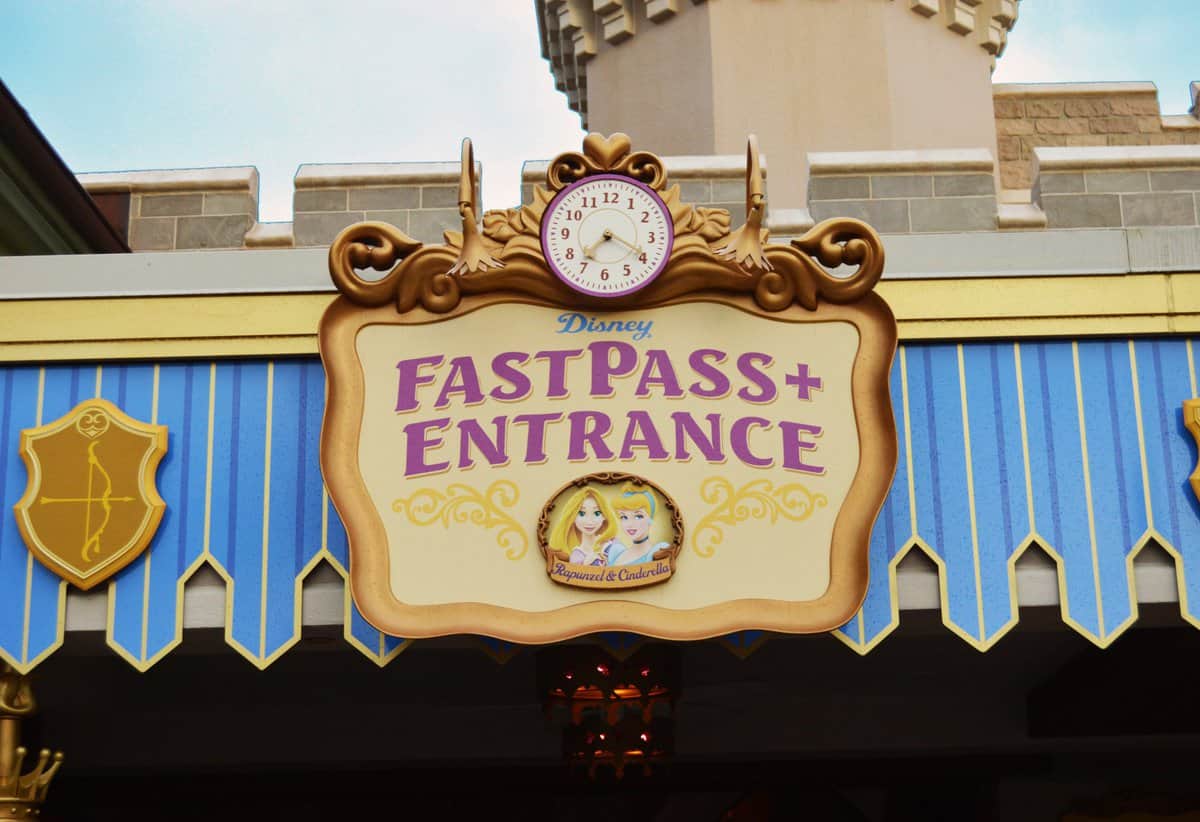 One issue Disney Genie appears to have is that to get more money, Disney Parks oversells Disney Genie+. There likely needs to be a cap on Genie+ sales to limit the number of people who can join the Lightning Lane queue, avoiding issues like today where Disney advises Guests not to get Genie.

It will be interesting to see what comes next for Disney Genie and Lightning Lane, particularly when Guests believe that new Disney CEO Bob Chapek is continuously after ways to get more money from theme park Guests.

It is rather strange for a company to acknowledge the shortcomings of its own product like this. The bottom line is that Disney seems to be becoming more aware of how overwhelming and disappointing Disney Genie is for many new and returning Disneyland and Walt Disney World Guests.

2022-04-17
Melissa Cannioto
Previous: The EPCOT Early Entry Trick You May Never Have Heard Of
Next: You Know Walt Disney World Is Busy When These Attractions Have A Long Line