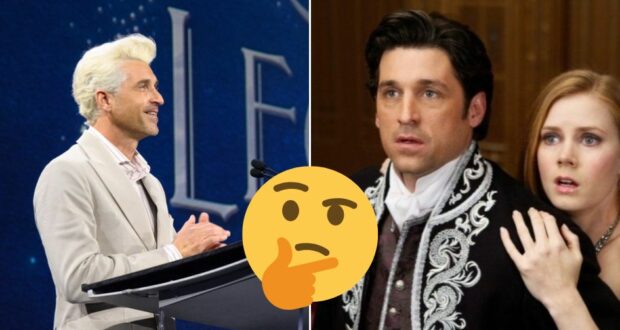 What on Earth Is Going On With Patrick Dempsey’s Hair?

The 2022 D23 Expo has wrapped up, and Disney fans still taking in all the news and experiences The Walt Disney Company offered during the Expo. From news of a Villain’s Land at Magic Kingdom Park to new nighttime shows at Disneyland Park, it’s a great time to be a Disney fan. Amid the excitement, Patrick Dempsey is getting attention… for his HAIR!

It was a big weekend for the talented American actor, Patrick Dempsey. He was honored as a Disney Legend for his involvement with Disney in many ways including his role as Derek Shepherd in the ABC sitcom Grey’s Anatomy and well as playing Robert Philip in Enchanted (2007), along with the upcoming Disenchanted film coming to Disney+ on November 24, 2022.

As Disney called up its Legends during the Legends ceremony on September 9, photos of the stunning Dempsey flashed up on the screen from films and shows. But, to the surprise of the audience, as Dempsey came into focus, everyone was quickly whispering about his bleached, white hair.

RELATED: The Disney Legends Fail No One Is Talking About

This wasn’t the usual silver look many of us are used to seeing Dempsey style, but instead, his hair was white… a very, bright white.

Deadline got to the bottom of the surprising hair-do by reporting, “Dempsey is playing Piero Taruffi, the Italian race car driver who won the 1957 Mille Miglia, in Michael Mann’s upcoming Ferrari. The movie also stars Adam Driver, Shailene Woodley and Penélope Cruz.”

Alas, have no fear, Patrick Dempsey fans! It sounds like Dempsey bleached his hair all for the film role.

Are you a fan of the bright white hair, or do you prefer Dempsey’s regular hairstyle? Either way, good for him to take the stage to receive his Disney Legends award with a shocking hair change that surprised his fans.