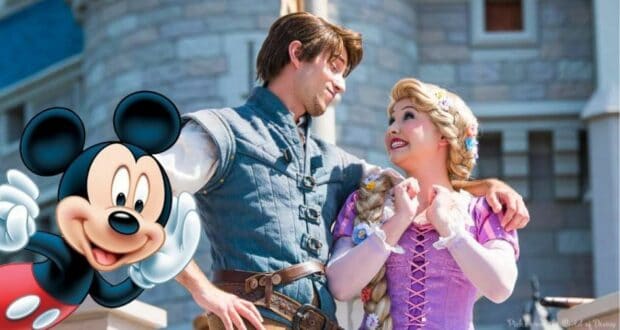 Disney Is Reportedly Working on a New ‘Tangled’ Attraction

What’s one Disney film that you feel would make for an excellent attraction in the Disney Parks? With attractions themed in Disney’s theme parks around the globe featuring classics such as Snow White and the Seven Dwarfs (1937), The Little Mermaid (1989), and Beauty and the Beast (1991) – it would be nice to see a little Rapunzel in the mix!

Exciting news as reports now state that Disney is currently working on an attraction featuring the animated classic film, Tangled (2010). That’s right – it looks like Princess Rapunzel and Flynn Rider (Eugene) may be featured in a new attraction.

According to a report from Outsidears, they are sharing the “first plans and visuals of an attraction based on the world of Rapunzel which will take place between the current Walt Disney Studios and the future lake where the Park’s future night show will be played” at Disneyland Paris.

The report notes, “The attraction, which will take over the scene of the lanterns from the movie Rapunzel, would be a “tea-cups” type attraction from the Italian manufacturer Zamperla. The latter would be technically very close to the “Mad Hatter’s Tea Cups” attraction from the same manufacturer and located in Fantasyland. Forget the cups, you will take your place aboard wooden boats to twirl around in the middle of hundreds of lanterns, all in a covered building but open on all of its different facades.”

While we want to say this Disney Park information is confirmed, Disney has yet to make the announcement about the Tangled-inspired attraction. We suspect Disney may be making an announcement at the upcoming D23 Expo in September.

All Rapunzel has over at Walt Disney World Resort are Tangled-themed restrooms in Magic Kingdom Park, along with the beautiful Rapunzel tower next to the restrooms near “it’s a small world.” We’d love to see Rapunzel get her own attraction at Disneyland Paris and hope it will be popular enough for Disney Parks in Florida or California to consider the addition!

In the meantime, Princess Tiana is the talk among Disney fans for both Walt Disney World and Disneyland Resort as Splash Mountain is being rethemed to The Princess and the Frog (2009) attraction opening in late 2024 as “Tiana’s Bayou Adventure.”

As always, we’ll be sure to keep our readers here on Disney Tips updated as we learn more about these exciting reports of a Tangled attraction.

2022-08-30
Jamie Sylvester
Previous: Guests Can Now Purchase Snacks Inside This Iconic Disney Attraction
Next: Pumpkin Spice Season Has Arrived! Here’s What to Order at Starbucks in Disney Parks