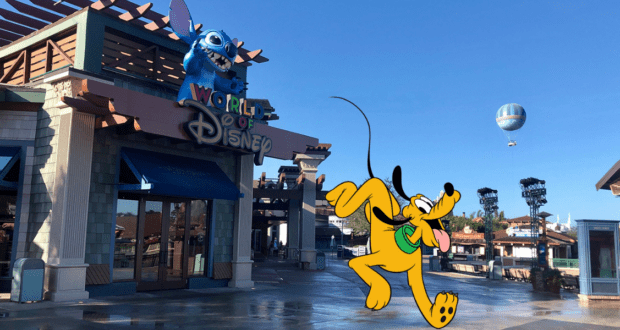 Burn Those Disney Calories With These Running Routes!

Taking a vacation is a real treat, especially when you’re visiting Walt Disney World. From staying in beautiful Resort hotels to adventures in the Disney theme parks, treating yourself to Disney merchandise, and indulging in all of the delicious Disney food – there is never a dull moment during a vacation in Lake Buena Vista.

Whilst you’re guaranteed to rack up the miles when it comes to walking around the Disney Parks, it’s not quite the cardio that you sometimes need. If you’re like us at Disney Tips, you need a workout every now and then during a Walt Disney World vacation to help you feel a little less guilty for all of the indulging you are doing. For the avid runners out there, it’s also refreshing to get the chance to run a different route to those that you normally take. 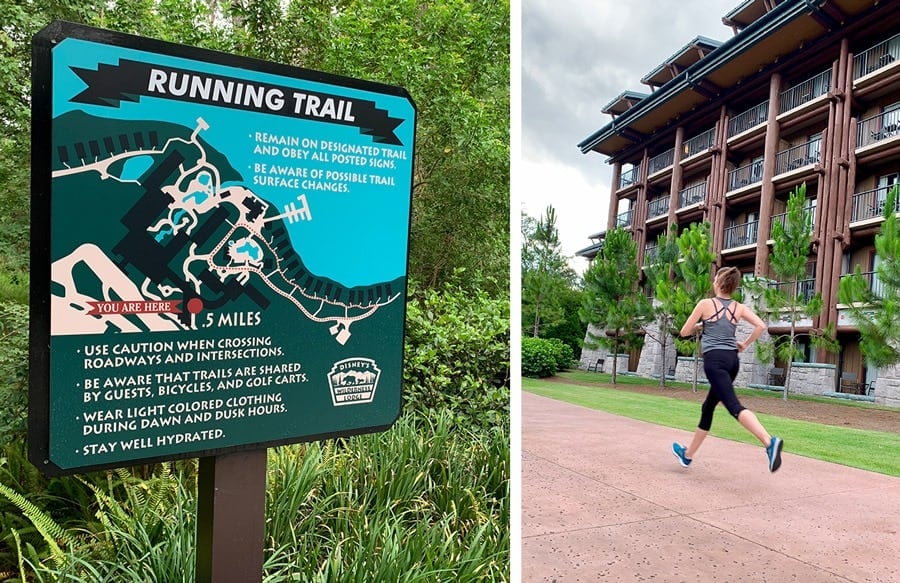 So you may be wondering where the tried and tested routes are to enjoy a 5K during your Disney vacation? Let us share some of our favorite places to fit a 5K into your Disney experience. We’ll also let you know where we like to take a post-run rest!

There are several Walt Disney World Resort hotels that offer jogging trails to Guests. Hosted by New Balance, these routes can certainly act as a guide to your run; however, don’t be surprised to find that most of the suggested trails are less than 2 miles long. You can find the suggested New Balance routes at the following Disney Resorts:

We’ve tried and tested the routes listed above and have added to them to create great trails to run if you’re aiming for at least a 3.1-mile route. 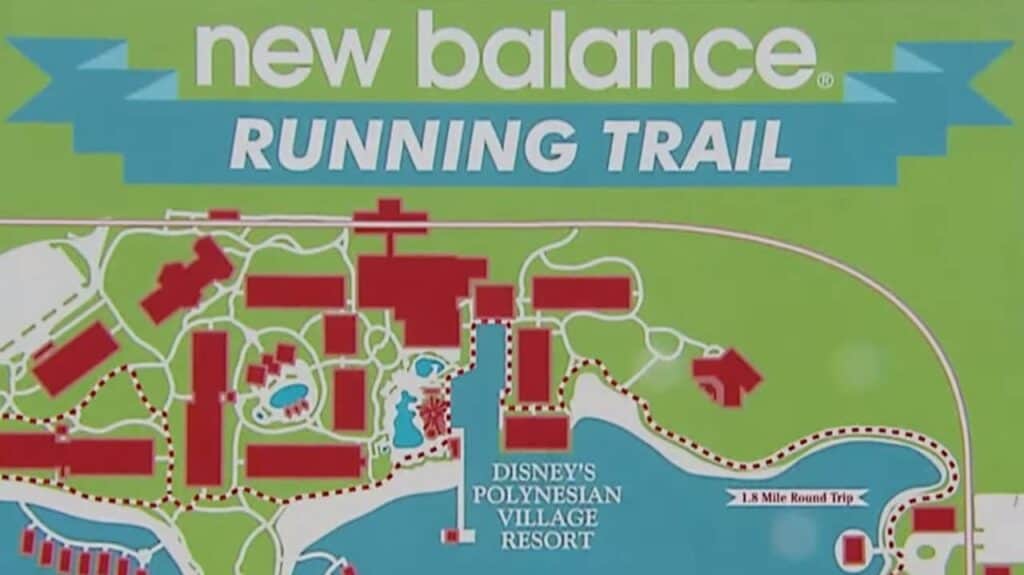 Whether you’re staying in the French Quarter or down by the Bayou of Riverside, you won’t be disappointed by the running trail on offer here. You will mostly have a view of the serene Sassagoula River, with the odd sighting of the boats heading to and from Disney Springs. Make sure to wave to the Guests on their way down the river as they sail past.

If you’re starting at Disney’s Port Orleans French Quarter Resort, run along the romantic, cobbled streets, between the wrought-iron buildings and fragranced foliage. Weave around the beautiful courtyards, before following the path alongside the Sassagoula River. You’ll soon reach Disney’s Port Orleans Riverside Resort. Follow the path clockwise around the edge of the River, first passing the Riverside Mill and the bridge across to Ol’ Man Island. Make up some distance by weaving between the buildings of Alligator Bayou, where you’ll be treated to views of quaint backwood cottages, and lush foliage.

Before long, you’ll reach the picturesque, white-column mansions of Magnolia Bend. Run amongst the trees and fountains, before heading back to the main path alongside the Sassagoula River. At the end of the path, you’ll reach a small incline allowing you to cross over the river, before joining the path where you arrived at Riverside. If you’re looking to cover a little more than 5K, take another loop of Riverside Resort. This time you could cross over to Ol’ Man Island. Alternatively, pass under the bridge back to French Quarter. 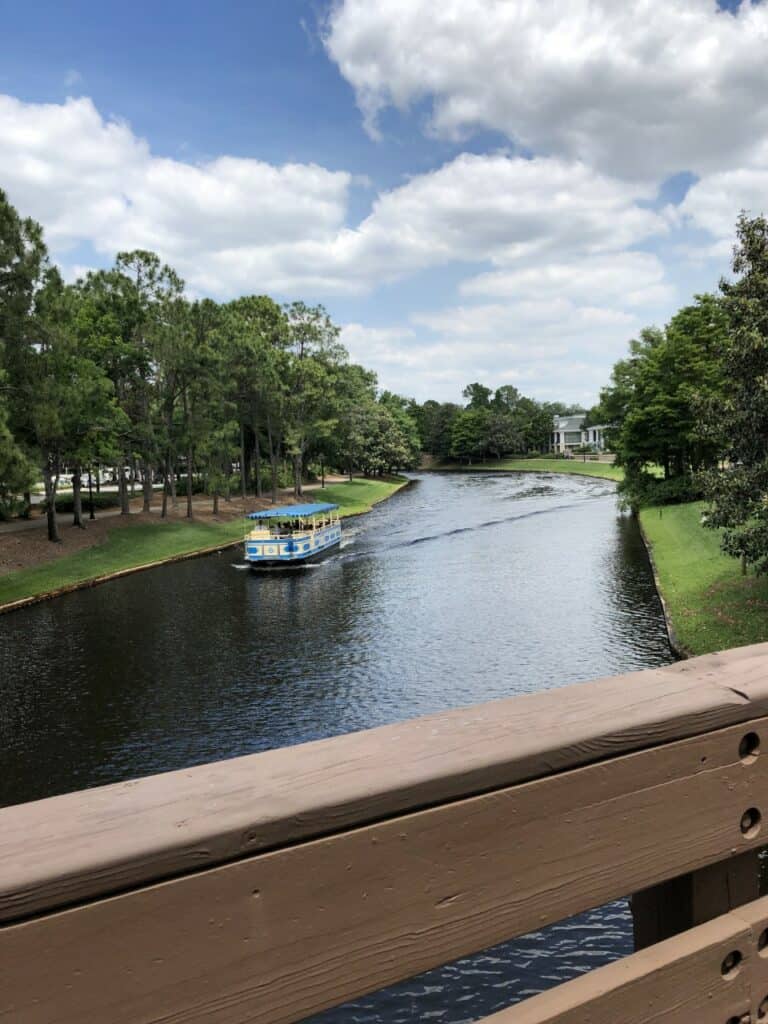 If you’re starting out at Disney’s Port Orleans Riverside Resort, follow the same route, first heading to French Quarter, before finishing at Riverside.

Disney Tips Recommendation: Run early morning, before treating yourself to some well-earned beignets for breakfast. Sunrise is a beautiful time of day to enjoy Disney’s Port Orleans Resorts. 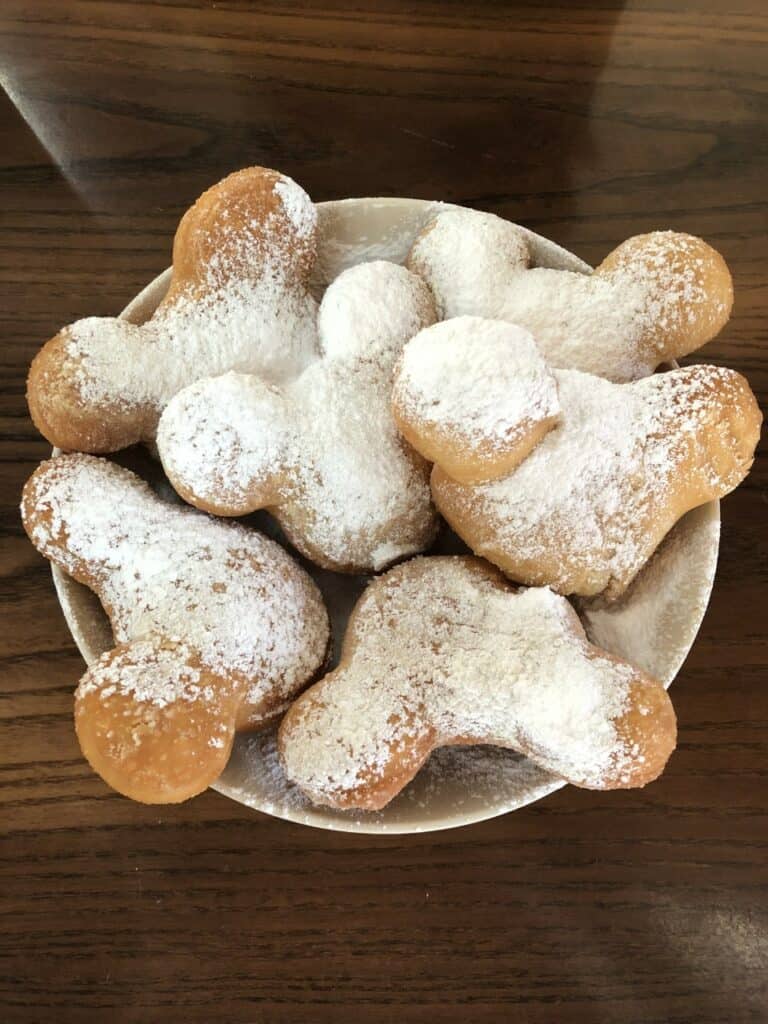 Whether you’re starting at one of the Islands in Caribbean Beach Resort or waterside at Riviera Resort, this 5K will provide you with a stunning view of Barefoot Bay. Whilst the jogging trail suggests sticking to the main path that follows the edge of Barefoot Bay, you’ll only cover 1.4-miles doing so.

We recommend crossing over the road that leads traffic out of Disney’s Caribbean Beach Resort, towards Trinidad. We like to weave between the pastel-colored buildings of this Resort before rejoining the path alongside the Bay. Why not cross over the water and run through Caribbean Bay before running through the Barbados and Jamaica sections too. Finish up, running underneath the Disney Skyliner. 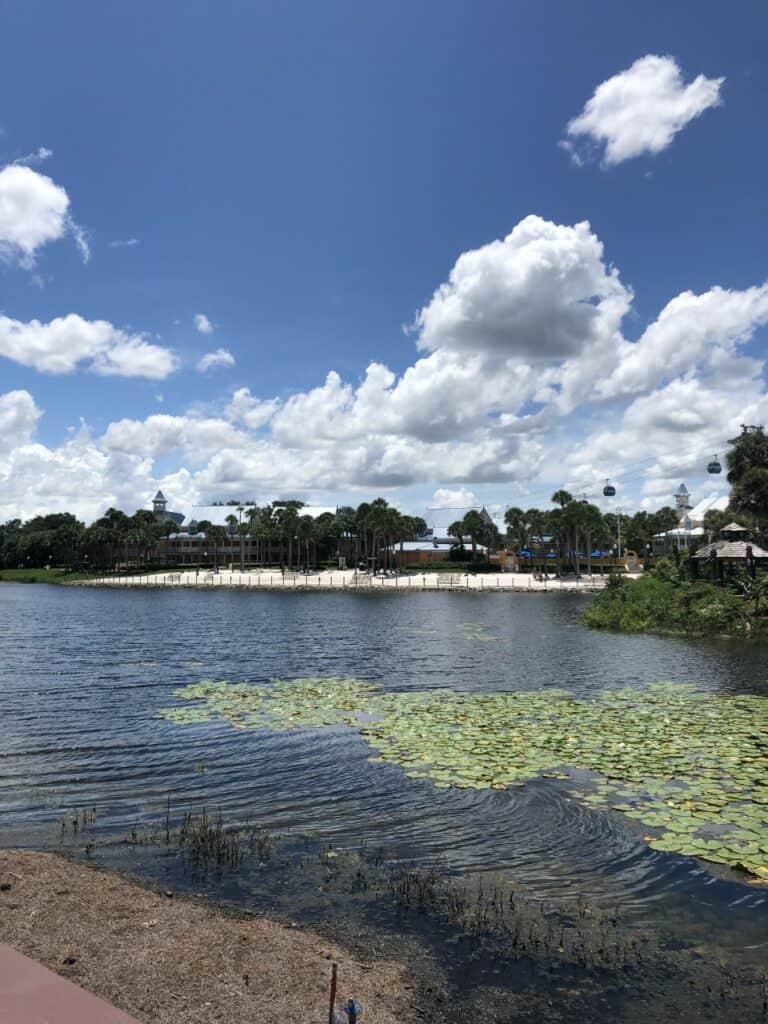 Disney Tips Recommendation: Run in the evening whilst watching the sunset over Barefoot Bay. Once you’ve completed your run, take a little time to rest in a hammock on one of the peaceful beaches at Caribbean Beach Resort.

If you’re staying on the shores of Bay Lake, then some would say you have the most magical 5K route on your doorstep. What a treat it is to be able to run between the Transportation and Ticket Center and Magic Kingdom, passing Disney’s Polynesian Village and Grand Floridian Resorts on your way.

If you’re staying in the Polynesian Village, we recommend warming up by walking to the Transportation and Ticket Center. From there, set your watch, and head back to the Polynesian, weaving through the tropical atmosphere of this Disney Resort, passing tropical vegetation and alongside the Bora Bora Bungalows. Make sure you peek at Cinderella Castle in the distance across Seven Seas Lagoon.

Follow the path around the Seven Seas Marina, before heading towards Disney’s Wedding Pavilion and towards Disney’s Grand Floridian Resort. Make sure to pass through the gardens near the Courtyard Pool at the Grand Floridian. Once you reach the Captain’s Shipyard, you’ll want to make a left before Sago Cay; pass underneath the Disney Monorail, and follow the path to Magic Kingdom. Once you reach the Disney Park, turn back and retrace your steps back to the Transportation and Ticket Center.

If you’re a Guest at Disney’s Grand Floridian Resort, we suggest taking a walk to Magic Kingdom to begin your run. This will also allow you to complete a 5K. 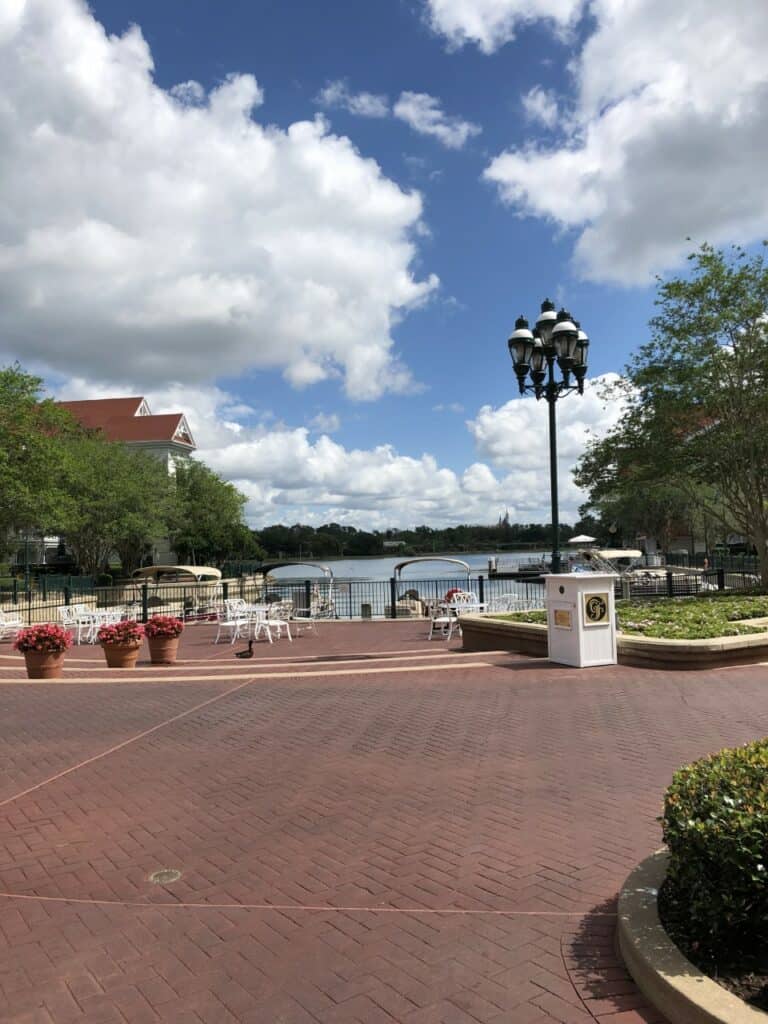 Disney Tips Recommendation: Post-run, take a few minutes to yourself on the beach at the Polynesian. Enjoy that view of Cinderella Castle across Seven Seas Lagoon. Early morning would be a great time to enjoy this running route, when there are few Guests around.

Disney’s Art of Animation and Pop Century Resorts are located on either side of Hourglass Lake. Whilst the suggested running trail at these Disney Resorts is 1.38-miles long, you can extend your run by running the outer paths of both Resorts. Make sure to pass by all themed sections of both Resorts too. You may even take the opportunity to pause for a photo as you pass the larger-than-life Disney characters featured. 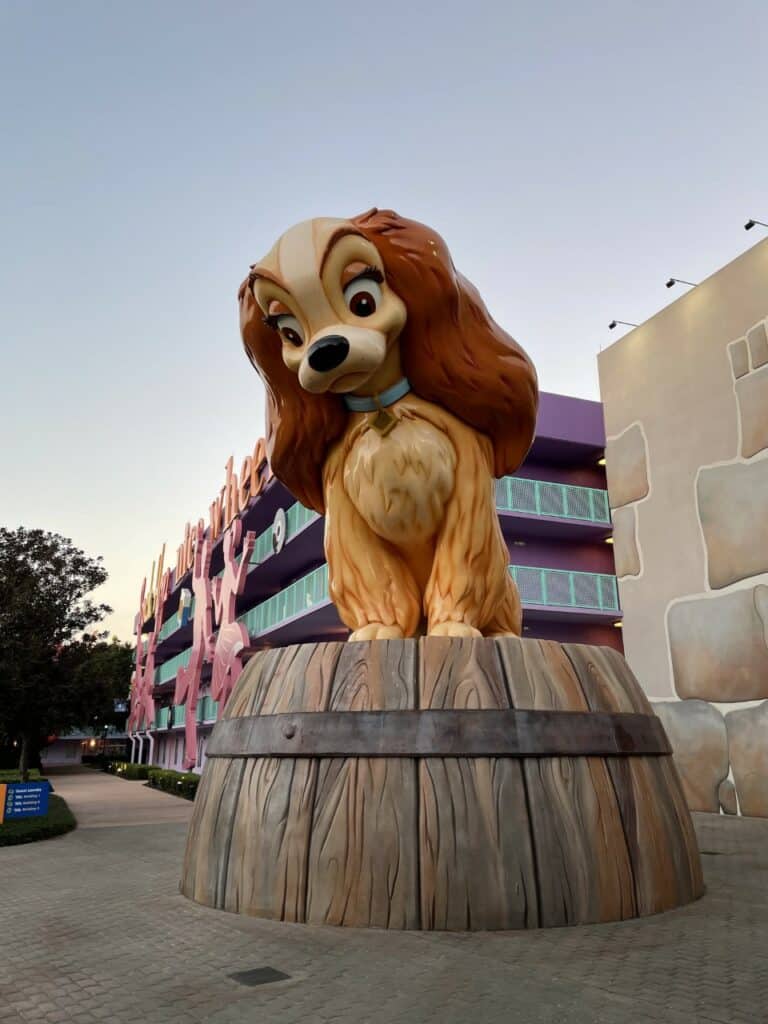 Disney Tips Recommendation: If you’d rather follow the suggested running route around Hourglass Lake, why not take a mid-run break, and catch the Disney Skyliner to Disney’s Caribbean Beach Resort? Finish the rest of your 5K around Barefoot Bay. You’ll need to make sure that the Disney Skyliner is operating before taking this option.

The Disney Vacation Club Resort that is Saratoga Springs is ideally located for you to run in Disney Springs. Whichever section you are staying in Saratoga Springs, you’ll want to head to Congress Park. The path along the waterfront of this Resort will lead to Disney Springs whilst giving you a perfect view of your running destination too. You’ll soon reach the bridge to cross to reach Disney Springs. 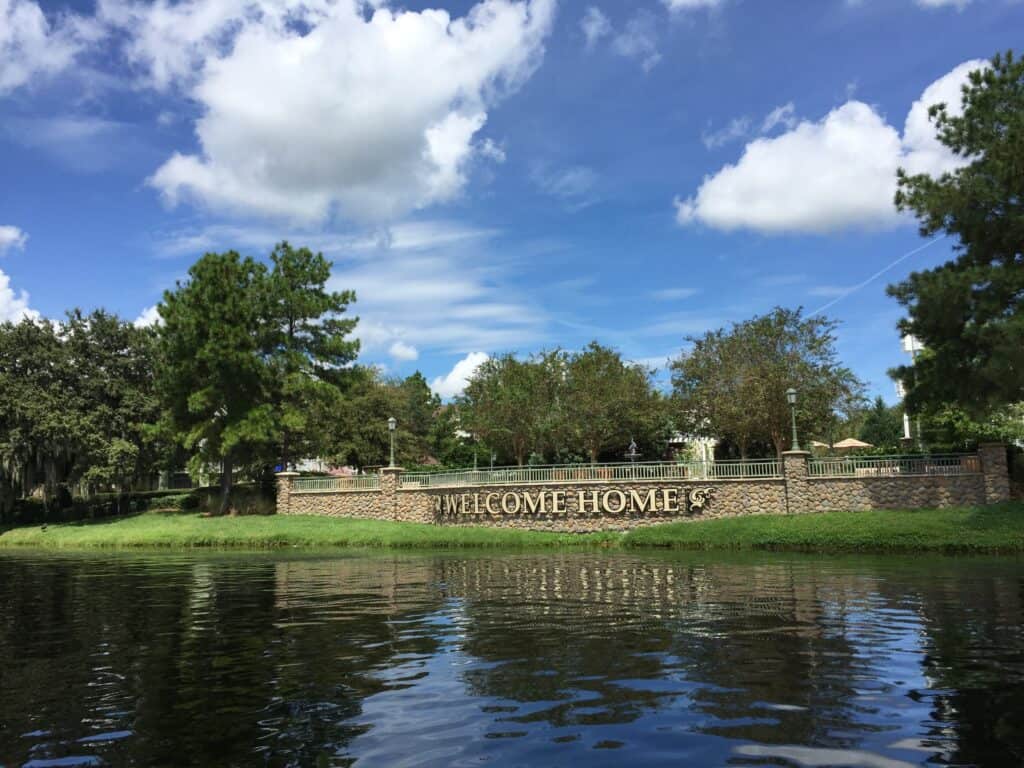 Make a right at the back of Mickey’s Days of Christmas, and run towards Rainforest Cafe. Cross over the water bridge, and complete the loop of Disney Springs, weaving through The Landing, before following the path along the waterfront at West Side.

Once you reach House of Blues, loopback and run between the restaurants and stores of the West Side. Run passed Planet Hollywood through the covered walkway to Town Center. Continue to World of Disney before passing through the Marketplace and back to Disney’s Saratoga Springs Resort.

Disney Tips Recommendation: Run this 5K route during the early morning, before Disney Springs opens. You’ll likely have the Disney shopping district to yourself. You’re sure to experience it like never before!

When staying in one of the EPCOT Resort hotels, you’re ideally located to have the opportunity to run to Disney’s Hollywood Studios and back. Located on the shores of Crescent Lake, Disney’s BoardWalk Inn, Yacht Club & Beach Club Resorts are within walking distance of the Disney theme park. The likelihood is that you’ve chosen to travel between your Resort and Disney Park using the FriendShip Boats on most occasions. But why not experience the peaceful walk, or run in this case, to Disney’s Hollywood Studios and back.

Whichever Disney Resort you are staying in, you’ll need to make a left when you reach the palm-tree-lined walkway that leads to the Walt Disney World Swan & Dolphin Hotels. Set behind the BoardWalk Villas, there is a path that runs alongside the river right to Disney’s Hollywood Studios. It’s a great stretch to run, particularly in the early morning when the sun is rising. Enjoy a view of the Hollywood Tower Hotel as you reach the Disney Skyliner Station. 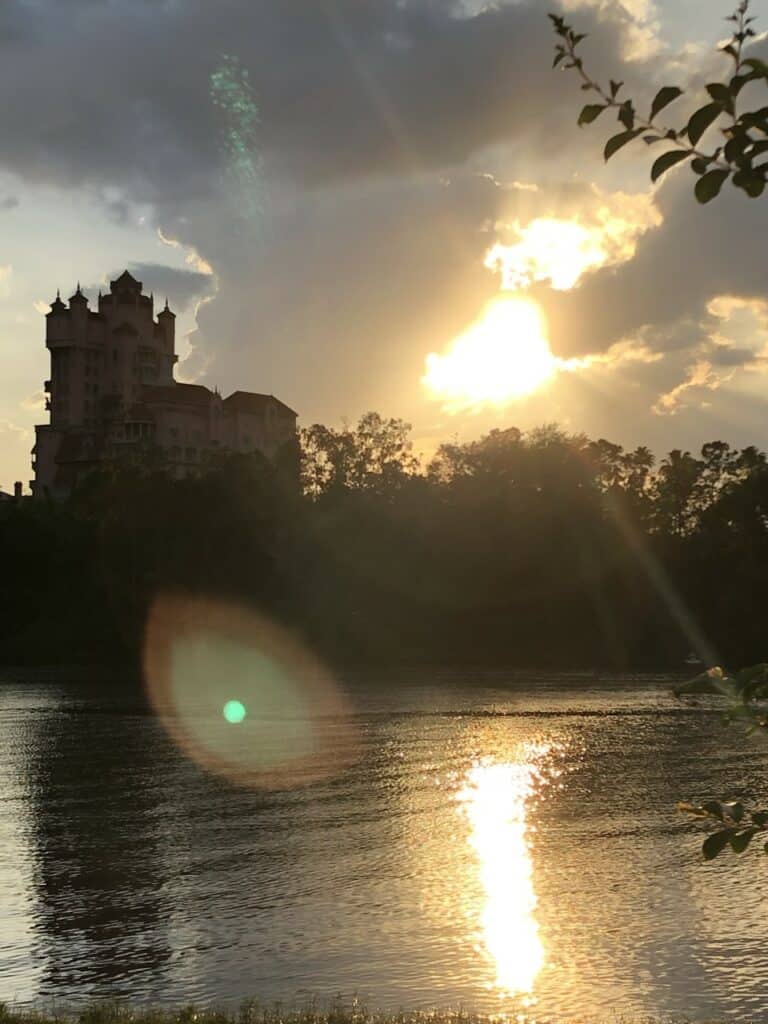 When running this area, make sure to complete a loop of Crescent Lake during your run too. This can begin or end your 5K.

Disney Tips Recommendation: Stop by the BoardWalk Bakery for a sweet treat and coffee following your run. Enjoy your breakfast from one of the benches on the BoardWalk, admiring the view of Disney’s Yacht and Beach Club Resorts across Crescent Lake. 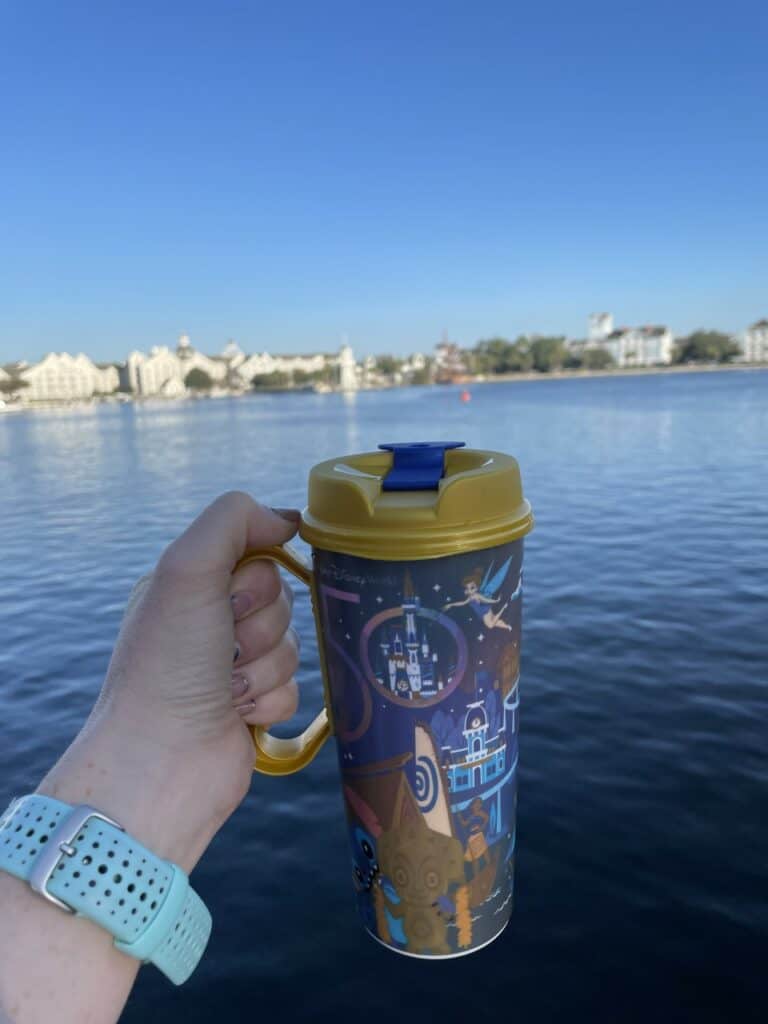 Lago Dorado is the lake that Disney’s Coronado Springs Resort surrounds. It offers perfect views that make running a 5K a little easier. We love to weave between the Casitas of this Disney Resort to add to the distance covered by running around the edge of Lago Dorado. We also include crossing the three bridges into our run. It’s a lot of fun just to follow your nose and see where it takes you next when running around this Disney Resort. 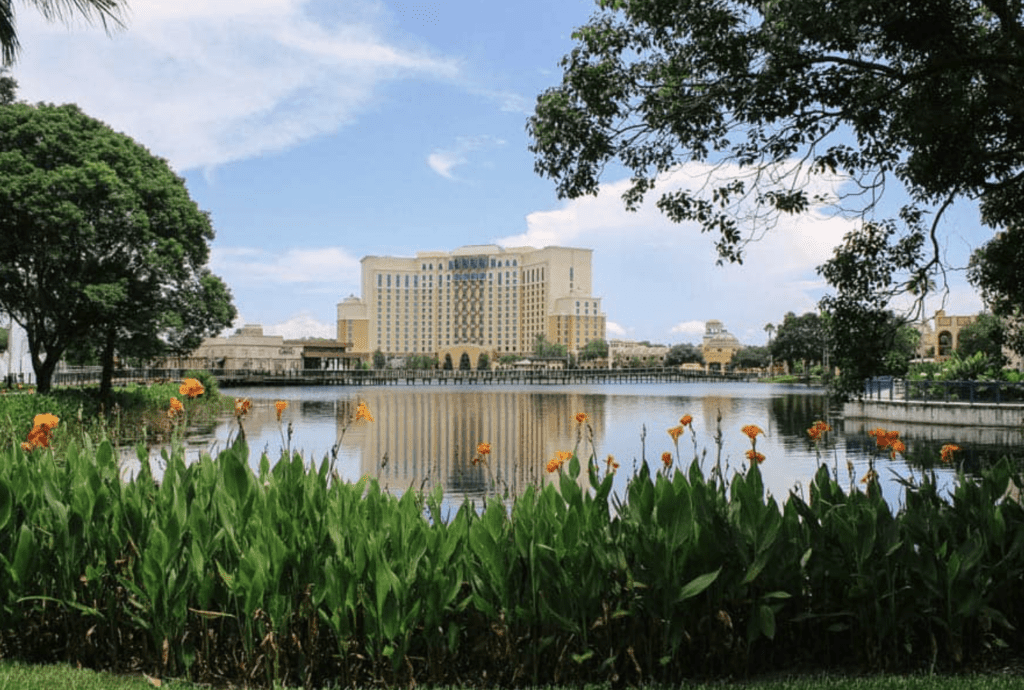 Disney Tips Recommendation: End your run with a visit to El Mercado de Coronado to pick up breakfast. They have the option to make your own breakfast yogurt bowl, which makes for a healthy breakfast following your workout. The seating area outside overlooking Lago Dorado is a glorious place to enjoy breakfast.

If you’d prefer to run at night, enjoy the reflections of the lights from Gran Destino Tower over Lago Dorado. Just watch out for the low lighting offered around this Disney Resort and fellow Guests that are using the walkways.

If you’re a Guest at Disney’s Wilderness Lodge, begin your run at the NW Dock. Run along the wooden walkway, past the Fire Rock Geyser, and around passed Boulder Ridge Cove Pool. Head towards the Bus Stop and follow the path that leads you down to Fort Wilderness. Enjoy running along the path that is lined with tall cedar and pine trees. You’ll soon reach Fort Wilderness, first passing by Trail’s End restaurant, before arriving at the Settlement Trading Post. From here, you’ll want to run along the internal bus loop before retracing your steps back to Wilderness Lodge.

If you’re beginning at Fort Wilderness, you’ll complete the run in reverse order. Both routes allow you to complete a run longer than 5K. If you’d prefer to stop after a 5K, why not catch the ferry boat from Fort Wilderness back to Wilderness Lodge, or vice versa. 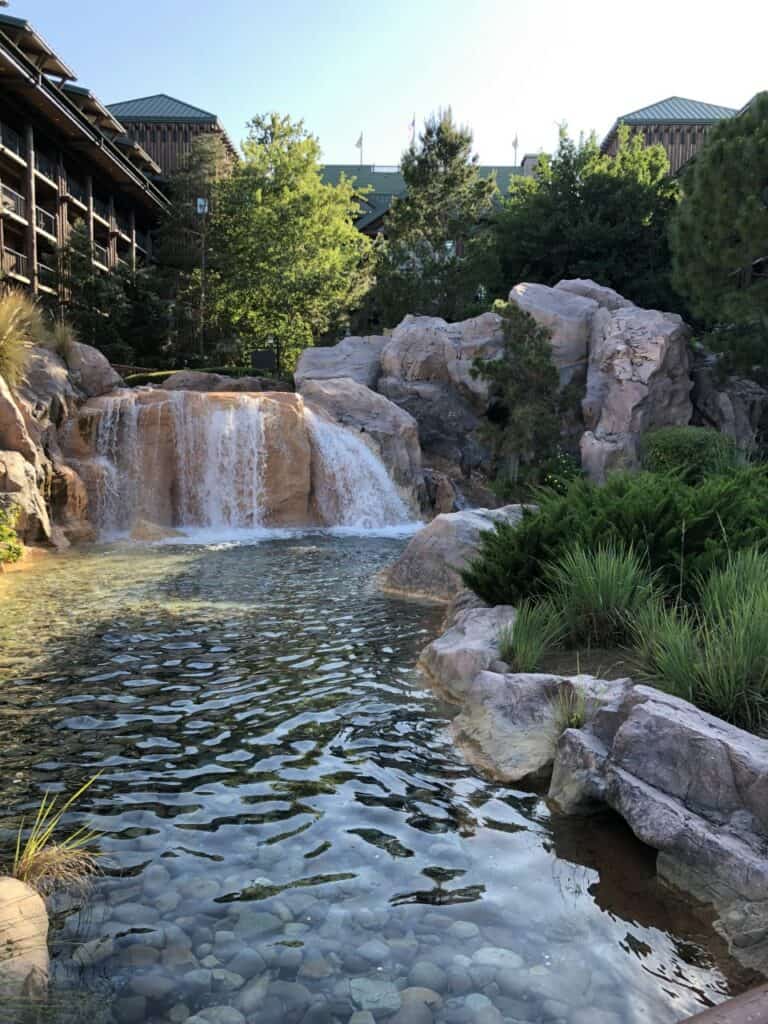 We hope you’re feeling inspired to run a 5K during your next Disney vacation. It’s a great way to experience Walt Disney World in a different way, as well as reducing the guilt you may feel from all of the indulging on Disney snacks! If you’re anything like us, you’ll welcome the chance to run a new route too. Happy running!